Last Friday, March 13th, I went to the 1st Presbyterian Church of Royal Oak, where the Ezra Parker Chapter of the National Society Daughters of the American Revolution meet monthly for lunch and their chapter business meeting. 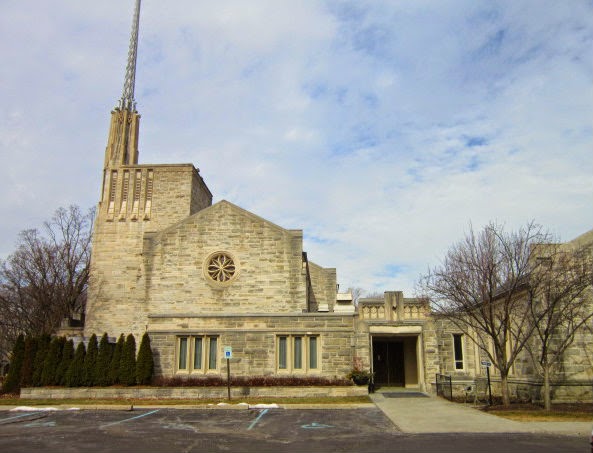 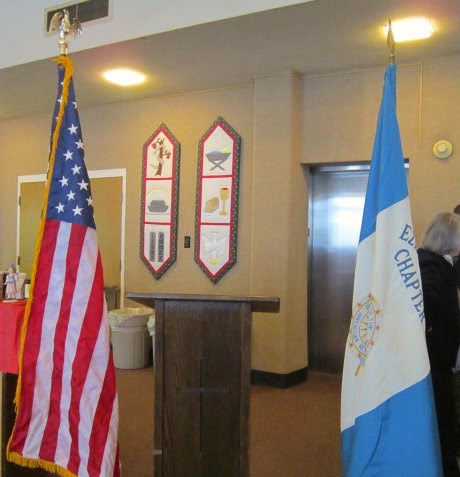 I arrived at 11:30 a.m. to set up visuals for my presentation Tea in America - Before, During, and After the American Revolution.  Lunch was scheduled for noon. 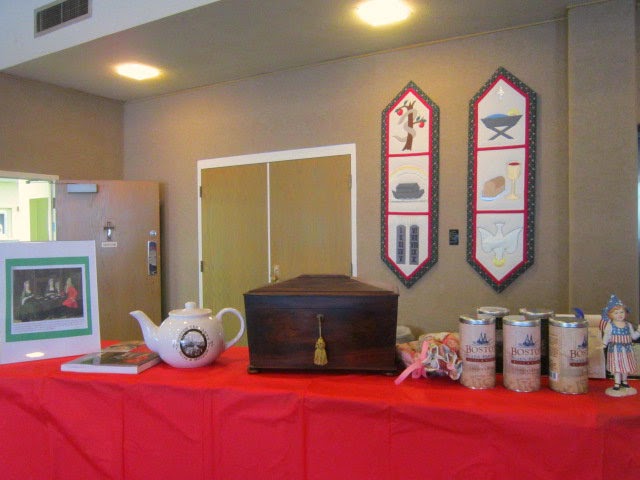 They meet once a month from September to May, and in June they have a county picnic. November is their birthday dinner where ladies come in costume.

At the monthly meetings lunch is eaten first, and the meeting follows.  Members bring their own sandwich or salad, and volunteers take turns providing the dessert.  Coffee and tea are provided with many members bringing their own teacup or mug to drink their beverage in - just like the women did back in the late 1600's and 1700's! 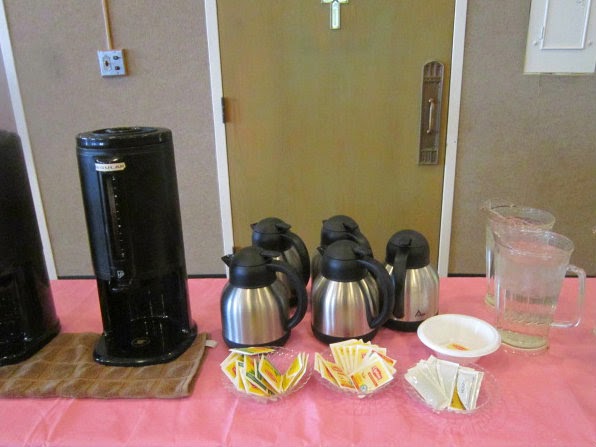 Since the topic/program this month was tea, a teapot decorated the center of each table. 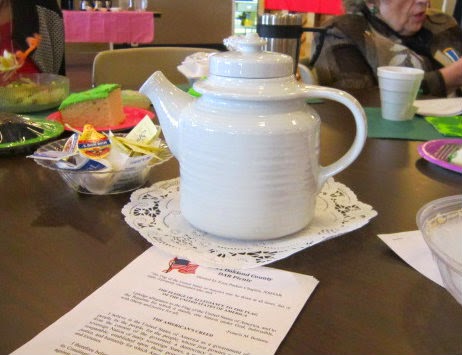 Below is the "Heritage Table" where members bring display items to coordinate with the program of the month.  Below are a few of the tea items that were displayed. 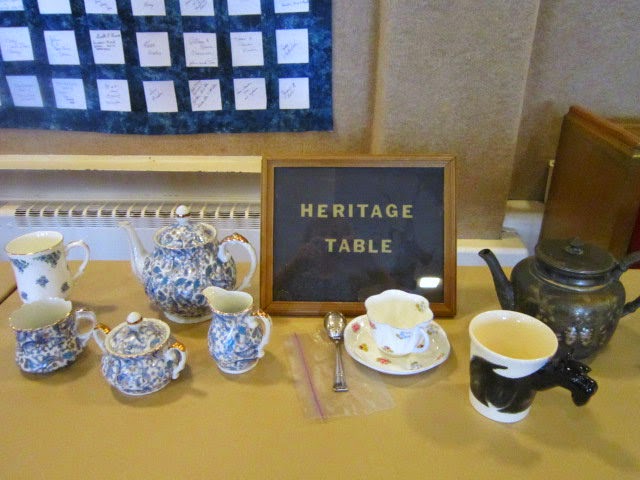 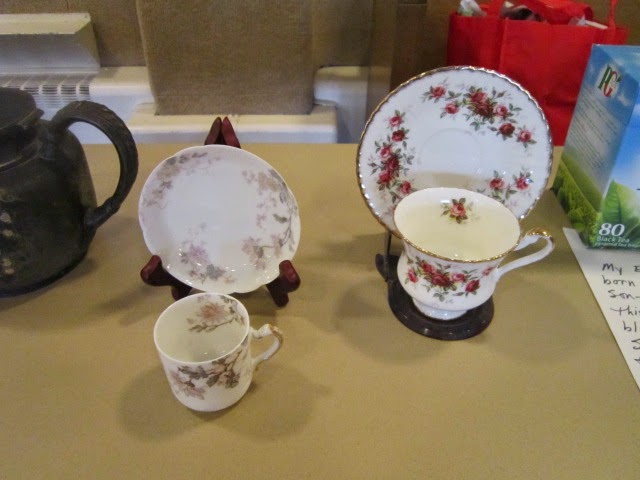 There were five tables set up for approximately 40 attendees. 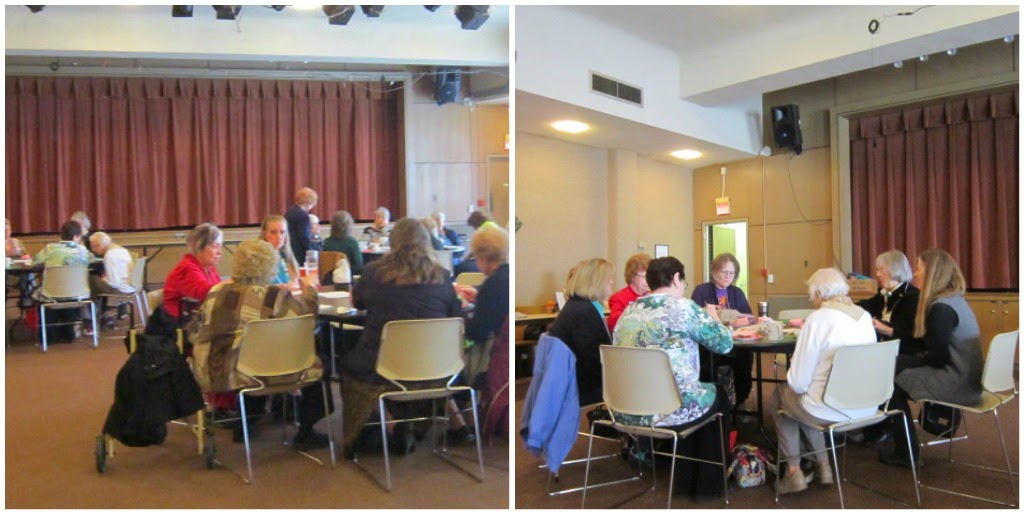 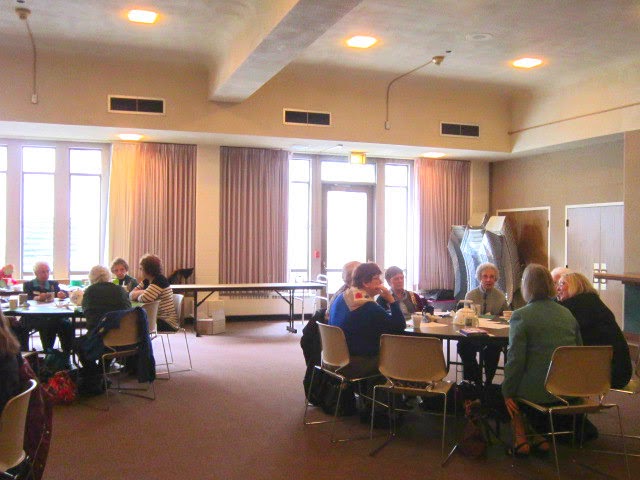 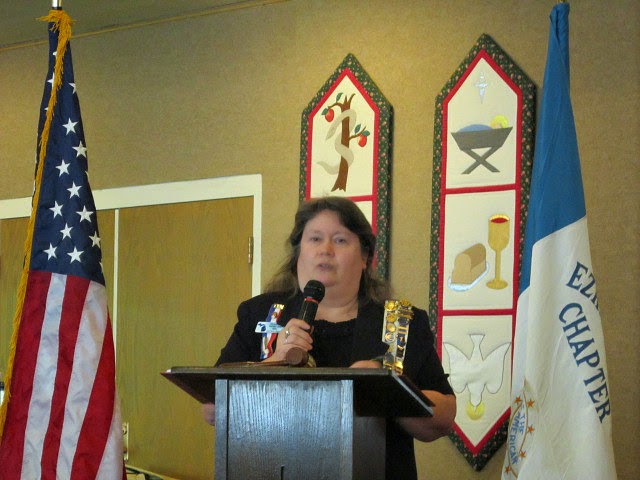 The meeting was opened with prayer by the chapter's chaplain.  Her prayer was touching as she prayed for numerous things, but especially the Girl Scouts of American who just celebrated their 103rd Anniversary on March 12th, and the families of the seven special-operations Marines who were killed in the helicopter crash off the Florida panhandle on Tuesday, March 10th. Three were from Michigan.

We said the pledge of allegiance to the American flag, sang the Star-Spangled Banner, and said the American's Creed.

I believe in the United States of America as a government of the people, by the people,
for the people; whose just powers are derived from the consent of the governed; a
democracy in a Republic, a sovereign Nation of many sovereign States, a perfect Union;
one and inseparable; established upon those principles of freedom, equality, justice,
and humanity for which American patriots sacrificed their lives and fortunes.

I therefore believe it is my duty to my country to love it; to support its Constitution; to
obey its laws; to respect its flag; and to defend it against all enemies.

I could have gone home inspired after the 'openers'.  What a wonderful organization!

My presentation was next on the agenda, and since tea played such a significant role in the American Revolution, I wondered if I'd be sharing anything new or whether it would simply be a review. The ladies were very attentive and receptive, and I think they all left with a  little something they didn't know [or had forgotten] before they came.

Thank you Ezra Parker Chapter for extending the invitation and privilege to be your guest speaker. I enjoyed my afternoon with you.  May God bless your DAR chapter, and our great country!