Daughters of the American Revolution

Last fall I was invited by a member of the Royal Oak, MI Chapter of the National Society Daughters of the American Revolution to speak at their luncheon on March 13, 2015.  The time has rolled around quickly, and is almost here.

The organization, founded on October 11, 1890, has taken me out of my comfort zone, because it's a group I've never spoken to before, nor researched, but I'm finding it very interesting.

Their National Headquarters is in Washington, D.C. [D Street N.W.].  The large city-block-long complex comprises a museum, library, manuscript room and auditorium.  I plan to visit it during my upcoming trip to D.C. in April.   I'm anxious to check out the 125th Anniversary tea wares in the gift shop! 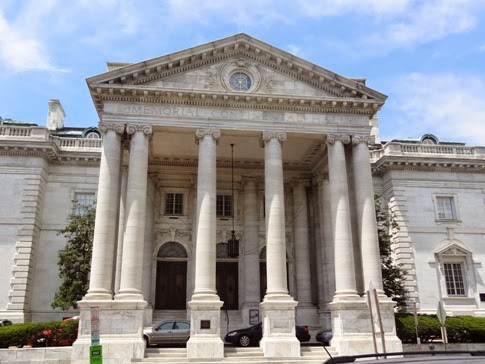 I love their motto:  "God, Home, and Country."  They definitely had their priorities straight when they founded the organization.

It won't be part of my presentation, but I enjoyed learning that ten First Ladies were/are DAR members and First Lady Caroline Scott Harrison [wife of Benjamin Harrison, 23rd President 1889-1893]  helped found the DAR and served as its first president.

Following the research for my recent Love Letters presentation, I found it interesting that DAR was incorporated by congressional charter in 1896 and signed by President Cleveland during his second term in office.  When the couple left the White House in 1893 Frances devoted her time to the care of their three daughters, and declined the role of president of DAR because of the commitment it would require.

While Bess Truman wasn't a member, six months after she became First Lady, the DAR hosted a tea in her honor.

Email ThisBlogThis!Share to TwitterShare to FacebookShare to Pinterest
Labels: Daughters of the American Revolution