When I began sharing Hudson's memories with Angela at Tea With Friends blog back in 2011, I had no idea it would take me down such interesting paths.

I've been asked to share my new-found passion with twelve different groups, which has introduced me to many new friends; I've met Mike Hauser, co-author of Hudson's Detroit's Legendary Department Store on numerous occasions; I've met J.L. Hudson, Jr., president of the store from 1961-1985, and also grand-nephew of the founder; and I've had the opportunity to tour J.L Hudson's [the store's founder] former home.  Sometimes I feel like pinching myself to make sure it's all really happening.

As I've already posted, this coming Sunday I'll be doing a Hudson's presentation in J.L. Hudson's former home on East Boston Blvd.  The Sisters, Home Visitors of Mary presently live in the house owned by the Catholic Archdiocese of Detroit, and the Afternoon Tea and presentation is a fundraiser for their extended work in Nigeria.

Even though I've presented my program numerous times, I've been studying diligently this week so I'll dot every 'i' and cross every 't' perfectly. I wouldn't want to say anything incorrect in the founder's home! ;-)  The history of J.L. Hudson and his magnificent store is so interesting. It's almost as good as reading about tea!  Below are the two books that have been great resources. 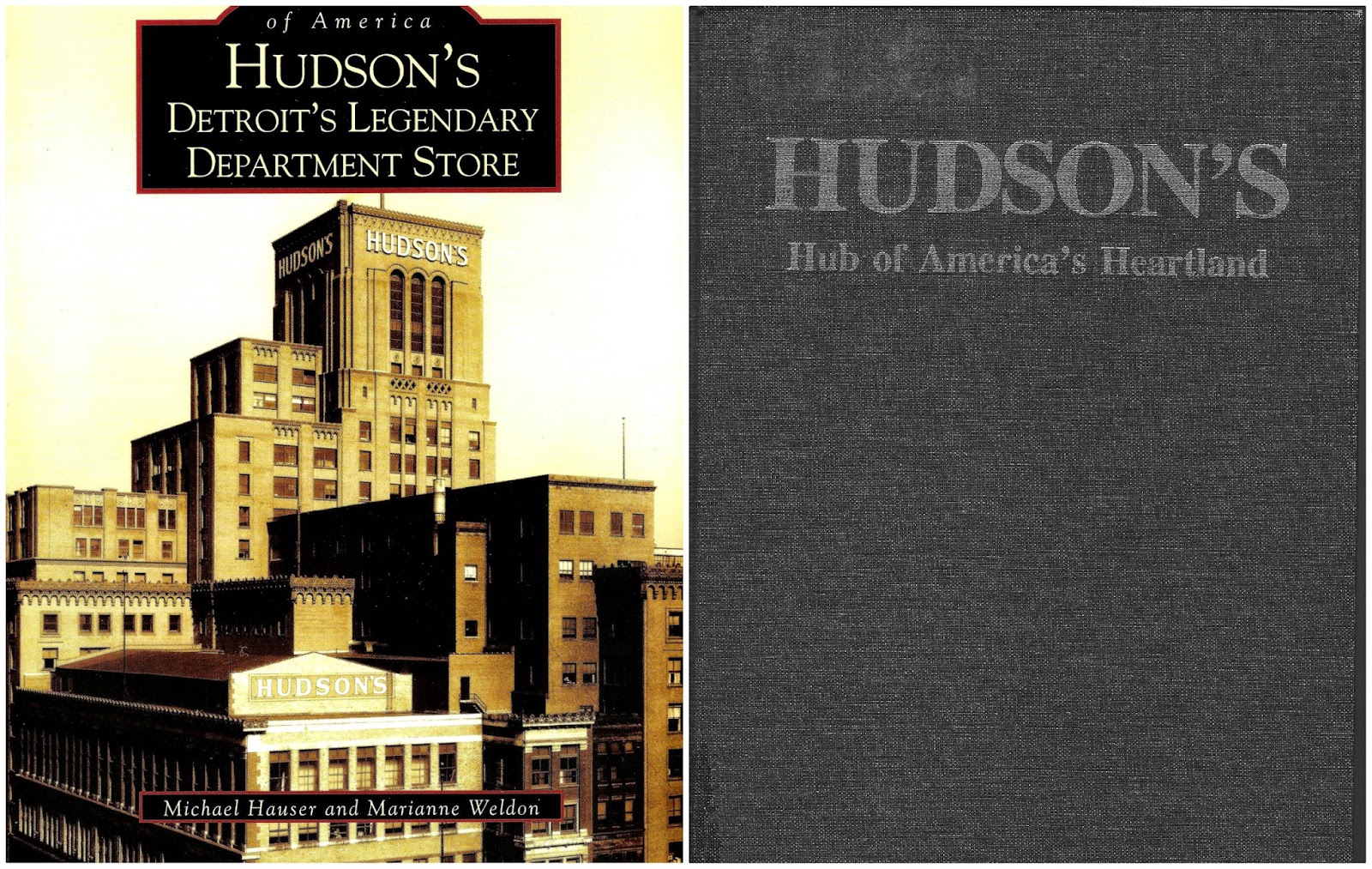 My car's packed with my display case, podium, tea urns, and dishware ready to take over to the house later today.

Since I've been doing a series of posts about my collections, I decided to share some of my Hudson's memorabilia today.  For the most part I've limited my collecting to things that would have been used in the Mezzanine Tea Room, 13th floor Dining Rooms, and the store's other eateries.  Then I broadened my collection to include what ladies would have worn when they dined at Hudson's.

Mike Hauser began my collection with silverware used at Hudson's tea room and restaurants. Everything except the long-handled teapot [top right] were duplicates in his collection. They all have Hudson's name engraved on them.  The teapot somehow strayed to Texas, but through E-bay I brought it back to Michigan! 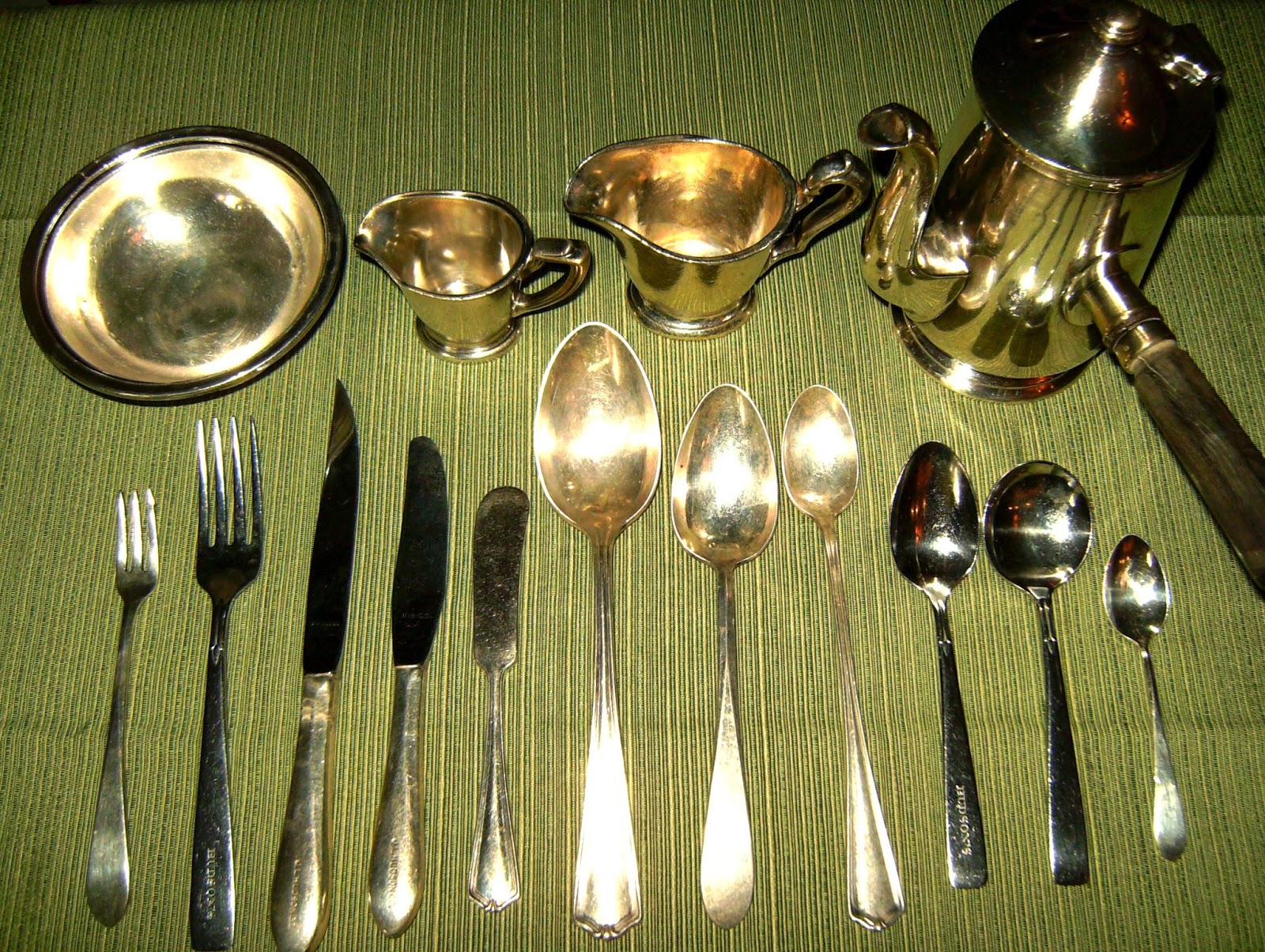 The 1947 Mezzanine Tea Room menu below was featured in Angela's Dainty Dining book. After it was published, she sent the menu to me.  I have since acquired two more - 1942 and 1952.  A pot of tea was .15 cents and a chicken salad sandwich was .35 cents!  Duncan Hines came to dine at Hudson's in 1947 and loved Hudson's Tea Room.  He declared their chicken pot pie was outstanding! 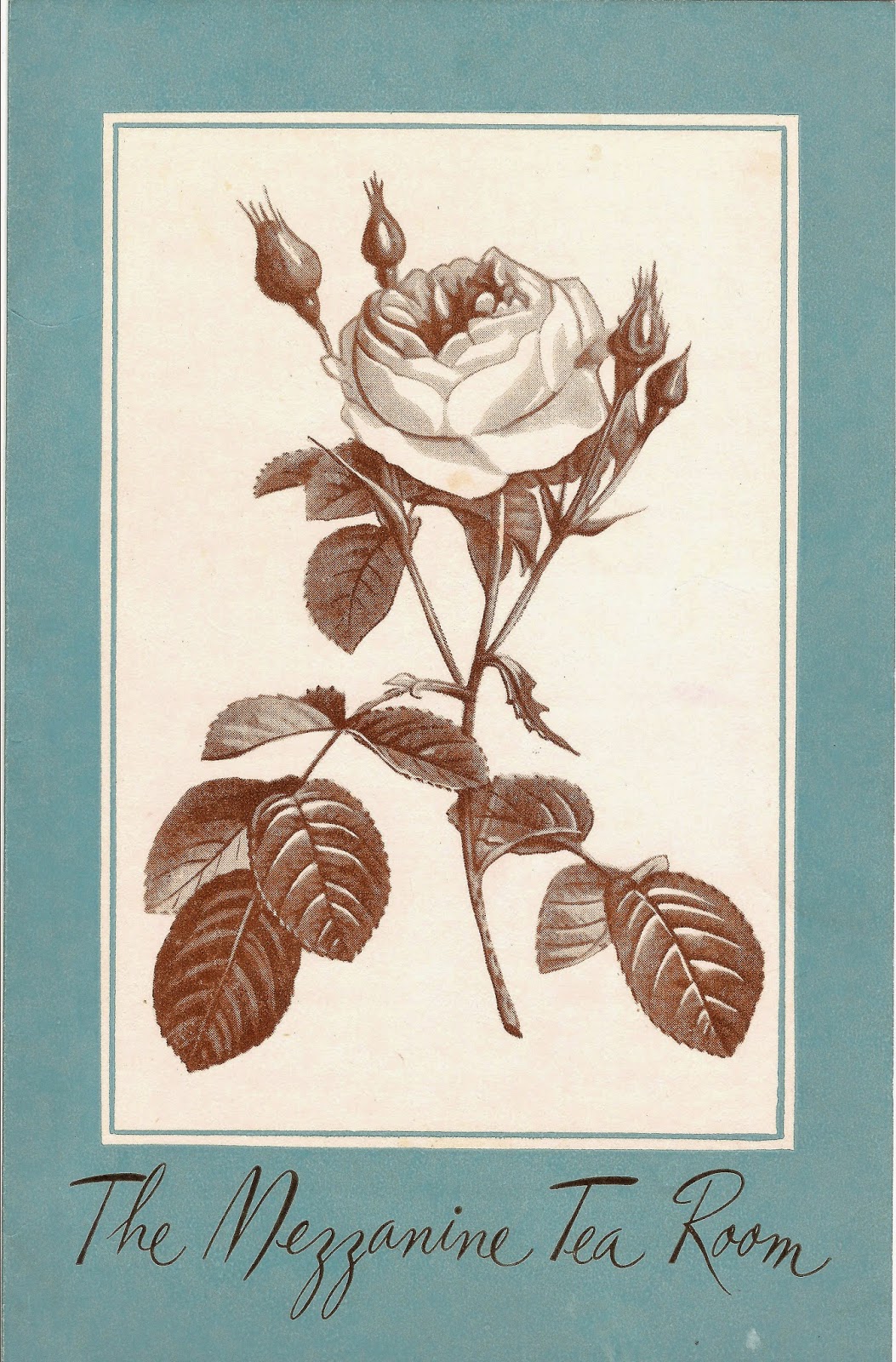 The basement store tea room transitioned to a cafeteria in 1947.  Diana Ross, lead singer of the Supremes was the first African-American employee to work in the cafeteria as a bus girl in 1962.

I have two menus from the 13th floor Georgian Room Restaurant.  The one pictured is dated 1929, and the other one isn't dated. 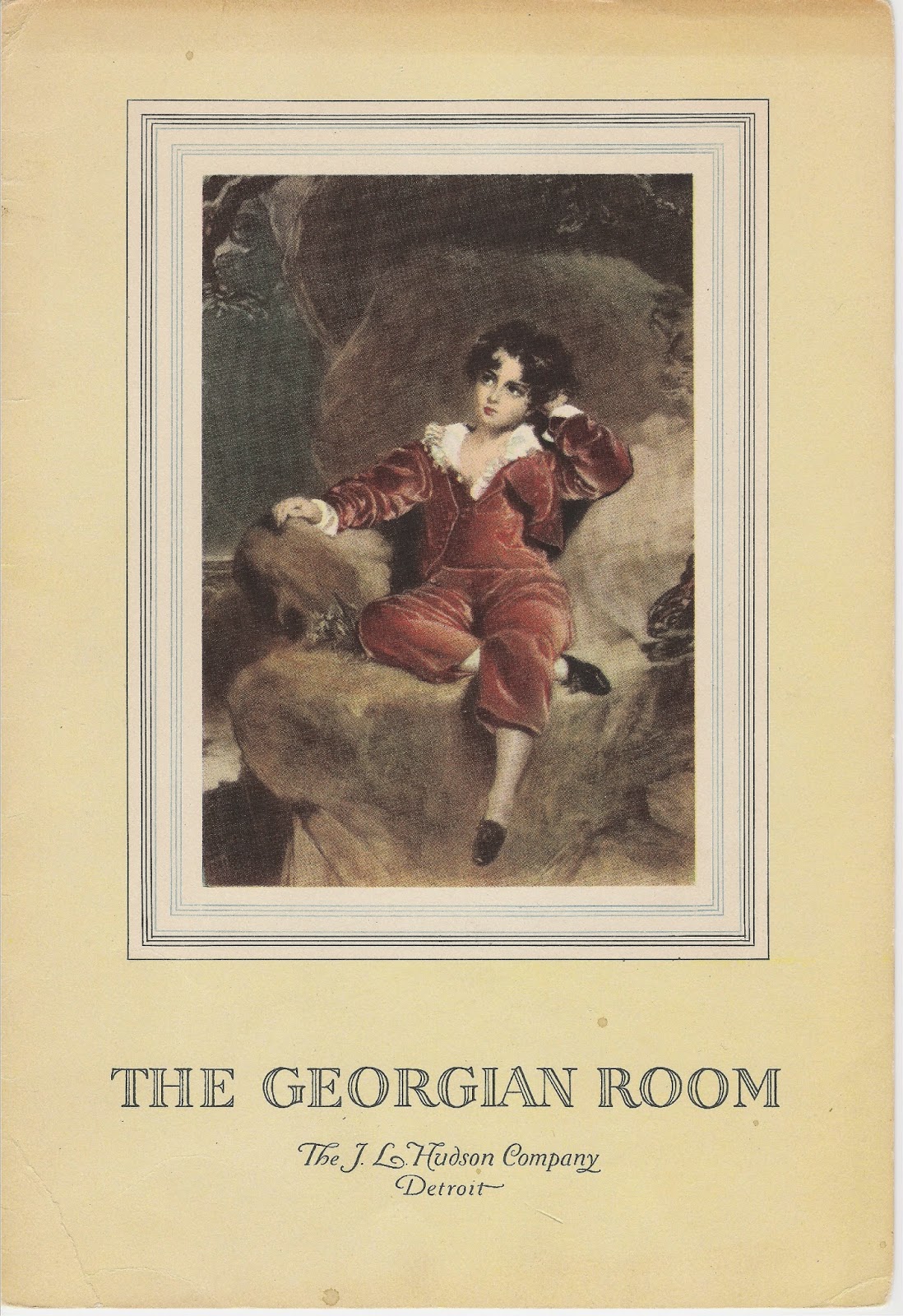 Below are menus from 1948 and 1953 used in the Georgian and Early American Dining Rooms. 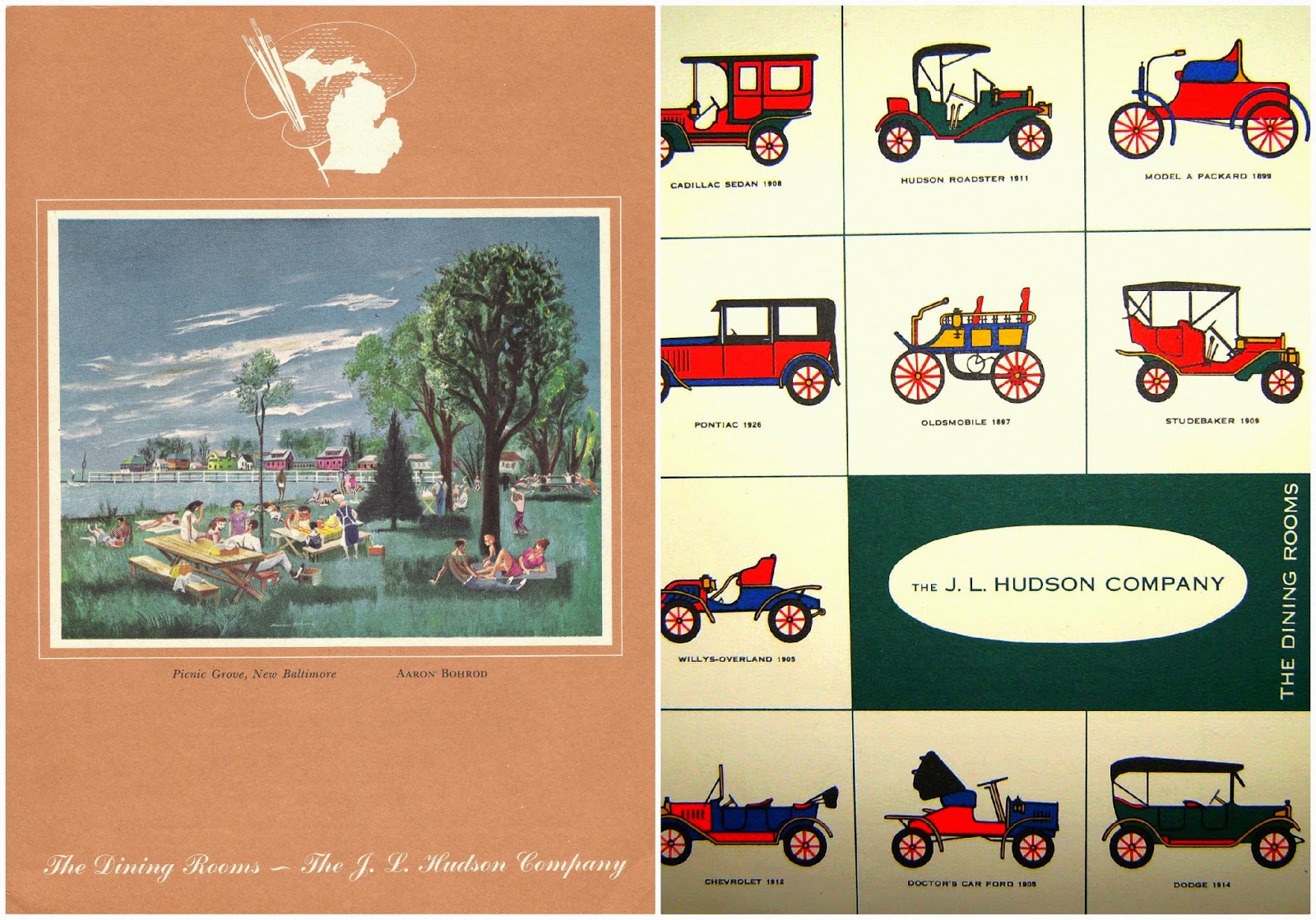 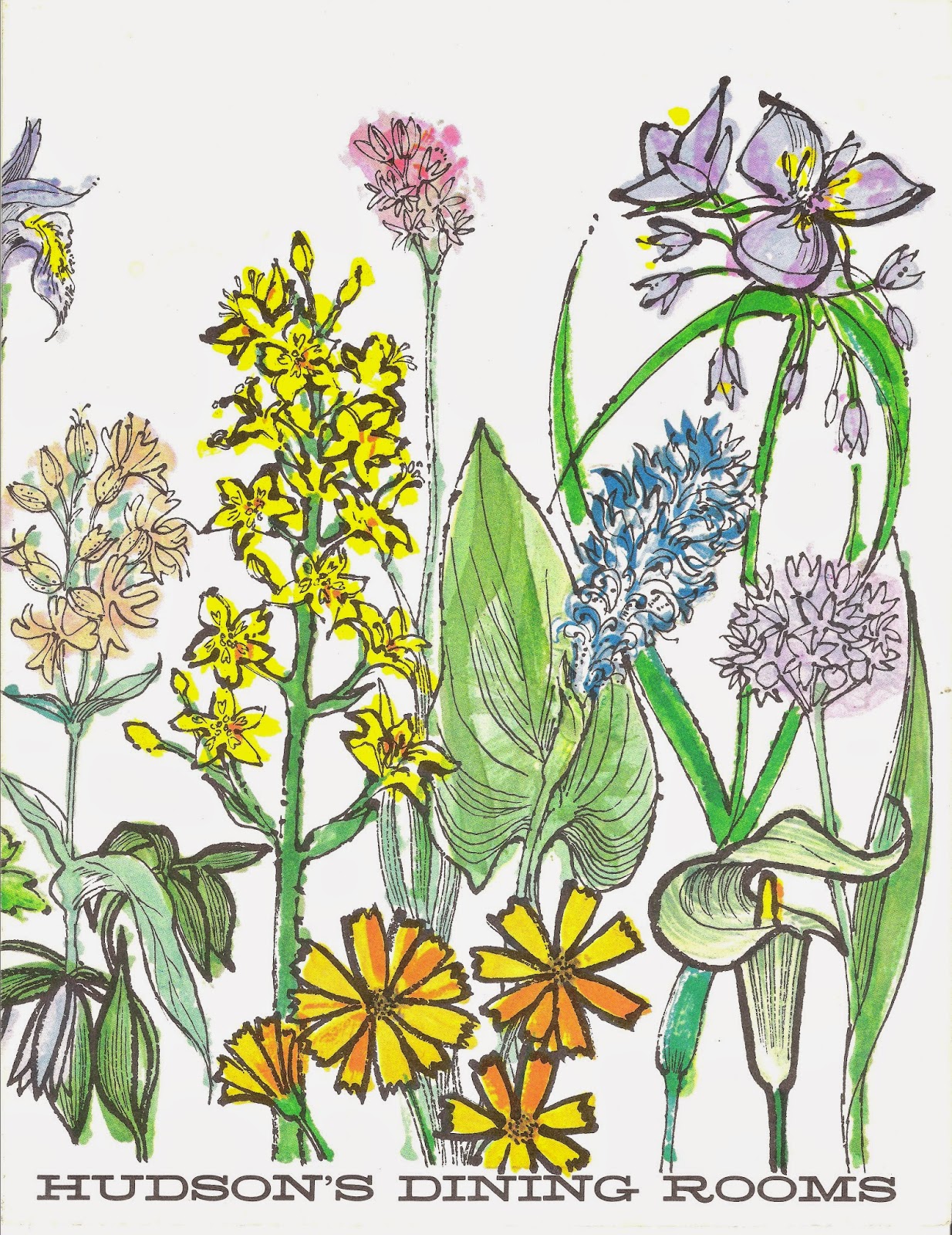 I've bought several dishes backstamped J.L. Hudson's because I was told they were used in the tea room or restaurants.  Then later I found out they were merchandise sold on the china floor, but they're still nice to have in my collection. 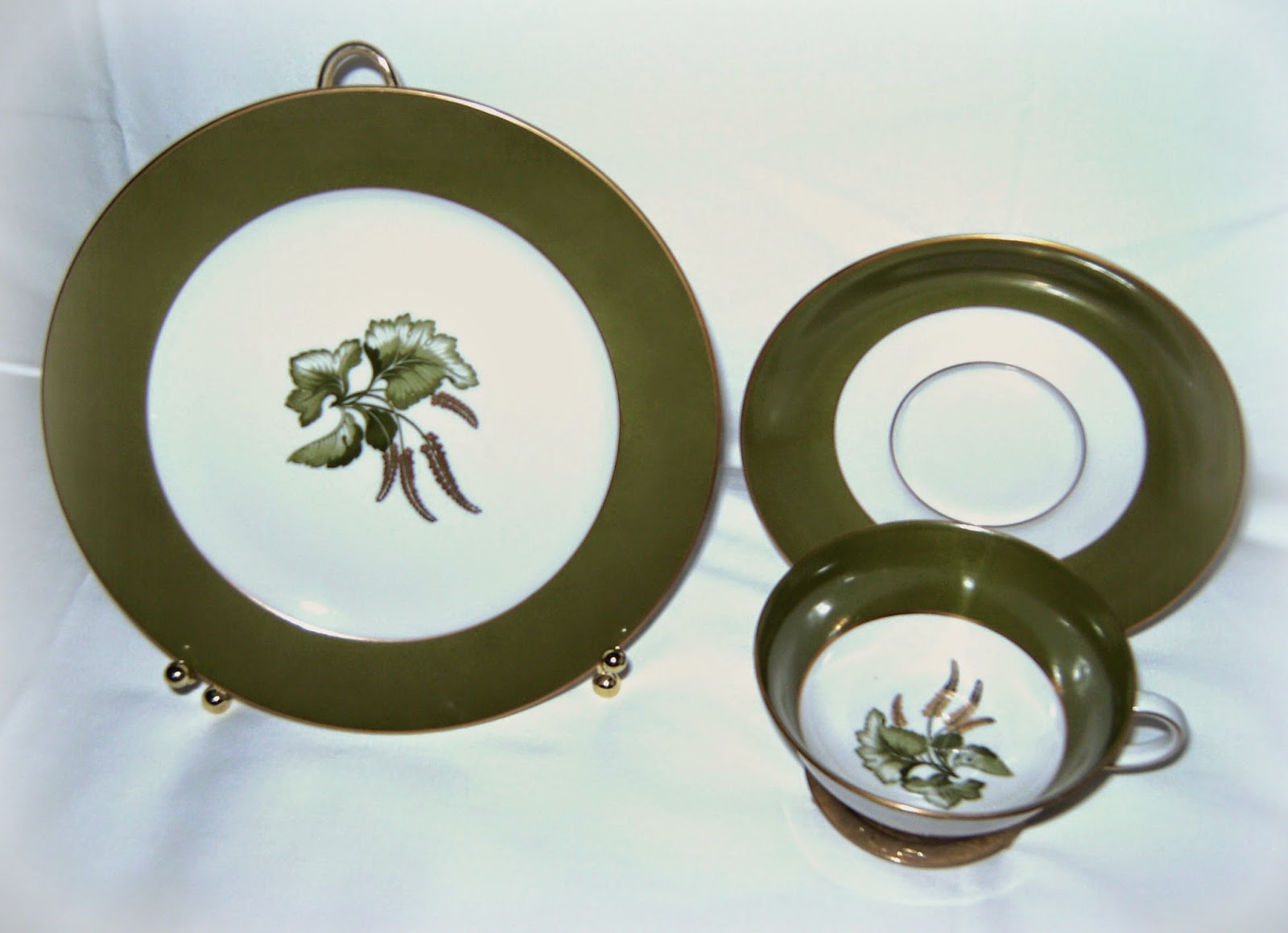 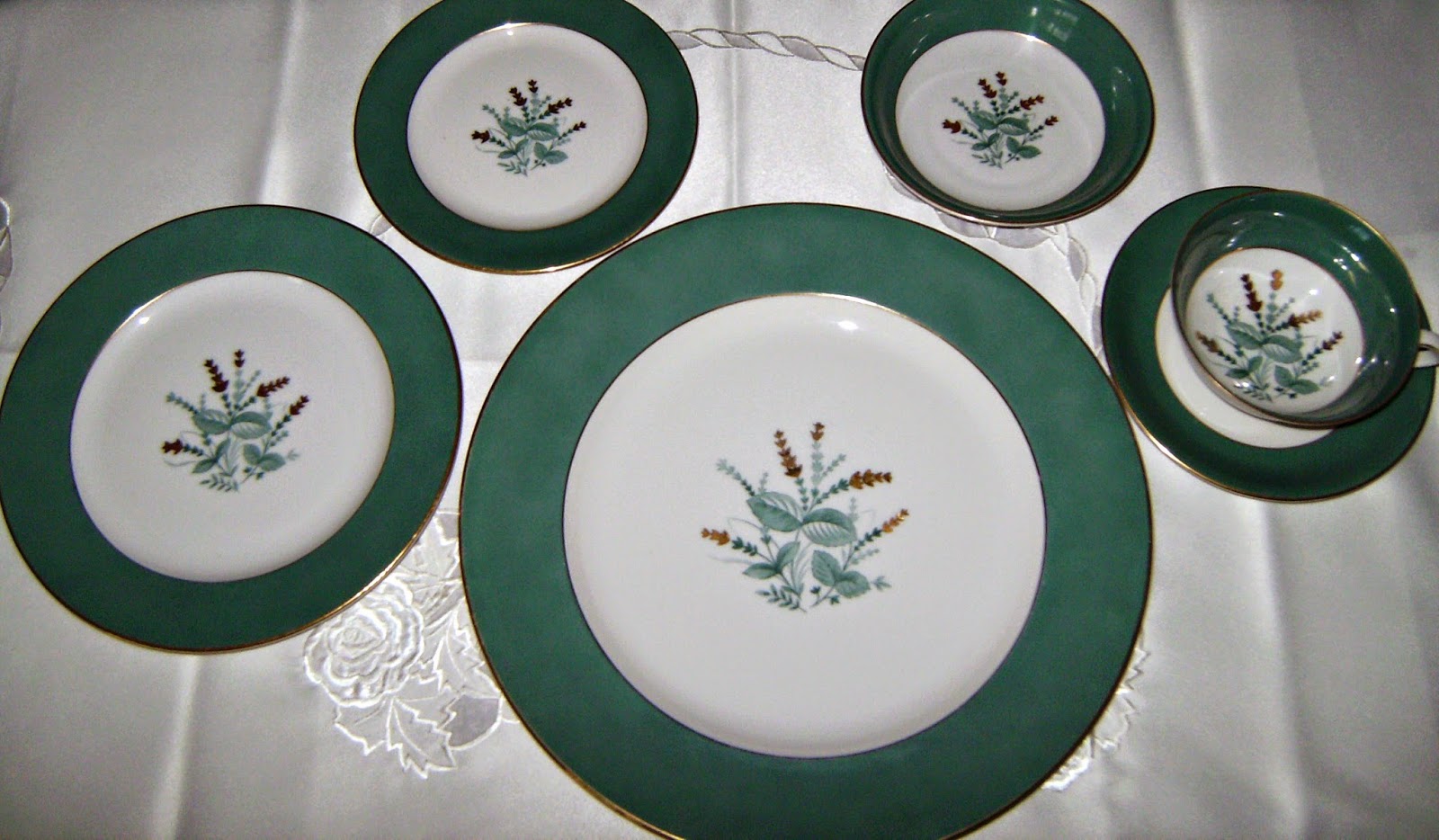 I got a great break last year, however, [thanks again to my friend, Angela] when I was able to purchase three Syracuse china platters on E-bay that truly were used in Hudson's dining rooms. Syracuse China featured the platters [Dorsett pattern] in their 1946 catalog, and the photo was taken in Hudson's 13th floor Early American Dining Room. It took a lot of research and patience to obtain a photocopy of the catalog page because Syracuse China sold to Libbey Glass in 1995. But persistence paid off, and I'm happy to now have it in my collection along with the platters. 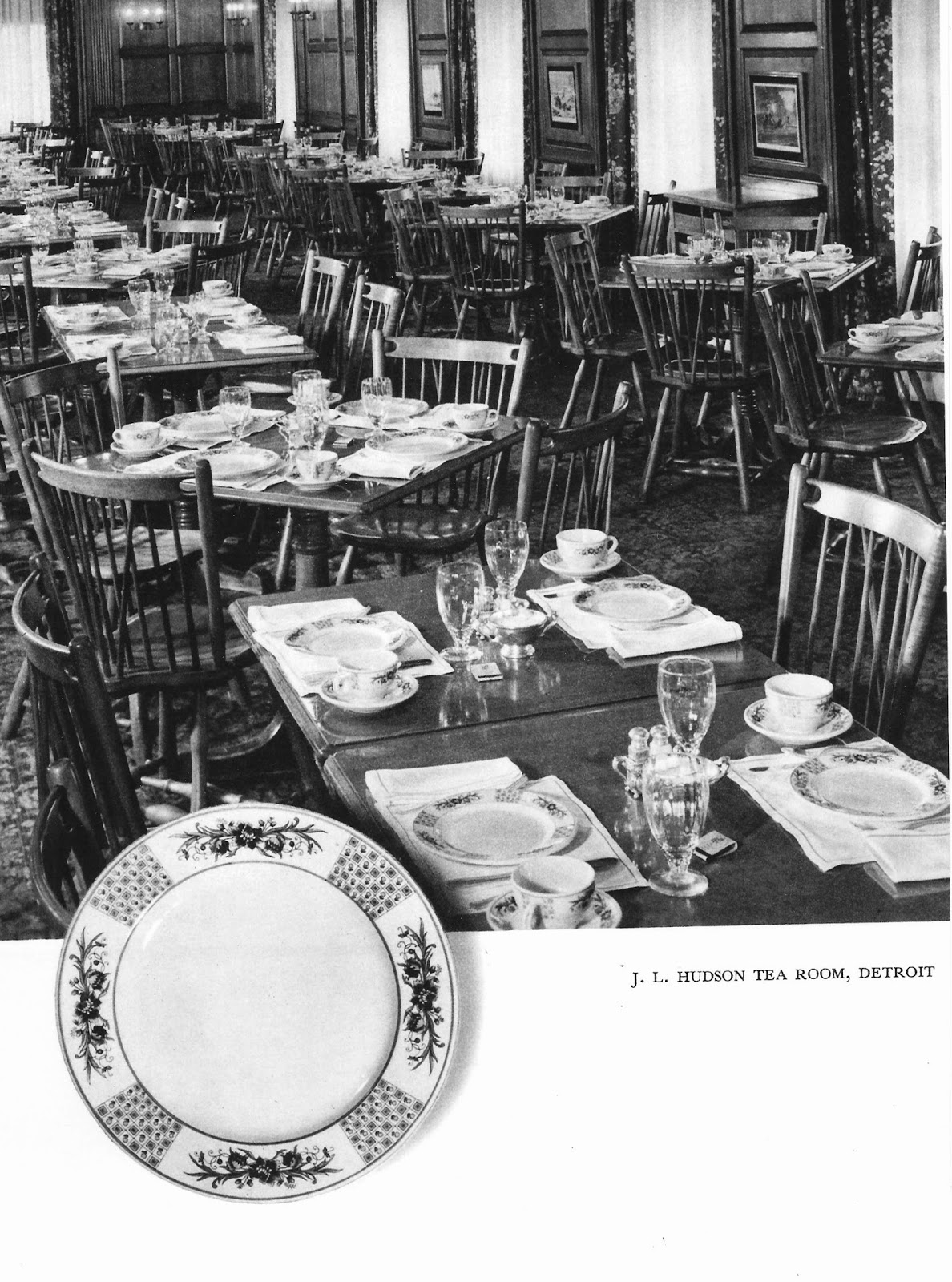 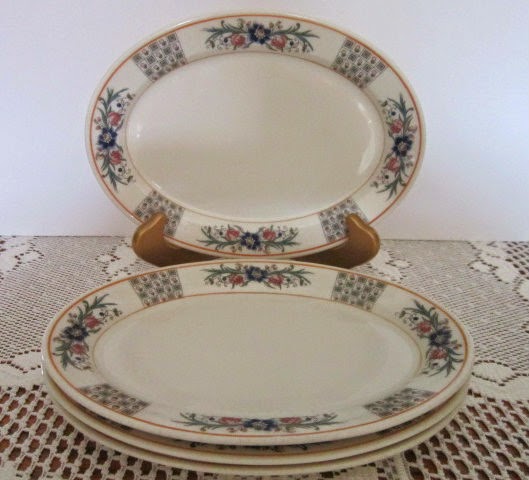 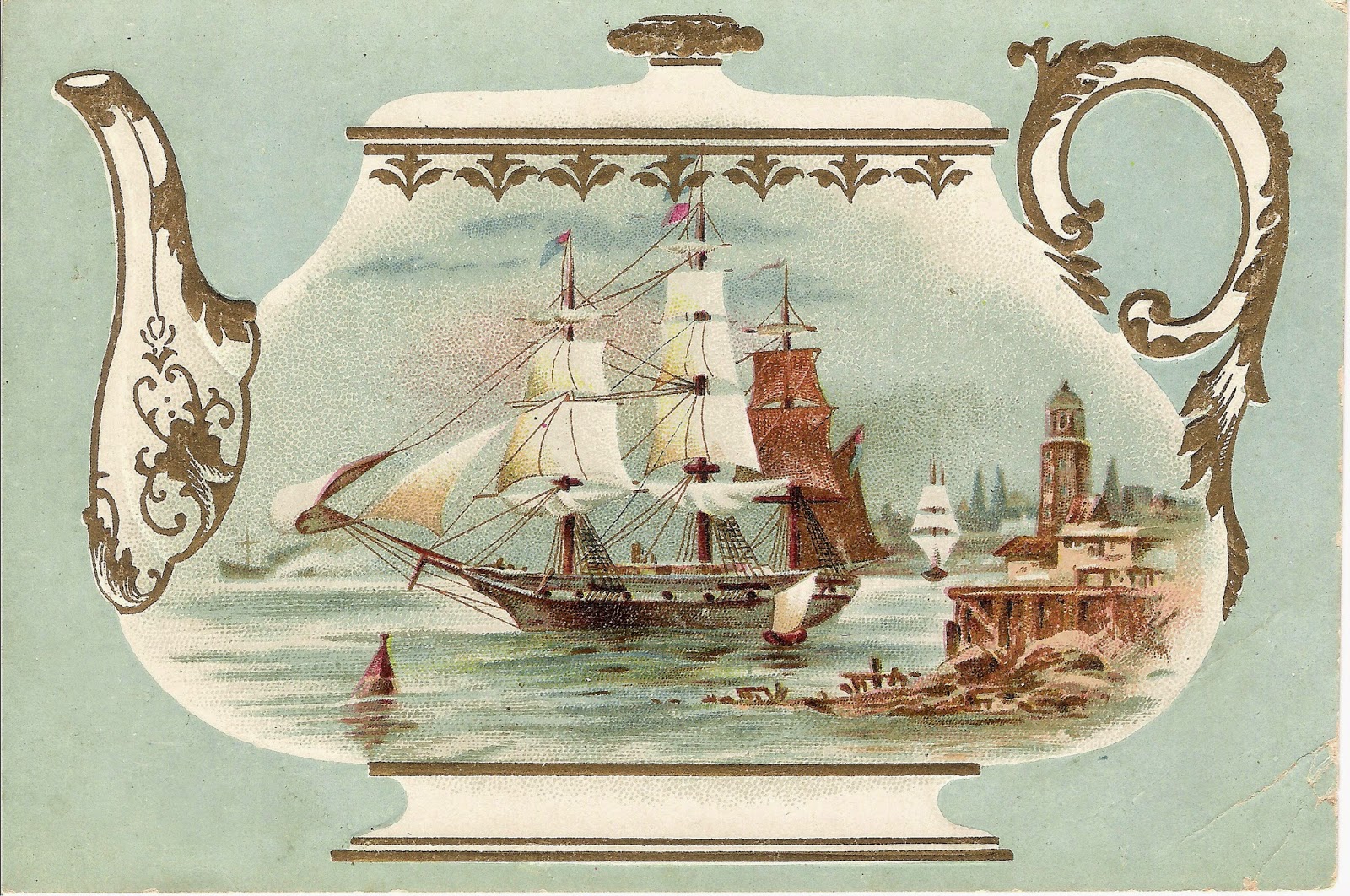 My hubby gave me the signed and numbered painting of Hudson's [below] for Christmas 2013.  It was painted by Jim Williams. 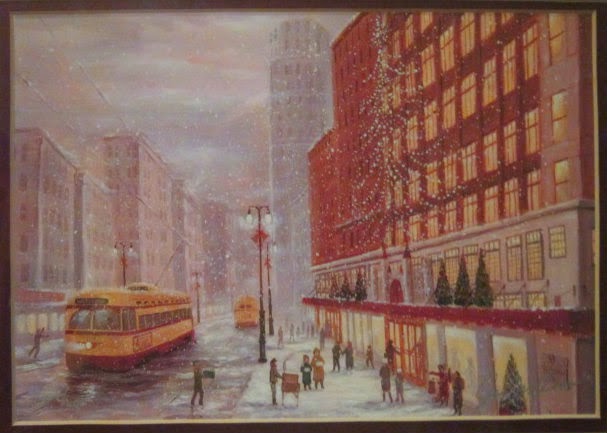 I was happy to obtain a 1929 copy of "The Minuteman" publication earlier this year, where the back cover was dedicated in large part to Hudson's restaurants. Below is the Detroit News/Free Press edition from the store's  implosion in 1998. What a sad day! Only in Detroit would such an iconic building and historic landmark be demolished.  In the 1960's the 25 story building was the second largest department store in the United States, with only Macy's main store in New York City surpassing it. 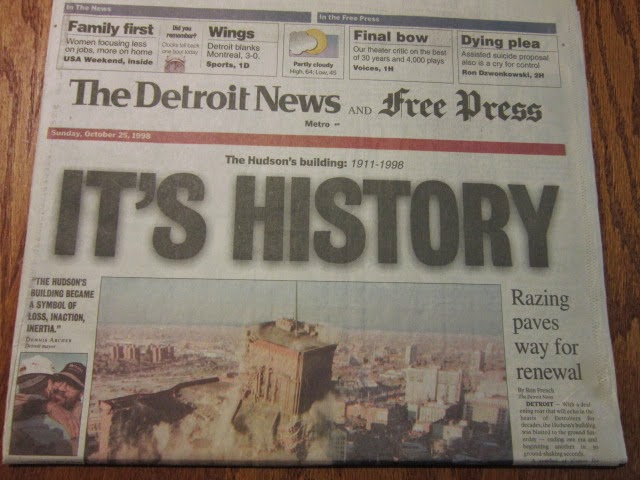 I have vintage postcards, store directories, 'Hudsonian' magazines [in-house employee publication], employee handbook, employee recognition pin, two Hudson's videos, Hudson shopping bags and boxes, and other memorabilia that I won't include in today's post, but I do want to share some of the items I've acquired that ladies would have worn when they dined at Hudson's.

This box of Hudson's hosiery had to come home with me when I discovered the color of the hose was "teatime." 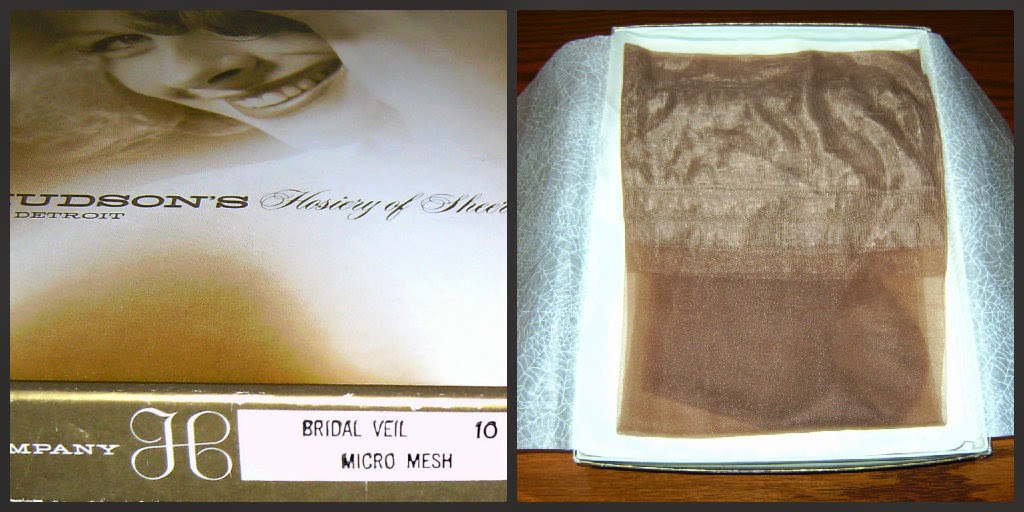 Two pair of brand new gloves from Hudson's with original price tags - the ecru lace gloves sold for $1 and the leather gloves $4.  I also have a strand of Hudson's pearls and a 1930's tapestry evening purse [not pictured]. 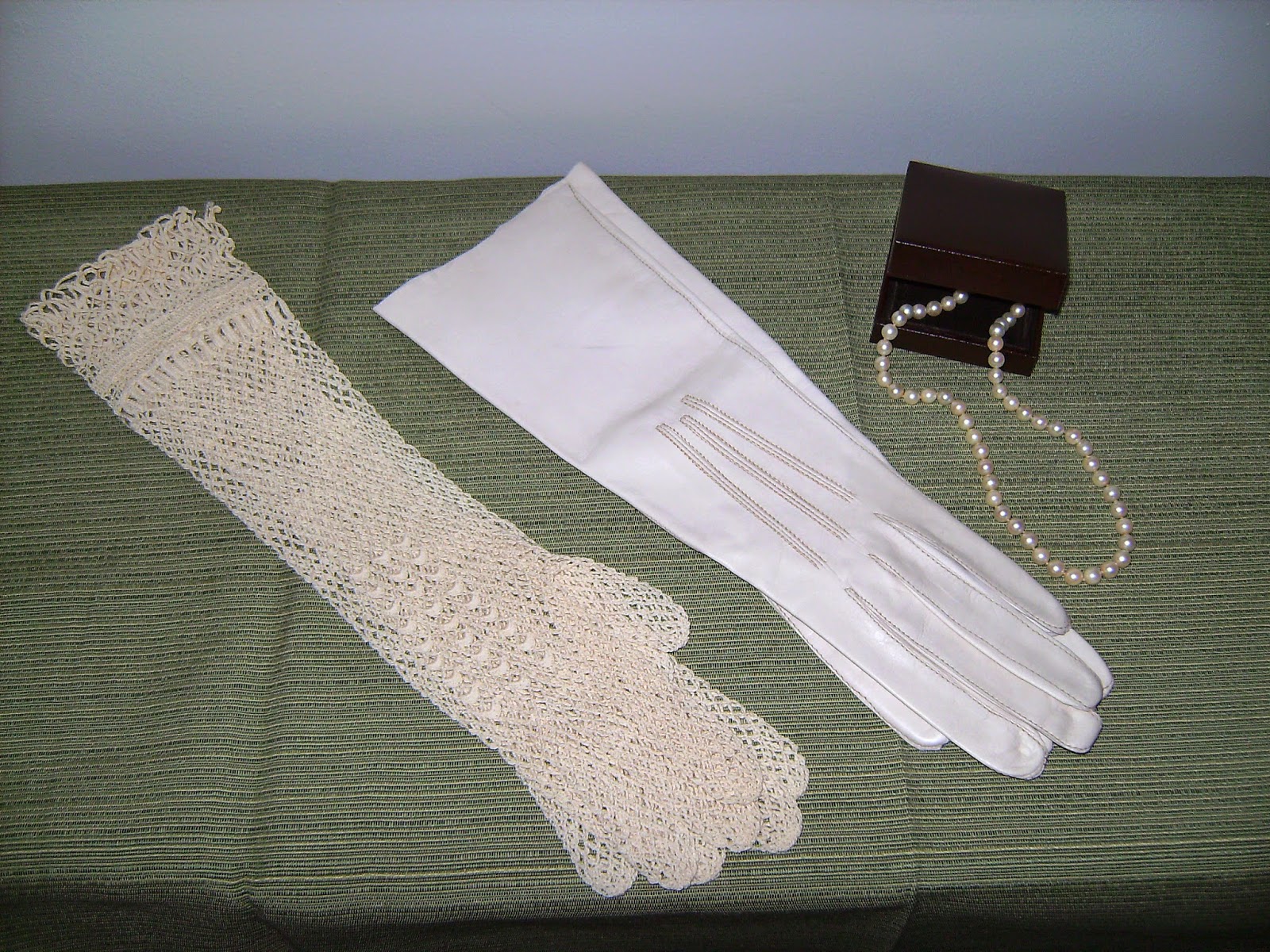 I love my hats from Hudson's.  Millinery was sold on the first and seventh floors. The turquoise hat has it's original price tag of $3.99 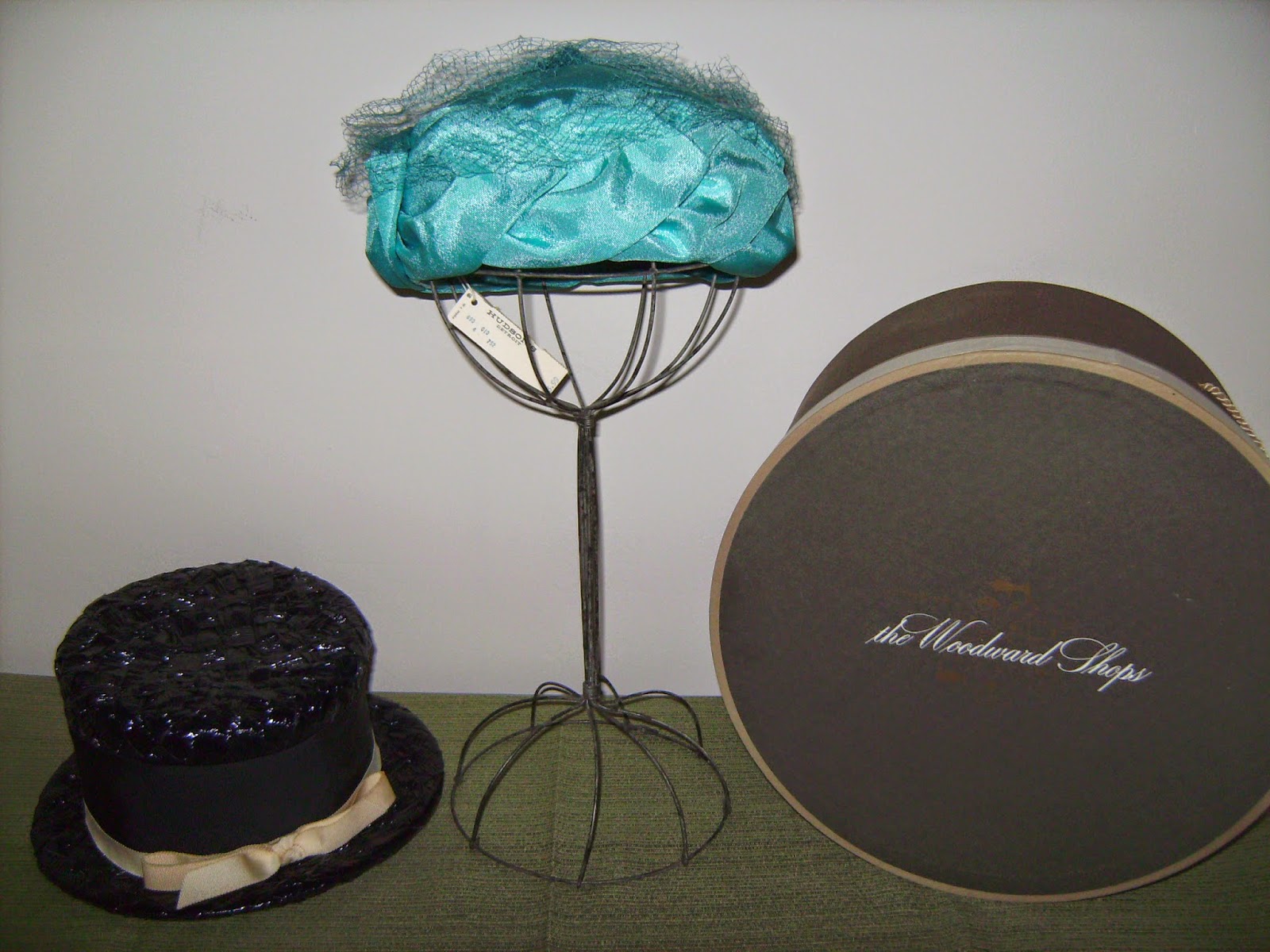 You will probably remember the large Hudson's hat box I purchased when KrisTea's went out of business last month. 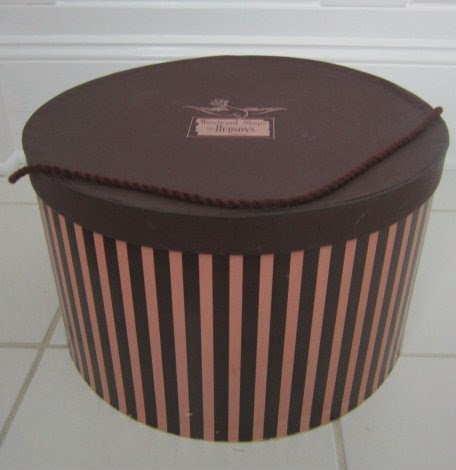 And the two hats I recently acquired at Tyme Well Spent tea room. 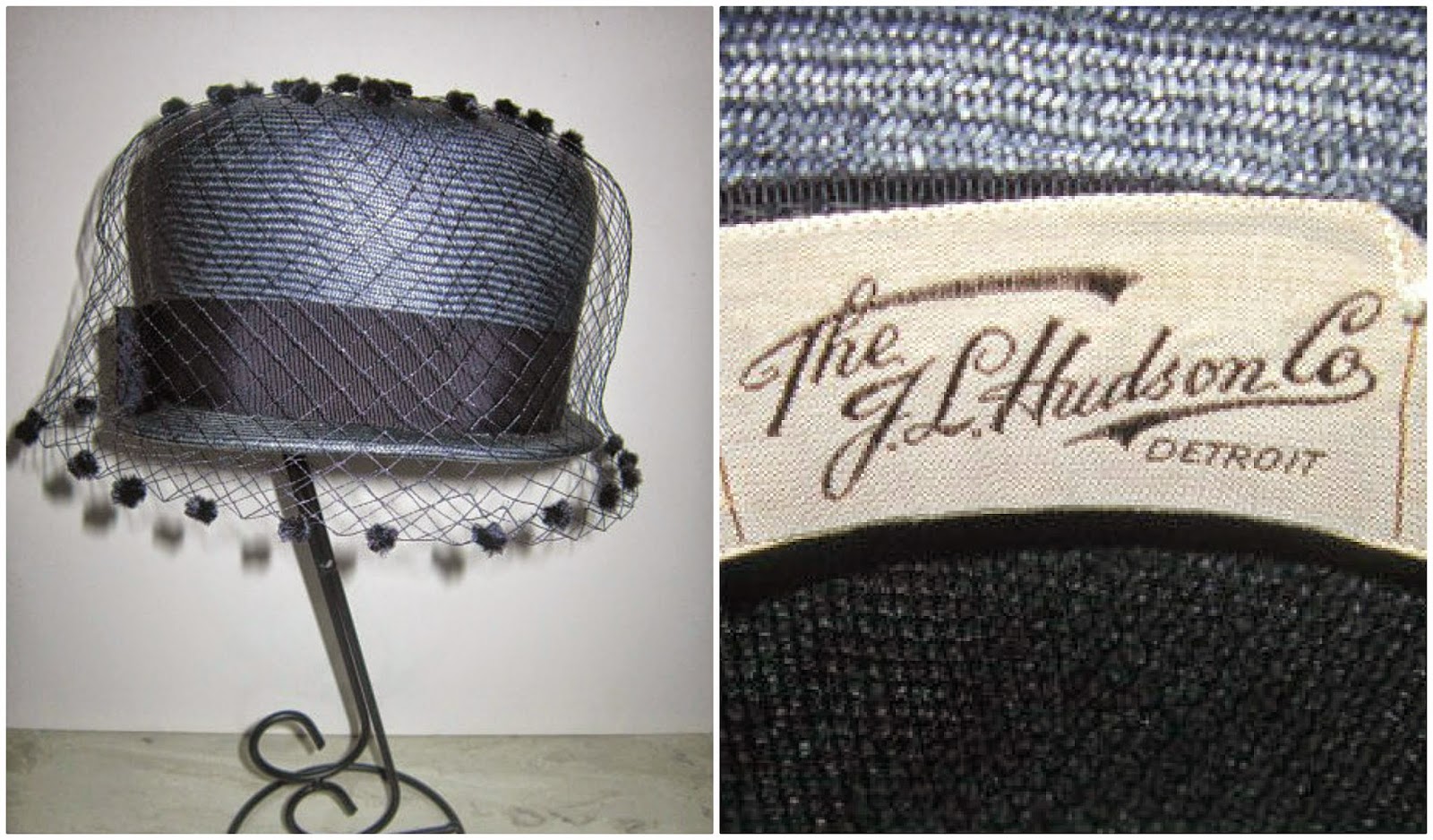 Lastly a fur cape from Hudson's. 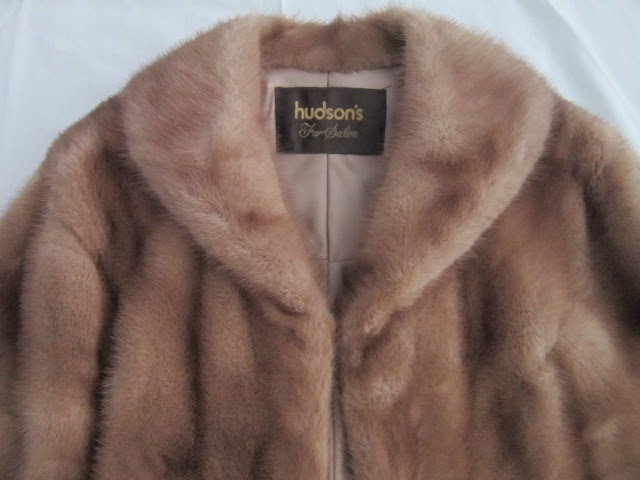 So now you have a sneak peek at most of the items in my collection that will be displayed at the former Hudson home this coming Sunday.  I'll be sure to tell you all about it next week, complete with photos.