I won't share all six Presidents who were in my Love Letters presentation last Sunday, but I do have one more before I close out the series - Theodore "T.R." Roosevelt, Jr.

Born into a family of wealth and status, T.R. was sick with asthma most of his childhood and was home schooled, but he was well-read, and well-traveled.  He read books on every conceivable subject, and sometimes read as many as three books a night.

When Roosevelt went to Harvard in 1876 his sweetheart was Edith Kermit Carow.  After a quarrel, however,  their courtship  ended.  At the age of 20 he met Alice Hathaway Lee at the home of her cousin, who was a Harvard classmate of T.R.'s.  It was love at first sight for T.R. Of their first encounter he wrote: "As long as I live, I shall never forget how sweetly she looked, and how prettily she greeted me." 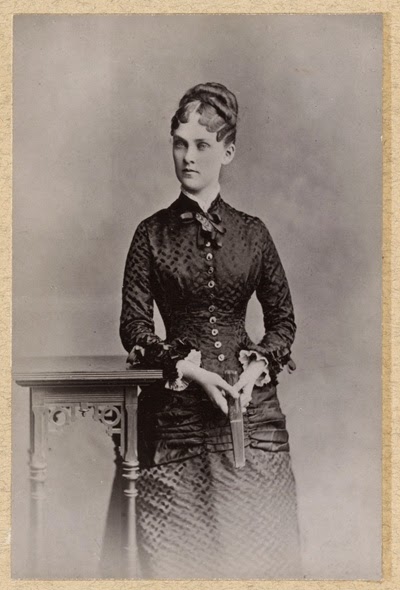 Eight months later he proposed to Alice.  She put him off, taking another eight months before saying yes.  T.R. showered her with gifts and attention.  In February 1880, an ecstatic Roosevelt recorded in his diary his great joy that the woman of his dreams, whom he had actively courted for more than a year had finally accepted his proposal of marriage. They announced their engagement on Valentines Day. 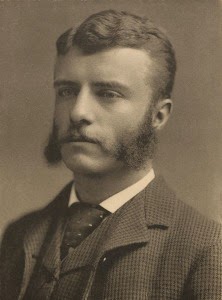 Almost two dozen letters reveal the passion and young love T.R. had for Alice.  In 1883 he wrote:  "Sweetest little wife, I think all the time of my little laughing, teasing beauty, and how pretty she is, and how she goes to sleep in my arms, and I could almost cry I love you so."

On February 12, 1884, Alice gave birth to a healthy baby girl named Alice Lee Roosevelt. Theodore was in Albany on business because the baby wasn't supposed to be born until Valentine's Day. When he received a telegram of Alice's birth, he made arrangements to return home.  But a second telegram arrived informing him that Alice [his wife] had taken ill. By the time he got home she was in a semi-comatose state.  He held her for two hours until he was told his mother's health was deteriorating two floors below in the Roosevelt's Manhattan home.  His mother died around 3:00 a.m. on February 14th, 1884 from typhoid fever.

Theodore rushed back upstairs to his wife, and held for several hours until she passed that same afternoon from Bright's disease [kidney failure].  For that date in his diary he made a large X and simply wrote:  "The light has gone out of my life."  Alice was just 23 years old.

T.R. was distraught by Alice's death.  In a tribute he wrote: "She was beautiful in face and form, and livelier still in spirit; as a flower she grew, and as a fair beautiful young flower she died.  Her life had been always in sunshine; there had never come to her a single sorrow; and none ever knew her who did not love and revere her for the bright, sunny temperament, and her saintly unselfishness.  Fair, pure, and joyous as a maiden; loving tender, and happy. As a young wife; when she had just become a mother, when her life seemed to be just begun, and when the years seemed so bright before her - then, by a strange and terrible fate, death came to her.  And when my heart's dearest died, the light went from my life forever."

Alice was buried in Green-Wood Cemetery in Brooklyn, New York, next to her mother-in-law, after a double funeral.

So final was T.R.'s decision to try to put Alice's loss out of his life, that she is not even mentioned by name when he wrote his autobiography at age 55.  One author said it was as though it would unlock pent-up sorrow.

After Alice's death, T.R. turned the care of his newly-born daughter over to his sister, Bamie, and left for a period of self-recovery at his ranch in the Dakota Territory.

When he returned, he met Edith Carow in the fall of 1885 at his sister Anna's house, and they rekindled their love again.  They married in December 1886, and took custody of young Alice, and had five children of their own.

T.R. was nominated by the GOP to serve as Vice President under William McKinley. McKinley won the election but was assassinated on September 14, 1901, and Theodore Roosevelt became the 26th President of the United States.

Since this is a tea blog, I had to search until I found some tea association between T.R. and Alice, and I found two references from his diary.  When they were courting T.R. mentions taking her to tea at the Morgan's [no reference as to who they are].  And three days after their wedding he wrote: We ate breakfast at 10:00 , dined at 2:00, and had tea at 7:00. 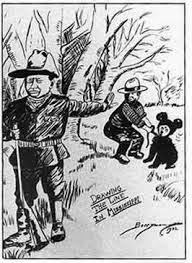 Regarding the teddy bear... In 1902 T.R. went on a bear hunt in Mississippi, but the only bear that was sited by the hunting dogs was a small black cub.  Roosevelt refused to shoot the cub. After hearing the story, a cartoon of the incident appeared in the Washington Post. Two days later a Brooklyn toy maker placed a copy of the cartoon in his window next to a stuffed brown bear, which he called "Teddy's Bear."  The name stuck and was later shortened to "teddy bear."