A Tea for Seniors

I arrived at Shore Pointe Village assisted living facility shortly before the senior's 2:00 o'clock tea party.  The tea follows their Sunday dinner, so it's very informal consisting of only a scone and tea bag of their choice. It occurred to me yesterday that I should ask the activities director if I can give a formal tea some Sunday.  We'll see where that idea goes, but in the meantime the ladies are content with an informal tea.  The table was set and waiting for them to arrive. 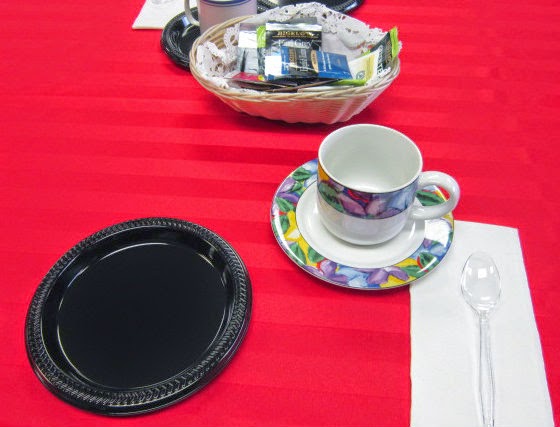 As mentioned in last week's post of 2/18, my program was about presidential love letters. I thoroughly enjoyed my research for this program, and learned a lot.  It was no surprise that Ronald Reagan wrote many love letters to his wife, Nancy, since he was such an eloquent man, and their close relationship was publicized.

I was surprised, however, to discover that feisty, no non-sense, "Give 'Em Hell" Harry Truman wrote many love letters to his wife, Bess - enough to fill a book! 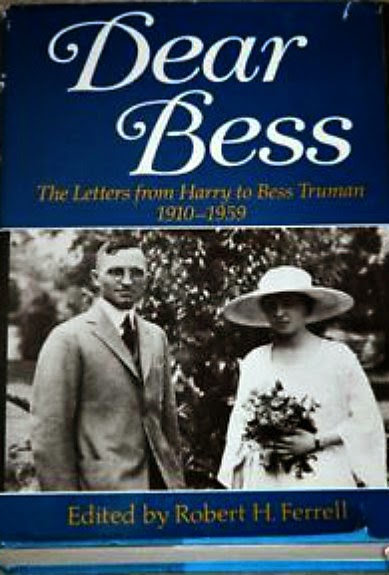 Harry S. Truman was the 33rd President of the United States from 1945-1953.  Since he was the president when I was born, I particularly enjoyed learning about him, and his love story with Bess. I thought you might enjoy it too.

Mr. Truman was born in Lamar, Missouri, but grew up in Independence, Missouri. Bess, officially named Elizabeth Virginia Wallace, was from Independence too.

Harry first saw Bess in Sunday school in 1890 when he was six years old and she was five. He said he fell in love with her right then and there and never changed his mind.  He never went on a date with or showed interest in any other woman.  Years later he was quoted as saying, "I saw a beautiful curly haired girl there [Sunday school].  I thought [and still think] she was the most beautiful girl I ever saw.  She had tanned skin, blond hair - golden as sunshine - and the most beautiful blue eyes I've ever seen or ever will see."

He went to school with her from the fifth grade on, with Bess seated right behind him [alphabetical order], but Harry said, "I was too backward to even look at her very much, and I didn't speak to her for five years."

Bess never noticed him.  Even in high school, when he did make efforts to win her favor, she remained uninterested.  Harry said, "If I succeeded in carrying her books to school or back home for her I had a big day."

After graduation from high school in 1901 Harry had to go to work to support his struggling farming family.  [Harry is listed as one of the poorest U.S. Presidents.]  He rarely saw Bess for almost ten years.  Then one day in 1910, he walked across the street from his cousin's house to Bess's house to return a cake plate to her mother.  Bess opened the door, and that's how their courtship finally began.

He started writing her letters and visiting her on weekends.  In June 1911 he proposed to her in a letter.  She didn't answer him for almost three weeks, and when she finally did, she refused him. He kept writing and coming to see her, though, and just over two years later, in November 1913, he proposed again, in person this time, and she accepted.

When he got home, he wrote her a letter saying:  "It doesn't seem real that you should care for me. I have always hoped you would but some way feared very much you wouldn't.  You know, I've always thought that the best man in the world is hardly good enough for any woman.  But when it comes to the best girl in all the universe caring for an ordinary gink like me - well, you'll have to let me get used to it... I've always said I'd have you or no one and that's what I meant to do... I'm all puffed up and hilarious and happy and anything else that happens to a fellow when he finds his lady love thinks more of him than the rest of the beasts."

The couple had to put their wedding plans on hold for five and a half years before they could marry. Harry wanted to earn some money first, then World War I came along and he went off to fight in France.  Of that time Harry wrote:  "I'll never forget how my love cried on my shoulder when I told her I was going.  That was worth a life time on this earth."

Bess gave Harry a photograph of her when he left for war.  He carried it in his breast pocket the whole time he was in France, and looked at it every possible chance he got.  Years later, he kept it on his desk in his Truman Library office, where it remains today. 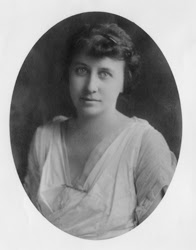 Captain Harry Truman returned from war safely, and the couple were finally married on June 28, 1919 at 4:00 o'clock in the afternoon at Trinity Episcopal Church.  He was 35 and she was 34. 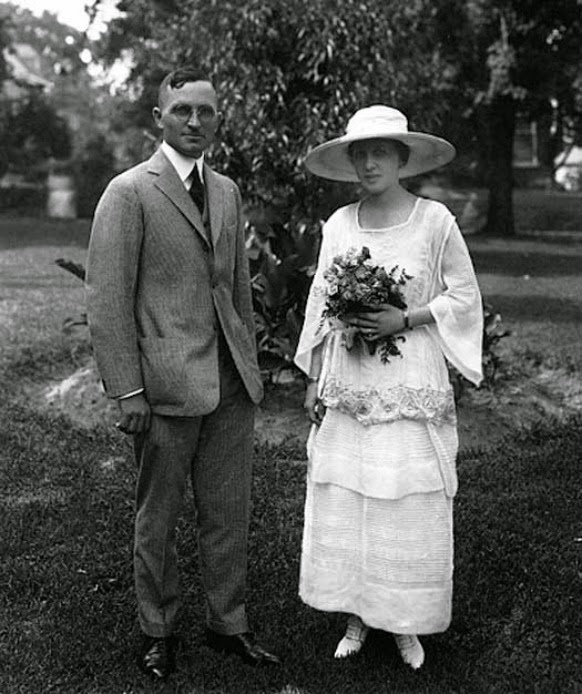 They were married for 53 years.  On their 29th anniversary when Harry was in Washington, and Bess was in Independence, he wrote her saying, "You still are on the pedestal where I placed you that day in Sunday school in 1890.  What an old fool I am." 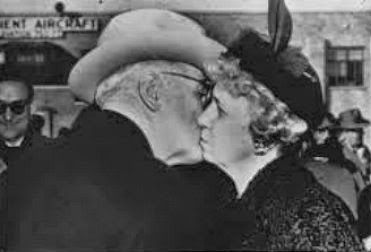 A few more tidbits you might enjoy knowing...  Harry had to wear thick glasses during his childhood and because they were expensive [and his family was poor], his mother wouldn't allow him to play contact sports.  He was teased for taking piano lessons instead, but he became an accomplished pianist.  'Music' was said to be his middle name. 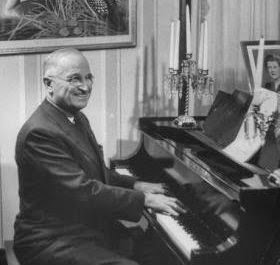 Bess was a very private first lady telling the press, "You don't need to know me.  I'm only the president's wife and the mother of his daughter."

She was, however, very hospitable.  Records at the White House Social Office reveal Bess averaged hosting more than one tea a week with numerous women's groups.  One month she hosted sixteen teas. The President often came to these teas unannounced, and sometimes even played the piano for the guests.

By the late 1940's the walls of the White House were crumbling, and many wanted to demolish it and build a new one.  Mrs. Truman disagreed and felt the original walls should be maintained inside a new steel structure.  She openly lobbied congressional leaders and made a rare public statement urging the preservation of the White House.  Her efforts prevailed, and Congress appropriated funds to renovate the White House.

After its renovation Bess held a series of teas so government officials could see the refurbished mansion.  To complete the restoration the Trumans ordered new official Lenox White House china in 1951. 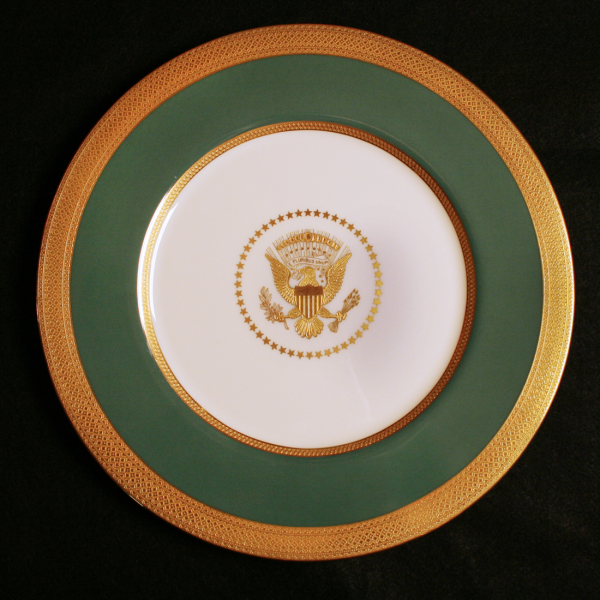 Harry coined the phrases:  "If you can't stand the heat, get out of the kitchen."  "The buck stops here", and "It's a recession when your neighbor loses his job; it's a depression when you lose yours."

They had one daughter, Margaret, who Bess gave birth to when she was 39 years old after two miscarriages.  The three were a very close family.

Posted by relevanttealeaf at 12:15 PM