Today I returned to Meadow Brook Hall [home of Alfred and Matilda Dodge Wilson] for their 2015 Downton Days.  You may remember me blogging about Downton Days last year, when I almost missed out because reservations sold out quickly. Fortunately they added a second group and I was able to attend. I took great care not to let that happen again this year by watching their website closely. I called the morning reservations became available [January 8th]. Programs Coordinator, Elizabeth Eberlein, said I was the first caller.  No snoozing or loosing for me! ;-) 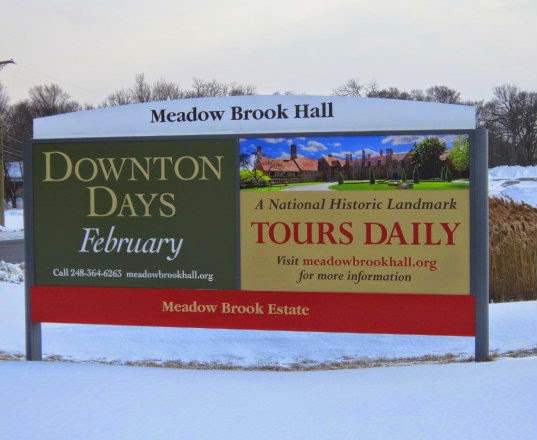 In spite of the cold weather my girlfriends and I headed to Rochester, MI where Meadow Brook Hall is located.  The tea began at 1:00 p.m. in the Christopher Wren Dining Room, followed by a tour of the mansion. 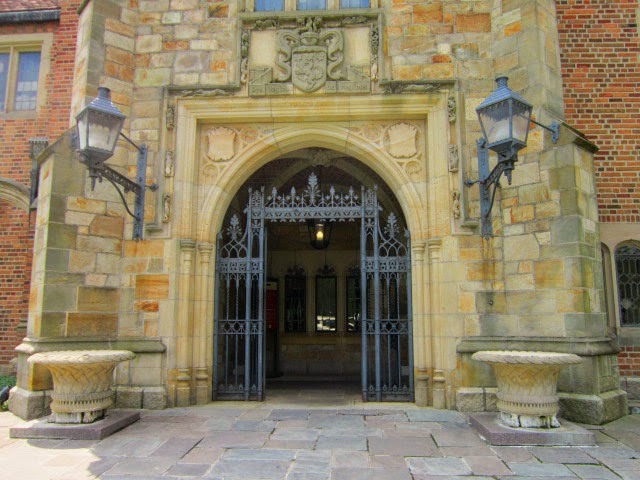 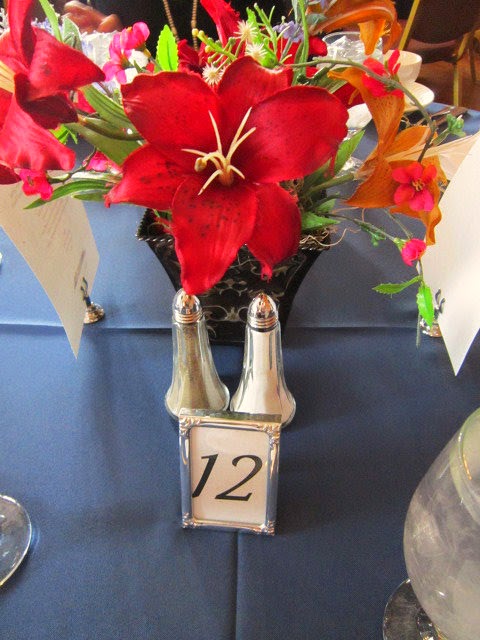 Three delightful ladies were at our table. L-R: Janice, Barbara and Jeanette. It was Barbara's birthday.   Janice belongs to Questers and is also a docent at Meadow Brook.  Love her red hat!  I always say, "You meet the nicest people over tea!" 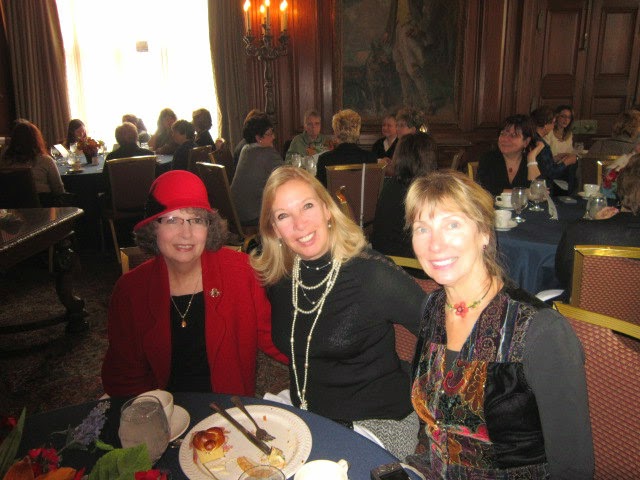 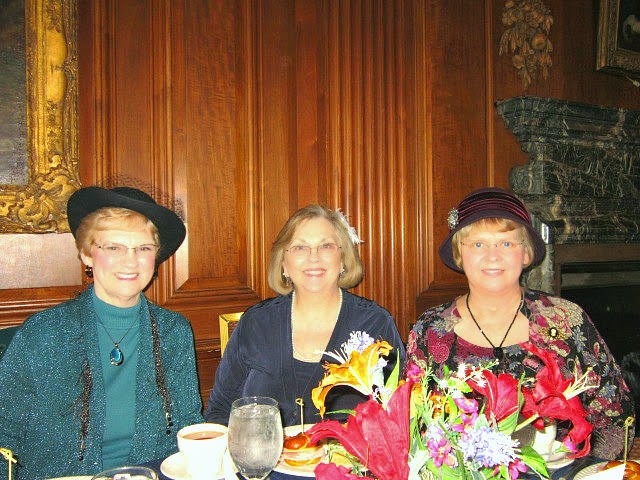 I was delighted to see two young ladies at the tea who read my blog, and were at the fund raiser tea at J.L. Hudson's former home on Sunday.  Amy is pictured below. Below is Amy's friend, Kim.  It always makes me happy to see young ladies who enjoy tea and will keep the tradition alive. 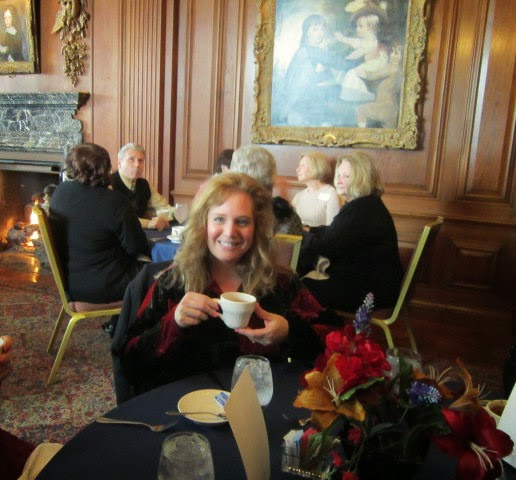 ~ Patricia was our server  ~ 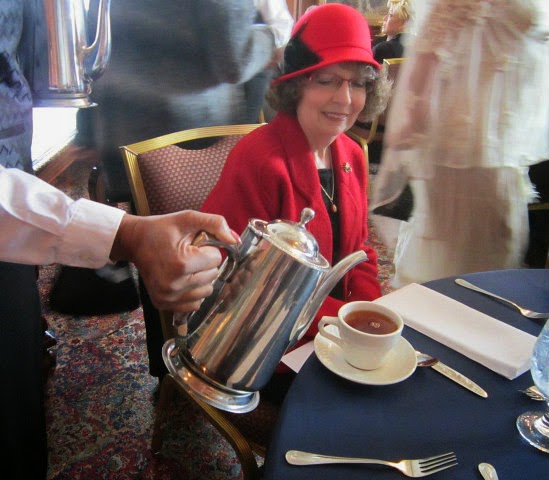 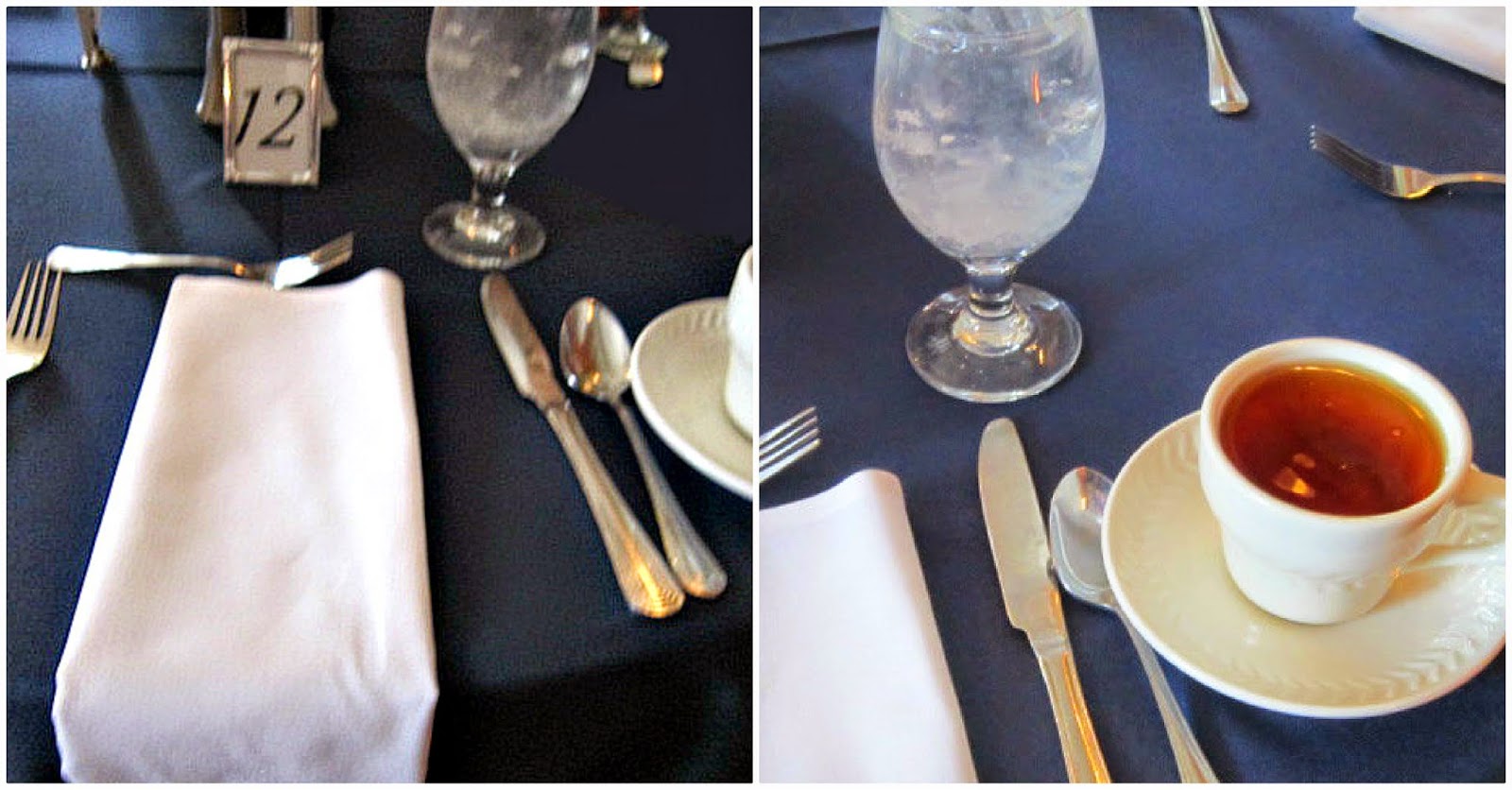 ~ The dining room was filled with many ladies, and a few gentlemen. ~ 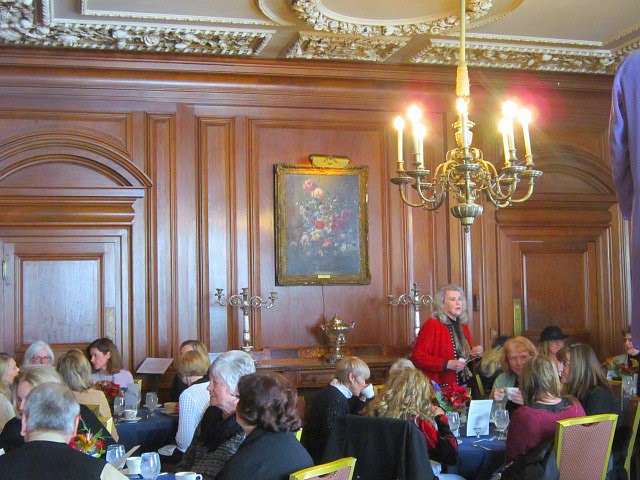 Below is Matilda Dodge Wilson's silver service in the center, and in the lower right corner is a cup and saucer from her Royal Aynsley set which was displayed in the second floor Great Hall. 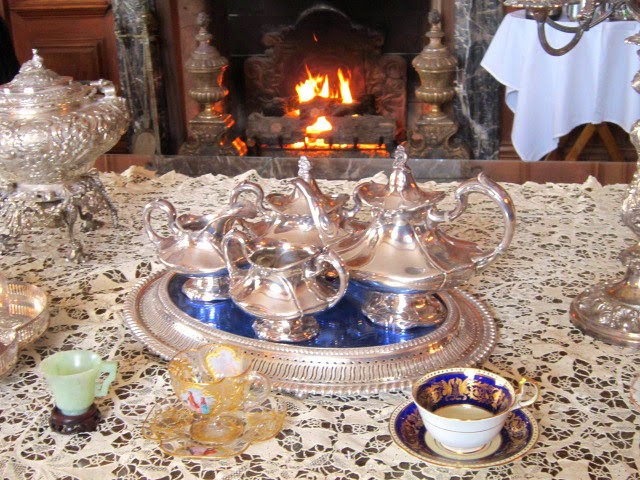 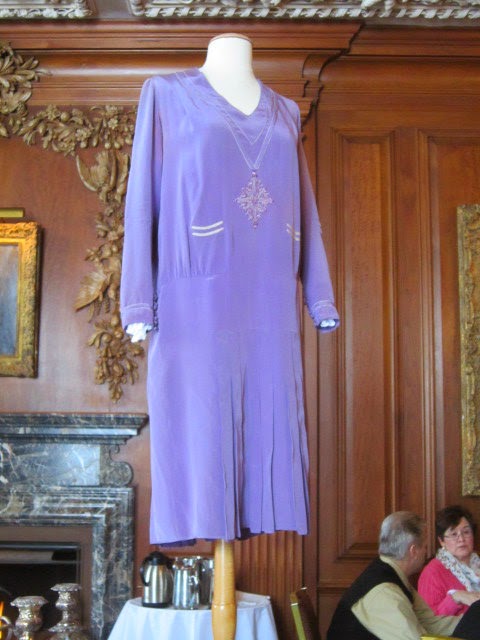 It was identical to the menu we had at the Christmas tea.  Everything was delicious. Starting at 12:00 o'clock position:  Spinach Quiche with Parmesan Peppercorn Sauce; Mini Pretzel Roll with Ham, Gruyere and Dijon Spread; Salmon Lox on Bagel Crisp with Boursin; Prosciutto wrapped Melon Slices; and Gorgonzola-Rosemary Drop Biscuit with Fire-Roasted Tomato Butter. 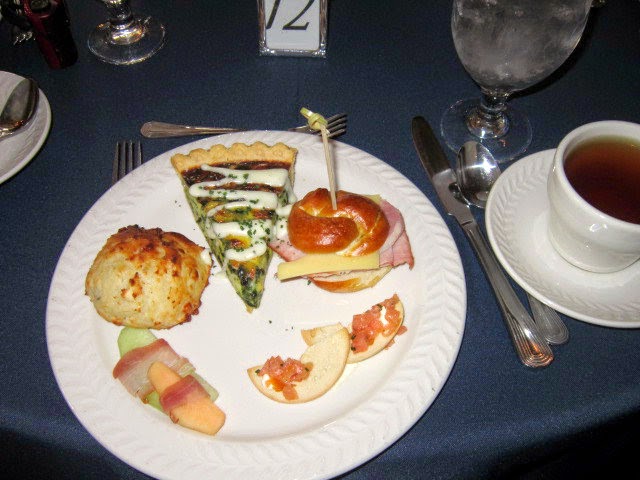 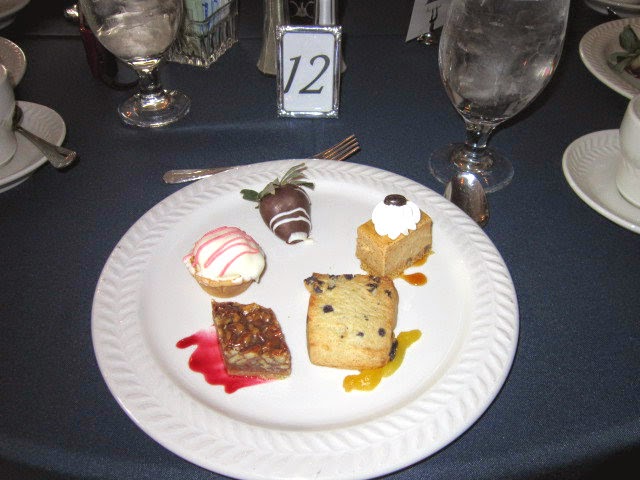 Pictured below is Madelyn, Meadow Brook's Curator.  She talked about how tea began in England, tea etiquette, and Matilda's silver pieces on the table. The original dining room table can be extended to accommodate 40 guests.  The portrait hanging on the wall behind Madeline is Matilda Dodge Wilson.  Madelyn said the first tea at Meadow Brook was when Frances Dodge [Matilda's daughter] made her society debut.  The last tea there when Matilda Wilson was alive was in 1965 for the Women's National Garden Association. 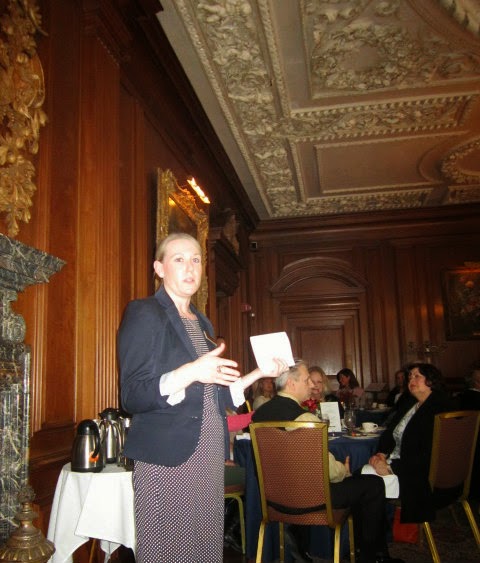 Ralph, one of the tour guides/docent.  I've been on one of his tours before, and he's excellent. He told us a little bit about the walnut paneled Christopher Wren dining room. Lori, Sandy and I were in group #3 [along with approximately 20 other ladies] and Sue was our docent.  Our tour began on the second floor in Mrs. Wilson's bedroom. The only two rooms in the mansion where photography is permitted is the Christopher Wren Dining Room and the Great Hall.  However, when I presented two private Downton Abbey teas at Meadow Brook last year they allowed me to take photographs in those rooms - the enclosed Sun Porch, and Mrs. Wilson's Study [Morning Room].

There were 1920's gowns of Matilda's displayed in various places, and Sue made comparisons between Downton Abbey and Meadow Brook. 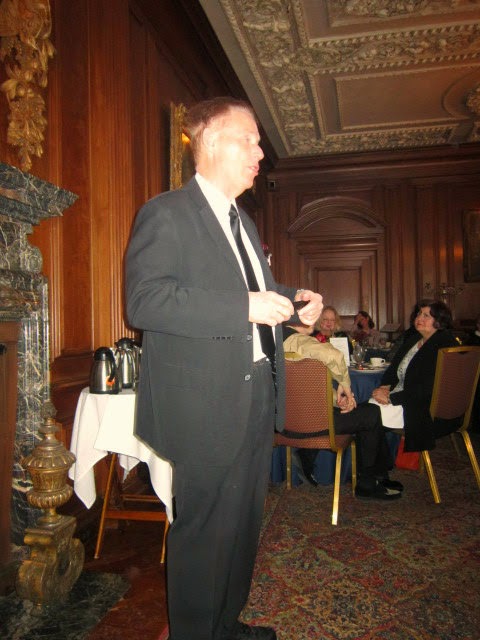 ~ Fireplace in the Great Hall taken at the end of the tour. ~ 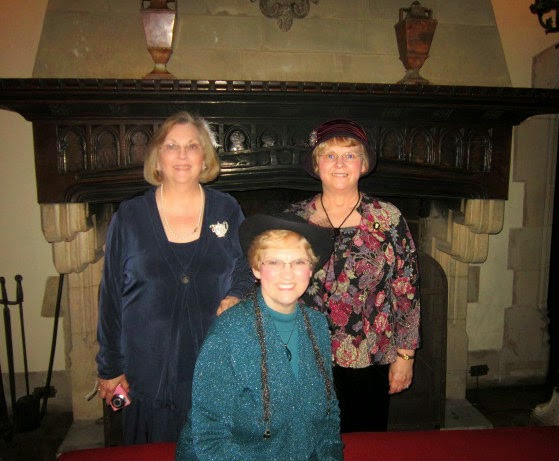 As we were leaving Elizabeth asked how many times I had been to Meadow Brook.  I gave a number off the top of my head, but after I got home and went through my Meadow Brook memorabilia I discovered this was my 7th tour of the home, beginning back in 1996, plus four visits where tours weren't included.  I was there in 2002 when they were still doing their Tuesday Teas, which I hope they'll reinstate someday.  This was actually my 11th visit to Meadow Brook.  I learn something new every time I go since docents share different information.  On this tour a black and white photo of the Dodge mansion on East Boston Blvd. immediately caught my eye since I had just talked about it on Sunday at my Hudson's presentation.  The Dodge's [John and Matilda and their children] were neighbors of J.L. Hudson and his family.

The Dodge Mansion is pictured below.  John Dodge had the home built in 1906, and lived there with his three children by his first wife, Ivy, who died.  He married Matilda in 1907 and she moved into the mansion, and they had three children together.  John died in 1920 and Matilda and the children continued living there until she sold it in 1923.  Matilda married Alfred Wilson in 1925, and together they built Meadow Brook Hall. 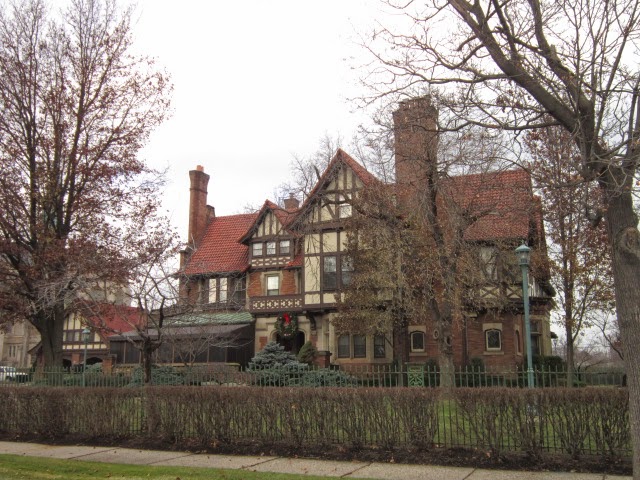 When I checked my blog posts, this is actually the 8th post I've written about Meadow Brook.  It's a remarkable place which I never tire of  visiting.

Posted by relevanttealeaf at 9:30 PM