Every year I coordinate a Spring Tea for the ladies of my church.   Our 2011 tea was held on May 7th - one week after the Royal Wedding of Prince William and Kate Middleton. Since the wedding was already past when my tea was scheduled, I knew I couldn't use the royal couple as a theme, so I decided to honor Queen Elizabeth II.    The tea was titled: "A Royal Tea Fit for a Queen."   Since Her Majesty is celebrating her Diamond Jubilee this year, she'd make a splendid guest of honor at a 2012 tea party too. 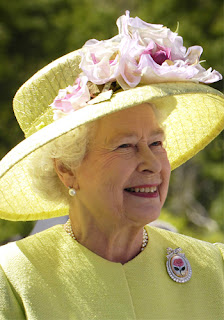 Our tablescape colors were purple and gold symbolizing royalty.  Our programs were rolled up and tied like scrolls. Inexpensive gold tiara combs carried out the theme and were favors, as well as a Darjeeling tea bag [which is said to be one of the Queen's preferred teas] placed inside of a tea bag envelope bearing Her Majesty's photo. 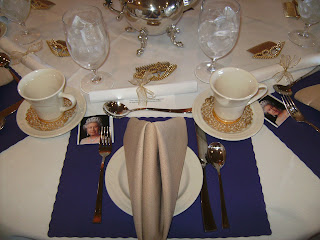 Each table had its own silver teapot which was filled from large urns of tea. I once attended a class taught by Alda Ellis where she said, "Silver is the jewelry of the table." I totally agree!


Gold card stock crowns with craft jewels affixed were placed on each table to indicate where each lady would be sitting. 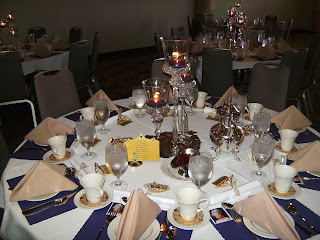 An "honorary" Queen attended on behalf Queen Elizabeth II, with her ever-present handbag! [She's a dear retired pastor's wife who attends our church.] 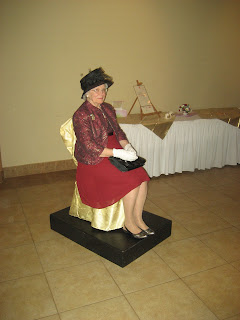 We did, however, have "official" greetings from Queen Elizabeth II. I wrote a letter to Her Majesty telling her that we were honoring her at our tea, and to my delight she had one of her Ladies-in-Waiting [Philippa de Pass] write a letter on her behalf to be read at the tea. It was one of the highlights, indeed! 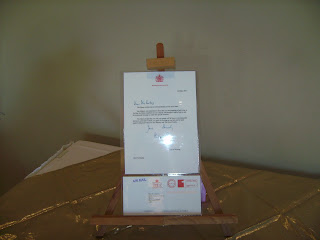 These three charming ladies were the "reader's choir" [or trio!] and entertainment at the tea. They shared snippets of the Queen's life from birth to present from a script I wrote. 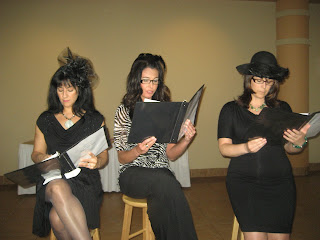 According to Darren McGrady, who worked as a chef in the royal kitchen at Buckingham Palace for 11 years, the Queen's favorite tea cake is Chocolate Biscuit Cake. You may recall Prince William requested it at his wedding for his Groom's Cake. The recipe is found on page 31 of Darren's book, Eating Royally. It can also be found at his website, www.theroyalchef.com.

In honor of Her Majesty the Queen and her favorite tea cake, I made individual, bite-size chocolate biscuit cakes for each of the ladies. They were perfect for a tea party and so regal! 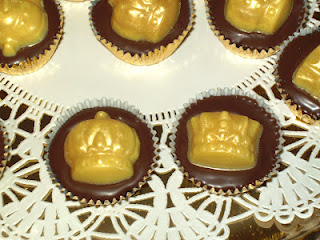 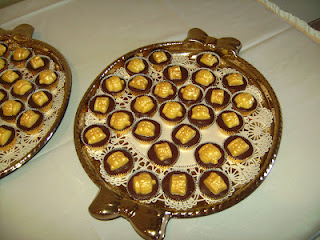 I modified Darren's recipe, doubling the amount of chocolate [from 4 oz. to 8 oz.] because it seemed too dry without additional chocolate. Darren's recipe calls for "almond-sized" pieces of McVities rich tea biscuits, but since my biscuit cakes were bite-sized, coarsely crushed pieces worked best.   When the biscuit cakes were set, I melted Merckens chocolate wafers to frost the tops of the cakes.

In keeping with the gold color scheme, I purchased gold foil mini candy cups - available at cake decorating and candy supply stores - as "containers" for the biscuit cakes. For stability I placed the foil cups in miniature muffin cup tins until the cakes were set.

Using a candy mold with assorted crowns, I melted yellow candy coating wafers and poured it into the molds. After they were set I lightly brushed them with "gold luster dust," and "glued" one on top of each cake with a dab of melted chocolate. It was a putsy endeavor, but well worth the effort. The gold crowns can be made well in advance and stored in a container in a cool place until time to use them.

We also served a decorated Union Jack cake, made by a budding pastry chef at church. 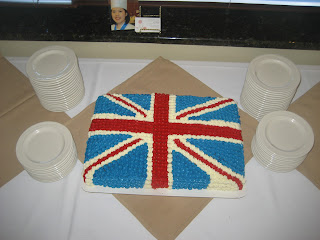 It was such a fun tea and I hope these photos have provided ideas and inspiration for a tea in your future.

Posted by relevanttealeaf at 12:39 AM