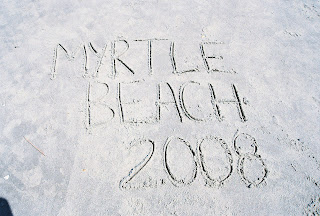 This is the third and final post about past family vacations in South Carolina. 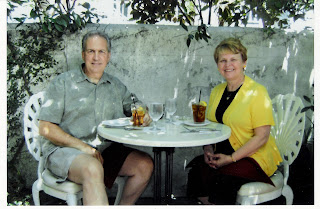 Our "headquarters" was Myrtle Beach, but we returned to Charleston for a visit.  A friend
suggested  we have lunch at "82 Queen Restaurant" in the historic downtown area.   It was fabulous!   The weather wasn't sweltering, so we were able to eat in the garden area.  We ordered Shrimp and Grits and it was outstanding.  I purchased their cookbook just to get the recipe!

Notice the glasses of iced tea on our table?  Here's a bit of trivia:  On April 10, 1995, South Carolina's grown tea was officially adopted as the official hospitality beverage [iced or hot] by State Bill 3487,  Act No. 31 of the 111th Session of the South Carolina General Assembly. 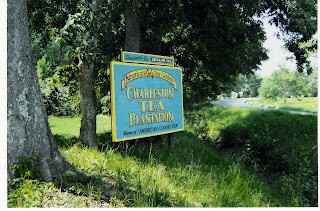 From the restaurant we drove to the Charleston Tea Plantation on Wadmalaw Island.  About 30,000 people visit the plantation annually. 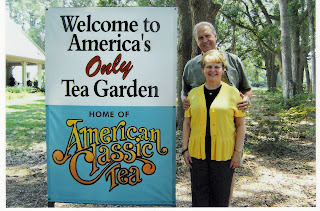 As you can see in the sign Jerry and I are standing next to, the Charleston Tea Plantation is America's only Tea Garden [Plantation].

In 2003 the Bigelow Family [owners of Bigelow Tea] purchased it, and formed a partnership with former owner, William Hall. 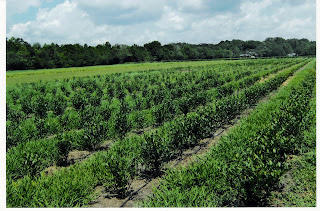 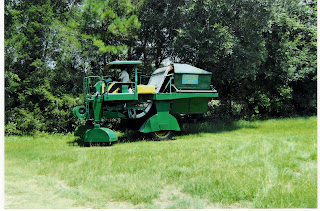 The "Green Giant" tea harvesting machine was custom made exclusively for the Charleston Tea Plantation.  There is no other machine like it anywhere in the world.  It trims only the top two leaves and bud that will be made into American Classic Tea.  The clippings are blown into a collection basket in a back compartment where they will be taken to the factory to sit over night during the "withering process." 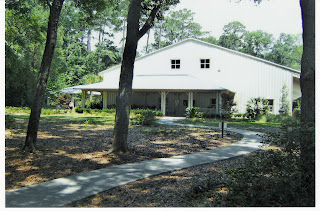 This is the tea processing factory where we were able to watch tea being processed,  view a movie, and browse in the gift shop. 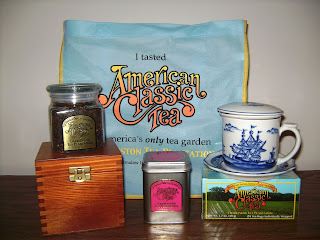 These were my purchases - a tea caddy containing a jar of "First Flush" loose tea [from the first harvest of the 2008 season], a lidded mug with tea infuser depicting a mid-1800's tea clipper ship, a tin of Rockville Raspberry black tea, and a box of American Classic black tea bags.

One side of the tea bag box reads:  "Over 100 years ago, tea planters brought their finest ancestral tea bushes from China and India to Wadmalaw Island near the historic old city of Charleston, South Carolina.   Now the direct descendants of these very plants have been lovingly restored to their former grandeur at Charleston Tea Plantation, a lush subtropical tea farm. " 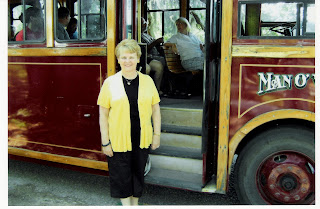 Boarding the trolley for a tour of the tea plantation.﻿ 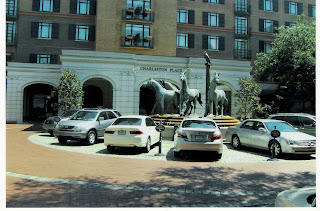 After touring the plantation, we returned to Charleston to meet a friend for tea at the Charleston Place Hotel.  This photo is the back entrance of the hotel. 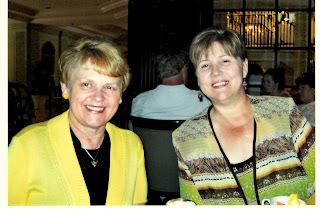 This is Denise, my "tea friend" who coordinated the 2007 London, England Tea Tour I went on.  She worked in Charleston at the time and took a late lunch to have tea with us. 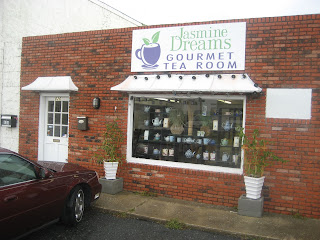 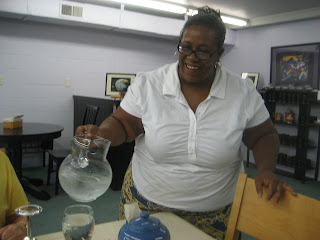 The owner was Jamaican. 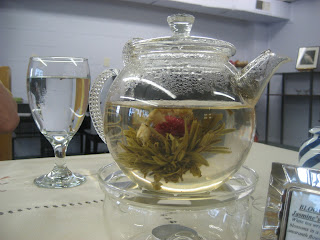 We were served a delicate white "artisian" tea.   The tea leaves are meticulously hand-tied  around a natural flower to form a ball.   As the tea steeps, the leaves unfurl allowing the flower to "blossom."   The tea is not only a delight to the taste buds [the tea leaves take on the flavor and fragrance of the flower], but the eyes as well.   The above photo shows its beautiful visual presentation,  and artisian teas are sometimes used for  tea table centerpieces.   It's a rather newly-innovated tea and goes by a number of names - display tea, flowering tea, blooming or blossoming tea, and hand-crafted tea. 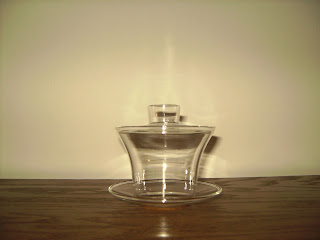 I seldom walk out empty-handed from a tea room with a retail area.  I purchased this clear glass "Guywan" at the Jasmine Dreams tea room.  Guywan is mandarin Chinese for "covered cup."   Guywans have a deep bowl with no handle, lid, and saucer.  Using a vessel like this requires a bit of mastering.   The tea leaves are put into the guywan, water is added, and the lid is put in place while the leaves brew.  The tea is drunk from the cup with the lid carefully angled to keep the leaves from escaping while drinking.  [I much prefer my clear glass Bodum mug and decanted tea!]

Guywans are used in the Chinese "Gongfu" method of brewing - a subject for a separate post.
Posted by relevanttealeaf at 12:12 PM