A Christmas Present from Dean & Deluca

Even though we're two months past Christmas, I'm still enjoying a gift I received from a dear friend - "Discovering the Cultures of the World" gift box of fine teas from LE PALAIS DES THÉS. 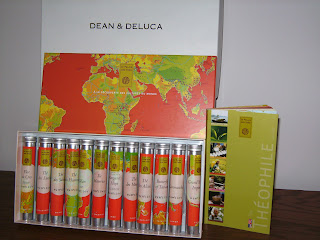 There are  12 tea samples in aluminum vial-like tubes, each producing six cups of tea.  A 128 page guide book accompanies the teas, taking the reader on a tea journey of cultures and flavors, with photos of tea estates and tea utensils from the countries visited.﻿ 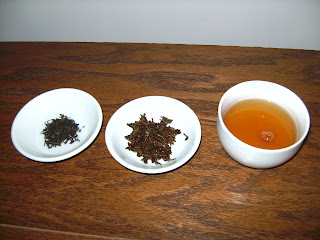 The very first tea I wanted to sample was a second flush darjeeling from Margaret's Hope tea estate.   The story of how this estate was named  is interesting [although the  stories vary].  According to some accounts, the garden was owned by a man named, Mr. Bagdon,  in the 1930's.   He and his two daughters sailed from England to India to visit the garden.  The younger daughter, Margaret, fell in love with the estate and "hoped" to return.  But during the return trip to England, she became ill and died.  In her memory, the grief-stricken father changed the garden's name to "Margaret's Hope."   It is nestled in the Kurseong Valley of the Himalayas.

Darjeeling teas are high altitude teas.  They are one of the most prestigious teas in the world, and are reserved for export.   According to the book, there are 90 tea plantations in the Darjeeling area.  That's a lot of tea bushes!

"Second flush" means the tea leaves were plucked in the second harvest between May and June [summer], before the monsoon season.  This tea produces a shiny, golden color, as you can see in the above photo.  [Notice the dry leaves before steeping, and the wet leaves after steeping.]  This sample was described as an ideal morning tea with a fruity, invigorating flavor.


It is steeped at 205 degrees F [just under boiling] for 3 minutes.    For me, it is a perfect  Afternoon Tea choice.


Stephanie, at Steph's Cup of Tea blog, visited Darjeeling last September and stayed at Glenburn Tea Estate.  She experienced first-hand what I've only been able to read about.

These 12 teas are providing a fun learning experience, and I am enjoying it very much.


Posted by relevanttealeaf at 5:00 AM

Email ThisBlogThis!Share to TwitterShare to FacebookShare to Pinterest
Labels: tea