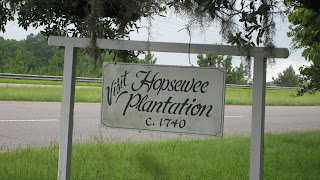 In 2010 our family returned to South Carolina.   This vacation included a Southern Afternoon Tea at Hopsewee Plantation in Georgetown - halfway between Myrtle Beach and Charleston. 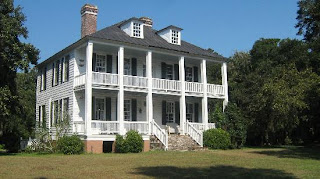 Hopsewee, a South Carolina National Historic Landmark, is a preservation rather than a restoration.   It has only had five owners even though it was built almost 40 years before the Revolutionary War. 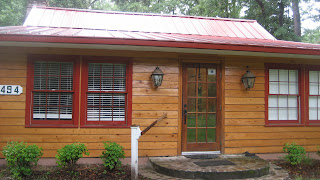 Tea was served at the River Oak Cottage. 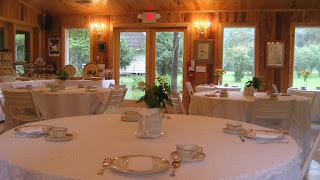 The beautifully decorated tea room inside the cottage. 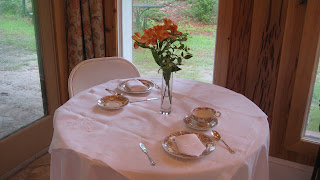 A Tea for Two Table 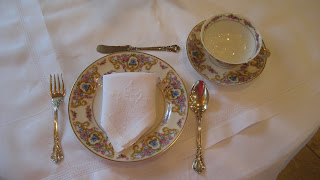 ﻿
The place setting at our table.  The vintage rice linens were beautiful﻿.  They were so delicate you could almost see through them.  The china was backstamped Theo. Haviland, France, Renissance pattern.  [I peeked when no one was looking!]  I was amazed they actually used sterling silver flatware.  ﻿ 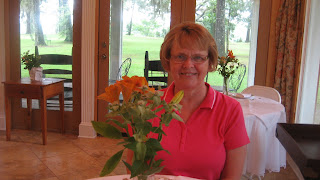 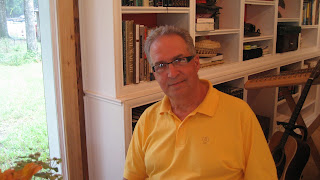 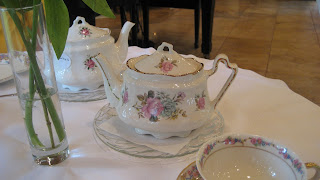 They served "bottomless" pots of tea [at no extra charge].  The tea was loose-leaf, which was decanted before the teapots were brought to our table.  ﻿ 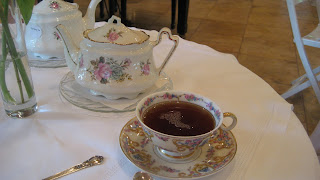 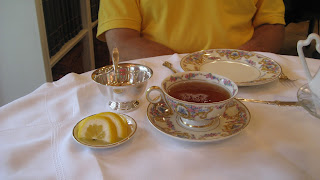 I don't use sugar in my tea but Jerry does, and they served brown sugar granules in a silver bowl to him. 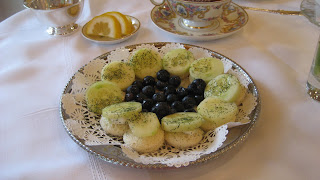 The open faced cucumber sandwiches were about the size of a fifty cent piece.  A cream cheese filling was piped onto the bread and a slice of cucumber sprinkled with dill was placed on top.   They surrounded a mound of blueberries in the center of the tray. 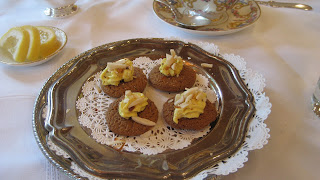 Curried chicken salad on gingersnap cookies garnished with toasted slivered almonds.  A rather strange sounding combination, but they were yummy! 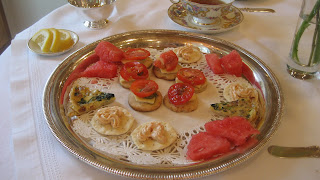 I forgot to take a photo of the savory tray when it was first brought to our table, so the photo is missing a few items, but there were two slices of spinach quiche per person [which was just coming out of the oven when we arrived], homemade parmesan crackers topped with mozzarella, pesto and tomato, and salmon mousse piped onto water crackers.  The tray was garnished with fresh, sweet, juicy watermelon wedges.  Everything was delicious! 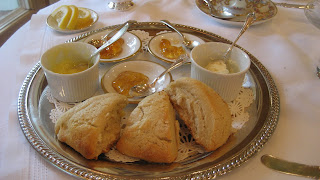 Freshly baked scones accompanied by homemade lemon curd, cottage cream [a mock Devonshire cream], and three of their homemade tea infused jams.  I purchased some jasmine tea to make a jam when I got home, but the project never happened! 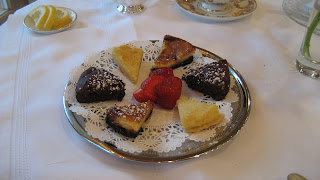 The dessert tray consisted of wedges of flourless chocolate cake [similar to a brownie], lemon tart, and a chocolate crusted cheesecake.  ﻿ The tray was garnished with sliced strawberries.

This was the most food I have ever been served at an afternoon tea - must be that Southern Hospitality!  No one could ever leave the River Oak Cottage complaining they didn't get filled up on "tea food" - not that getting filled up is the main objective in afternoon tea. 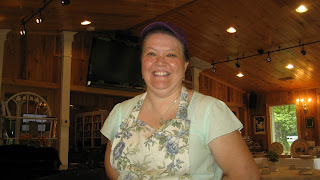 Our server was from Manchester, England and had only lived in Georgetown two years.  She said she liked South Carolina, and was trying to adapt to the hot weather.

Tea time at Hopsewee Plantation was definitely one of the highlights of the vacation - aside from spending time together with family.  I highly recommend it!

Posted by relevanttealeaf at 12:04 AM