If you love tea, you probably love all the accoutrements and equipage that accompanies it, both  present and past.

A tea caddy  from the nineteenth century was on my wish list for a long time.  I drooled over them on E-bay and in antique stores, but they were either out of my price range or not the highest priority at the time.

I discovered last December that being in the right place at the right time sometimes has its advantages.   Visiting a  shop  for other purposes brought me face to face with two nineteenth century tea caddies.   How awesome was that?!   And the prices weren't exorbitant either - a very nice surprise!

I looked longingly at each of them, but left without either one.   I must confess, however, they kept resurfacing in my mind, and a few days later I rationalized that it if was meant for me to have one, they would still be at the shop when I returned.  A big smile crossed my face when I walked in and saw both of them sitting right where I had left them.

Decisions!  Decisions!  Which one would it be?  After much deliberation, I made my choice, and at long last I became a twenty-first  century owner of a nineteenth century tea caddy! 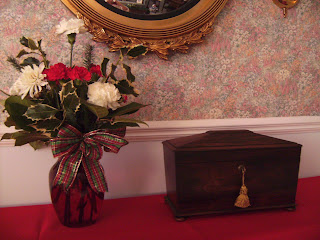 The tea caddy I selected has three compartments, two of which can be lifted out.  They are for storing green tea, black tea, or sometimes brown sugar [which was also expensive].  The compartment in the center holds a mixing bowl for blending the tea.  I was pleased the key was still with the caddy, because often they were lost over time.

A chatelaine would be nice now - the chain where the mistress of the house often kept the important keys for her home, and attached  it to her belt.  Because tea was so expensive, the task of brewing it was never left to the servants, but was always done by the host or hostess, or one of the daughters of the household.   The guardian of the tea caddy carried the key everywhere, even away from home. 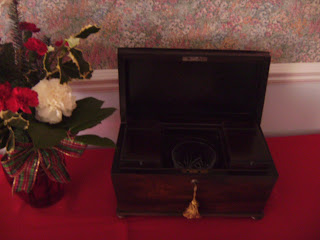 Tea caddies were designed to hold one pound of loose tea.   Tea drinking was fashionable, but due to its cost,  proper storage was necessary for its preservation.  Tea chests with sturdy locks affirm it was a valuable commodity that  had to keep kept safe and secure, as well as fresh. 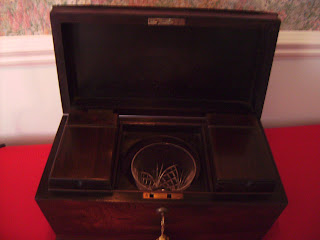 The inner compartments were usually lined with a tin foil, or a lead and tin alloy, known as tea pewter.  Alas, these had been removed from my caddy.

The mixing bowl to my caddy was broken as well.   Due to their age, this is  a common occurrence, but the shop keeper substituted a Waterford crystal glass in the mixing bowl's place.   Though not original, I was happy with it.

The caddy is solid wood - mahogany, I think - and sits on turned wooden feet.

I am very happy to own this piece of tea history.  If tea caddies could talk I wonder what mine would say about its previous owners and the many tea times it provided in bygone years.