I'm closing the month of July with a picture of the world's most valuable teapot that came through my Facebook feed yesterday. 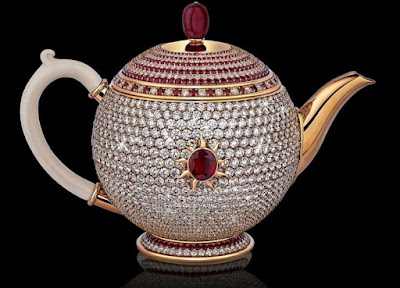 The teapot is called 'The Egoist' and was designed by Mr. Nirmal Sethia to reflect the radiance of his late wife.  It is valued at $3 million.  The purest diamonds and rubies decorate the teapot, all carefully selected.  1,658 brilliant-cut diamonds and 386 round brilliant-cut rubies sparkle and shine, with a centerpiece of a fine Thai ruby framed in the shape of a sun.

Mr. Sethia is the founder of premium brand Newby Teas in London, and the owner of the largest collection of rare and valuable tea-related artefacts in the world.  Among his collection is a silver gilt monkey teapot that once belonged to Admiral Nelson, made in Germany circa 1600, and Theodore Roosevelt's tea caddy.

In addition to the Egoist, Mr. Sethia designed the Cobra teapot and eight others.  He has 1,700 teapots in his collection. 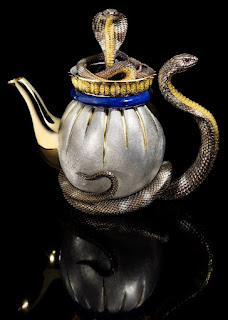 He says his 'first love' was tea when he became a tea taster at the age of 14 in London.  He believes tea is not just a hot drink, but an art and culture that is connected with nature and the philosophy of life.  He was quoted as saying, 'Tea is like a beautiful woman, not only recognized for her appearance, but also valued for her character.  Similarly, tea is valued for its character."
Posted by relevanttealeaf at 8:27 PM

Email ThisBlogThis!Share to TwitterShare to FacebookShare to Pinterest
Labels: "The Egoist" Teapot