My new-to-me repro French Veilleuse-Théières [pronounced VAY-yerz - TAT-ee-yair] arrived in the mail and I'm very pleased with my purchase.  Veilleuse means night light or side light and Théières means teapot. 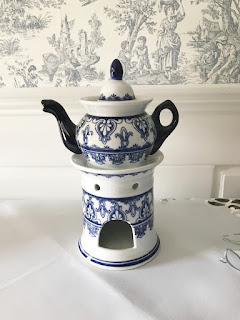 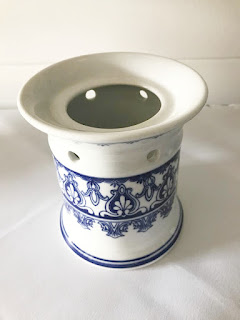 Next was the decision of where to display it.  My living room built-ins are maxed out but I managed to find a spot above the piano, next to the figurines.  I needed a good excuse to climb up there to dust anyway.  ;-) 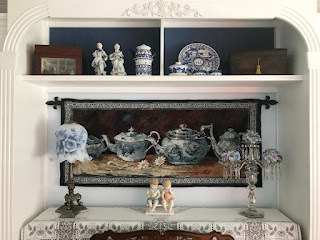 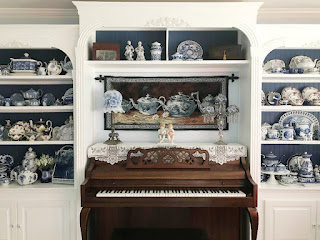 And while I was by the piano, I decided to indulge myself by taking 30 minutes or so out of my day to play some hymns that are always an inspiration.  I bought the hymnal pictured below in 1970 and it's almost a relic now, replaced by large screens used in most churches to project words to today's contemporary music.  I like a lot of the contemporary songs, but they can never replace the hymns that have so much depth and substance.
My piano playing revealed it's time [past time actually] to schedule a piano tuning! 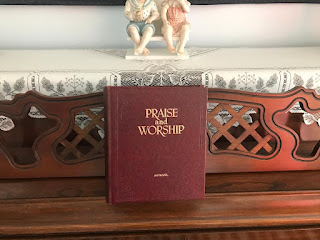 In closing, here's a bit of 'this and that'.
I subscribe to Jan Whitaker's Restaurant-ing Through History blog.  She recently wrote a post about humorous names/lingo for simple restaurant orders that were used in the 1800's and early 1900's.  She said eggs received the most slang phrases because there were so many ways to prepare them.  An example for scrambled eggs on toast was 'wreck on a raft'.
It was fun to see there were phrases for tea too.  The waiter referred to a cup of hot tea as, 'a cup of China', and a cup of tea without milk was 'Hong Kong on crutches'.  An order for a glass of ice water was 'An Artic'.  These phrases must have been created for amusement and to keep jobs from becoming boring.
*  *  *
I follow The Teacup Attic on Facebook, and this morning a photo of a giant floating teapot fountain in China was posted. 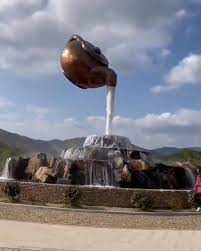 I was so intrigued I did a Google search and found there's more than one floating teapot fountain in the world.  One exists in Temple City, California too. 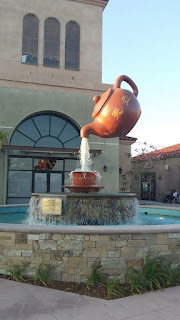 When we were at Sweet Shalom last Friday, Teresa, who loves all things tea, mentioned she was coming to Michigan soon to pick up a statue called Tea Girl from Warmbier Farms near Bay City. She was making a day of it with stops at a couple of tearooms along the way.  I had never heard of this garden statue before, so had to search for it, and found a couple of pictures.  It's reasonably priced at $74 and is one of Teresa's birthday presents.  Happy Birthday, Teresa! 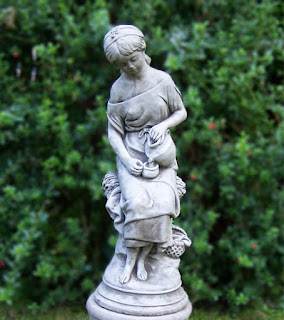 Have you made any new discoveries lately?

Posted by relevanttealeaf at 1:51 PM