A Wedding at St. Clair Inn

Yesterday we drove to the St. Clair Inn, [in St. Clair, MI] for our daughter-in-law's brother's wedding.  He's the last of the Theisen siblings to marry.

Rain was predicted all week long, but Mother Nature was kind and gave them a sunny, 85 degree day - perfect for an outdoor wedding overlooking Lake St. Clair. 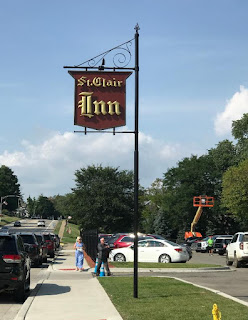 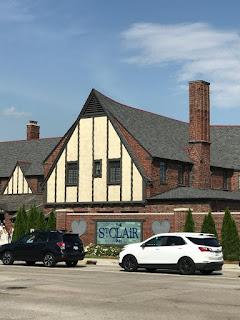 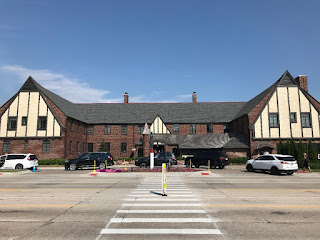 There's a reason all the chairs were empty prior to the ceremony - it was very hot in the sun so everyone was standing in the shade until minutes before the wedding began. 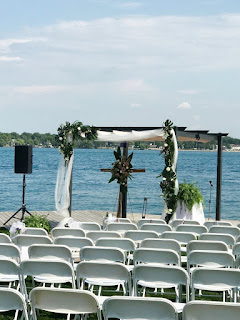 The two older girls in the "Bride Tribe" passed out hand fans before the ceremony began, and they were much appreciated. 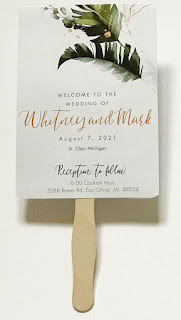 The reverse side of the fan was the printed Wedding Party.  The Theisen Family is large - 5 children and their spouses and 19 grandchildren, compared to just Whitney and her brother and 2 grandchildren on the Marshall side.   Mark and Whitney wanted every family member to be included in their wedding party plus a couple of close friends so it was a very large wedding party. 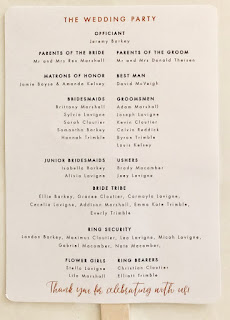 Don and Roxanne with their 19 grandchildren. 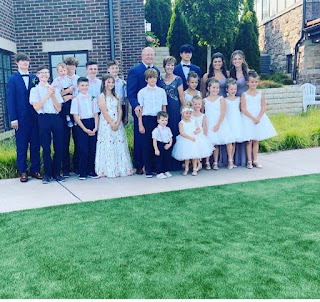 The procession began with a bagpiper. His bagpipe music accompanied each one down the aisle.  Whitney's maiden last name was Marshall, which is Scottish in origin. 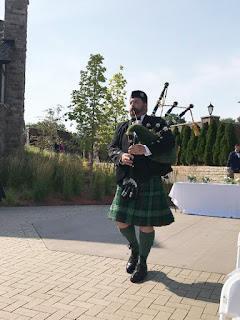 Don and Roxanne [Parents of the Groom] 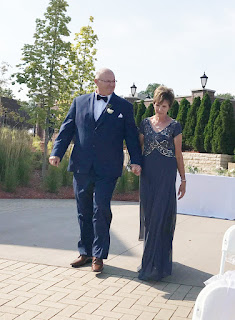 Imagine our surprise when we discovered our son, Jeremy, was officiant.  He took the online course that made him legally qualified to perform the ceremony. 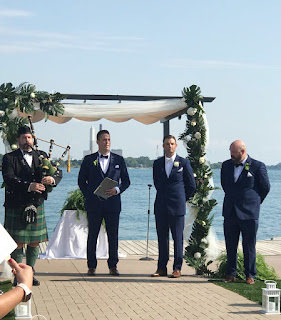 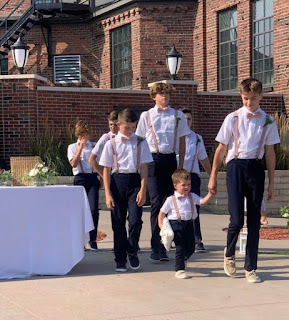 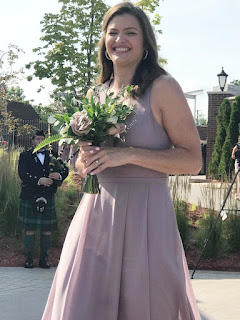 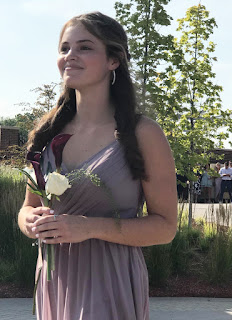 The "Bride Tribe." Granddaughter, Ellie, peeking through in the back row. 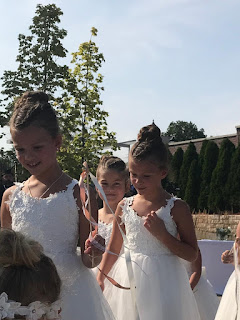 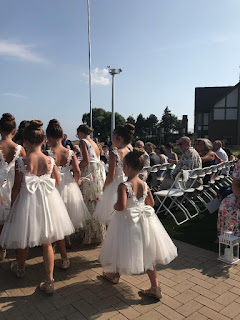 And last but certainly not least, the beautiful bride, Whitney, and her father. 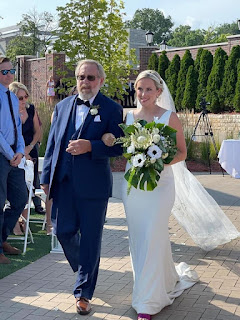 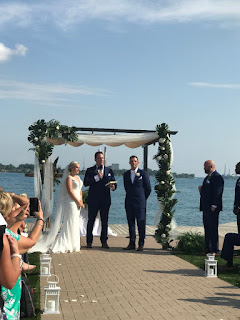 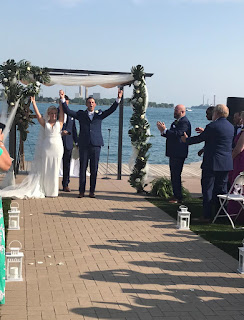 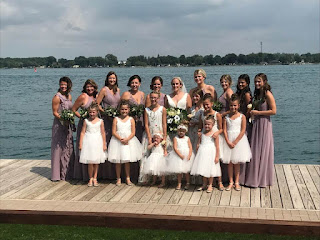 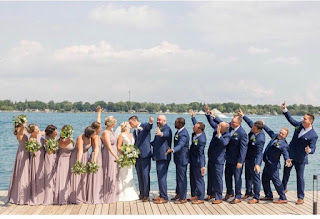 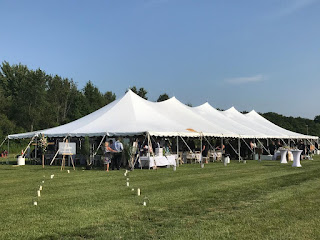 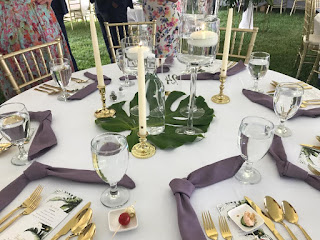 While we waited for the wedding party to arrive, yummy "starters" were served.  I couldn't resist taking a picture of the cute Charcuterie Cone. 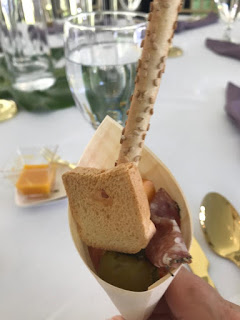 Three of the "Ring Security" minus their suspenders and boutonnieres, and with untucked shirts, but two of them still had their bow ties on.  Grandson, Landon, is on the left, with two of his cousins. 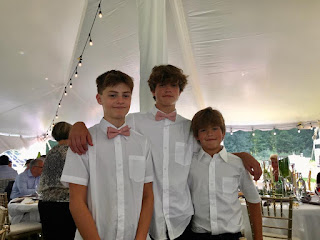 Granddaughter, Ellie, with her Cousins 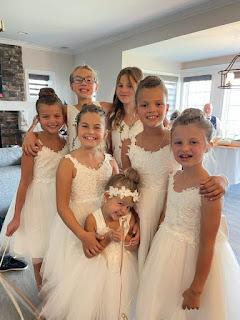 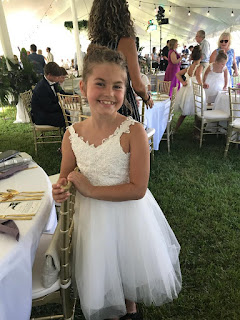 Proud Papa and Nana had to have their picture taken with Izzy. 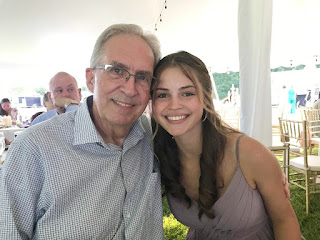 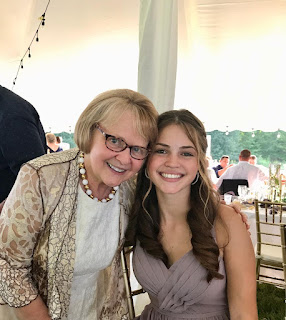 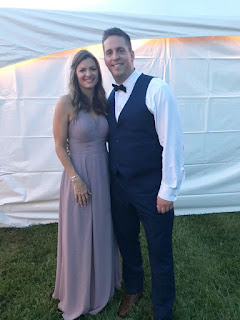 It was a lovely afternoon / evening, and we wish God's best blessings on Mark and Whitney's marriage.  No mention of tea in this post, but I did sip a cup of Harney & Son's Blueberry Green Tea while writing it.  ;-)
Posted by relevanttealeaf at 1:06 PM

Email ThisBlogThis!Share to TwitterShare to FacebookShare to Pinterest
Labels: Mark and Whitney's Wedding