A Victorian Bride at The Whitney

Three weddings took place at The Whitney yesterday, which is not unusual, but one in particular stood out when I got a glimpse of the bride.   As soon as I saw her, I knew her gown was from the mid-1800's era and she was emulating Queen Victoria whose wedding to her beloved Prince Albert took place on Feb. 10, 1840.

I wanted to take the bride's picture but didn't want to be intrusive.  Imagine my delight when I saw pictures on Facebook this morning of the wedding posted by Jackie Wakeling Jacobs, the seamstress who made the gown, and owner of Past Reflections.

I had a brief opportunity to speak to the bride as I passed her in the hallway while she was waiting for the elevator.  I told her she looked beautiful and that she reminded me of wedding pictures of Queen Victoria.  She smiled and said her gown was authentic to the Victorian era.

Below is Queen Victoria's wedding picture in her white silk satin gown.  She is credited with starting the tradition of white bridal gowns. 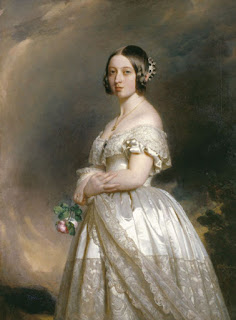 Enjoy the pictures from yesterday's wedding at The Whitney courtesy of Past Reflections. 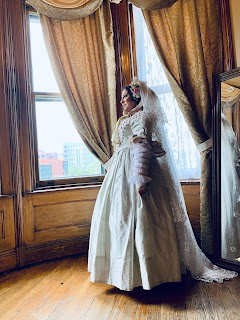 I smiled when I saw one of our teapots and cups and saucers sitting on a table [lower left corner], because Queen Victoria, who loved tea, probably would have sipped it while getting ready for her wedding ceremony too. 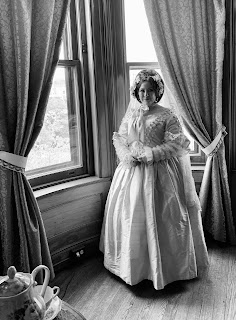 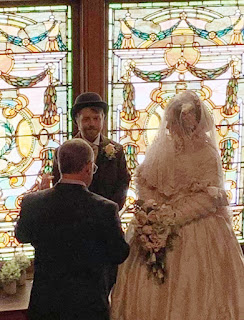 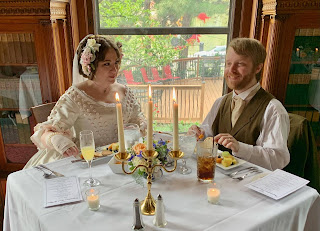 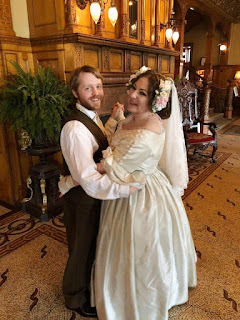 The small, intimate reception was held in Mr. Whitney's library.  Guests were given a china teacup as a remembrance of the happy occasion.
I first met Jackie Wakeling Jacobs back in 2005 when I helped at Tea by Three tearoom. Cheryl Nix, the owner, invited Jackie on a couple occasions for a program on vintage clothing.
The photo below was a Halloween tea and the topic was Victorian mourning clothes.  Jackie is shown modeling a mourning outfit she made.  Victorians took mourning very seriously. 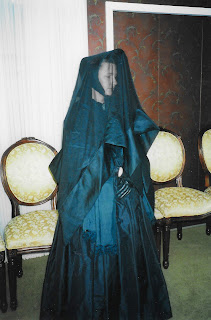 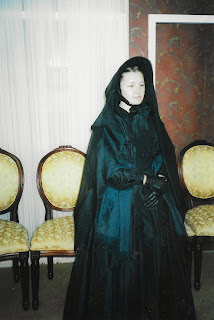 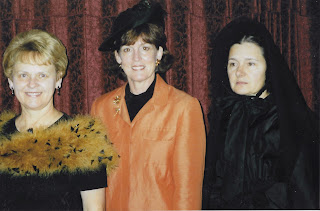 I wish I would have seen Jackie yesterday, but I was busy with my responsibilities, and she was probably busy helping Emele.
I hope you enjoyed this Victorian wedding vicariously.

Posted by relevanttealeaf at 12:46 PM

Email ThisBlogThis!Share to TwitterShare to FacebookShare to Pinterest
Labels: The Whitney