Yesterday was the monthly tea at Shorepointe Assisted Living, and the program was a continuation on the life of Eleanor Roosevelt.  I was also supposed to include a travelogue about the Southern Belle Tea Tour that hurricane Irma so rudely postponed, but there was more than enough information about the 1933 Inauguration [Franklin's first], and Eleanor's White House years as First Lady to easily fill an hour. 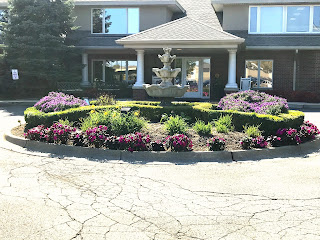 The teas, which begin at 2:00 p.m., are very simple and informal because the residents have just finished Sunday dinner.  They consist of a selection of tea bags and carafes of hot water and an assortment of pastries. Since I was elaborating on the Inauguration Day schedule - which included an Inaugural Tea in the State Dining Room and East Room for 2,000 or more guests following the Inaugural Parade, I wanted this tea to be a little more special.

I phoned the activities director to ask permission to bring my silver teapots and tea [made from loose-leaf tea], and my request was granted.  Below are two of the faithful ladies who come every month.   I would love to do a fancy tea for them someday. 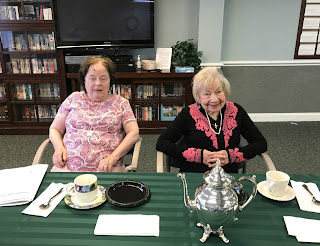 I was never asked to provide a 'favor' every month, but I always bring a small one because the residents seem to look forward to them.  Eleanor Roosevelt wasn't big into cooking unless it was a hot dog cookout at Val-Kill.  She really didn't need to cook since she had servants to do it [although in 1920 she did take some cooking lessons].  There was one food, however, that she did like to prepare - scrambled eggs! They were always on the menu at the Sunday night family meal, and she scrambled them in a silver chafing dish. I had hoped to get each resident a Cadbury Creme Egg [a chocolate shell with a white and yellowish fondant filling that resembles a chicken's egg]. After striking out at three different candy stores, I consulted the Internet and discovered Cadbury only brings them out at Easter time to ensure they'll always be a 'special' Easter treat. So I settled instead on Almond Joy miniature candy bars since Eleanor brought 'Joy' to so many people. She was also a tough nut to crack in her mature years, saying any woman in public life had to develop skin as tough as rhinoceros hide! Many people wouldn't have been able to endure the disappointments and hardships she encountered throughout her lifetime and emerge with such greatness. 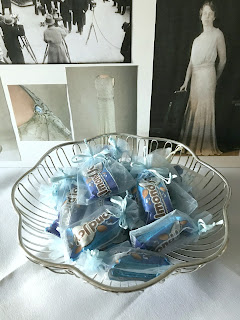 I put the candy bars in light blue silk organza bags because the gown Eleanor wore to the Inaugural Ball in 1933 was a slate-blue crepe gown.  It was designed by Sally Milgrim, and the color was dubbed "Eleanor blue."  I enjoyed seeing the gown displayed at the Smithsonian with all the other First Lady's inaugural gowns on my visit to Washington, D.C. in 2015.

The black tea I chose to take coordinated with the candy bars since it had flecks of coconut and almond flakes in the dry leaf.  It's official name is Snowflake Tea, blended by East Indies Tea Company in Lebanon, PA and it's SO good.   The residents enjoyed it.

Last month their favor was a tea bag and packet of chocolate chip 'teddy grahams' in honor of Eleanor's uncle, Theodore Roosevelt.  Her famous quote, "A woman is like a tea bag;  you never know how strong it is until it's in hot water" was enclosed. 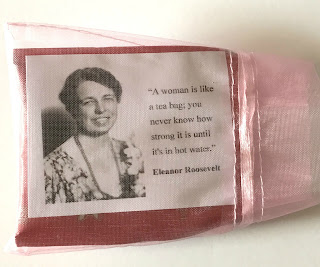 My research revealed there were certain duties that Eleanor thought were useless burdens, but later realized their meaning and value.  White House teas were one of those duties.  It seemed futile to her to receive anywhere from 500 to 1,000 people on a given afternoon and shake hands with them, and then have them pass into the dining room to be given a cup of tea [or coffee], but she discovered the White House was a place with deep significance where hospitality was dispensed. So she did it regularly, three times a week during the winter months.  In 1939 she greeted 9,211 guests at White House teas! 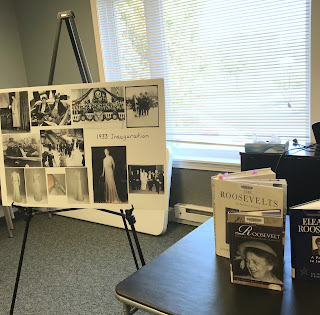 The Internet says 59 books about Eleanor Roosevelt have been listed in Good Reads.  That probably isn't inclusive of all the books written about her. She was a fascinating and incredible lady who won the hearts of many people around the world, and gained the title First Lady of the World.

Up next month... Halloween traditions and how it all began.

After my presentation I went home and got my hubby to go to dinner at P.F. Chang's, using the gift card from one of the Southern Belle Tea Tour participants [for a tour that never happened - yet!]. There's never time to eat Sunday dinner before I go to Shorepointe because I go right from church, so this was a treat. 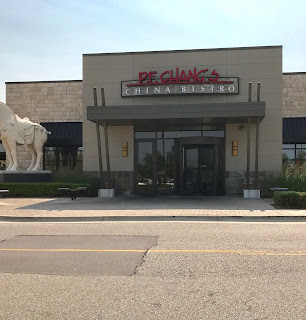 The closest P.F. Chang's to me is at Partridge Creek.  I managed to snap the photo below without any people in it, but it was bustling with people on the unseasonably warm September Sunday afternoon.   We've been having recording breaking temps in the high 80's since 1920. 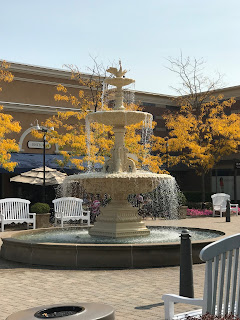 Jerry and I are very predictable and order the same thing every time:  White Tangerine Tea, Chicken Wraps, and Sesame Chicken.  I forgot to take a picture of the Sesame Chicken, but it was yummy! 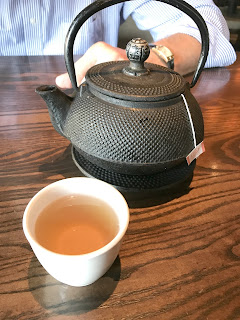 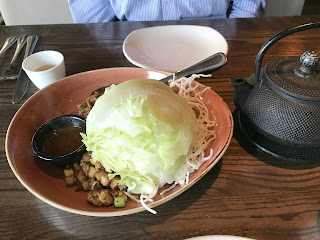 Posted by relevanttealeaf at 11:40 AM