An Afternoon in Detroit

I've been in my office a lot this week working on my monthly presentation for Shorepointe Assisted Living this Sunday.  At the resident's request, the program last month was about Eleanor Roosevelt, but I didn't have time to finish the entire presentation, so they asked if I'd finish it this month. Rather than picking up where I left off, I decided to begin this presentation with the 1933 Inauguration and Mrs. Roosevelt's years as First Lady in the White House.

Her 78 years of life were so full, and so many books have been written about her that it's hard to decide what to share.  Trips to three different libraries yielded 16 books to skim through. 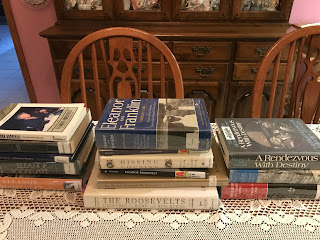 When I received a phone call yesterday from a woman working on a project [undisclosed at this time], asking if I could meet her at the former home of J.L. Hudson, founder of Detroit's iconic Department Store, I was more than happy to set aside my research and join her this afternoon.

The time was set for 2:00 p.m.  When we arrived at the house, Sister Rosemarie was sitting on the front porch waiting for us.  The house has been owned by the Catholic Archdiocese of Detroit since 1926, and the Sisters, Home Visitors of Mary presently live in it.

I first met Sister Rosemarie in December 2014 when I toured the house for the first time. Then I returned in February 2015 to do a program about J.L. Hudson as a fundraiser for their work in Nigeria.  The tree-shaded house looked much different today since the leaves haven't fallen yet. On this fall day our temperature was a hot, unseasonable 86 degrees!  Iced tea, anyone? 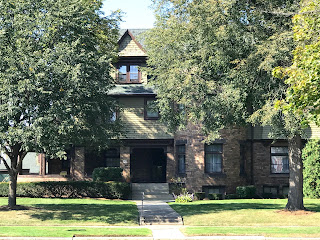 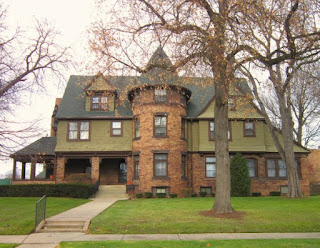 Sister Rosemarie allowed me to take her picture as we sat in the living room chatting.  The tiles on the fireplace in the background are original to the house from Detroit's Pewabic Pottery.  Elizabeth, the lovely lady who met with us was camera shy. 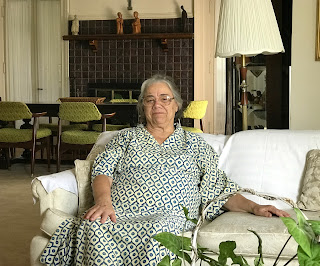 We were only a few streets away from the house that Henry and Clara Ford had built from the profits on his Ford Models N, R, and S, so we decided to pay it a visit [from outside since it's a private residence]. It was exciting to actually see the house I've read about in books. Can you imagine living in a house that Henry, Clara, and Edsel Ford once lived in, or J.L. Hudson and his niece, Eleanor Clay Ford?  If only those walls could talk to us! 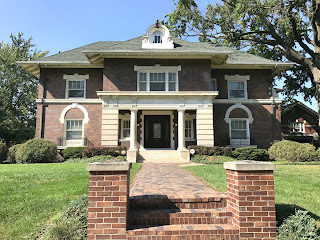 The Italian Renaissance Revival style brick house was built during 1907-o8 on several adjoining lots. It features Tuscan columns and windows with balustrades and limestone arches. 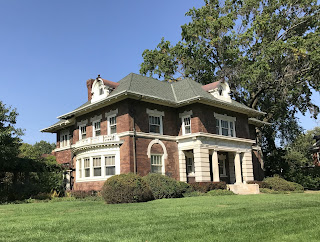 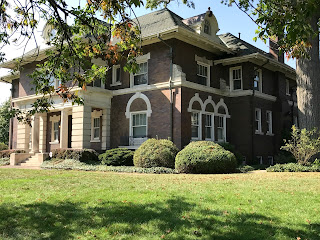 Henry had a well-equipped machine shop built over the garage [pictured below] for his son, Edsel, who was 14 years old when they moved into the house. 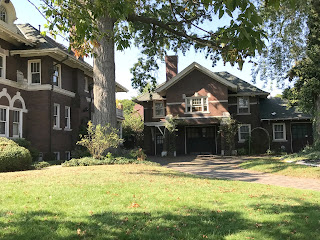 Clara's pergola and gardens are still there 102 years later. 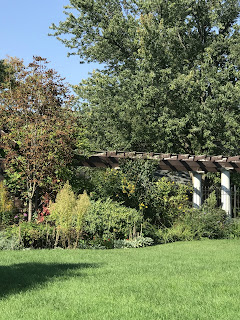 The house became a Michigan Historic Site in 1986. 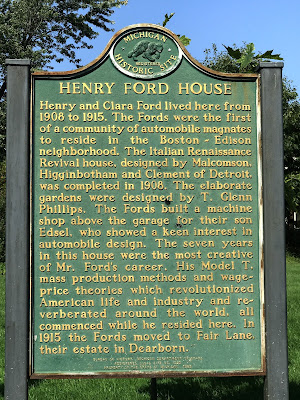 It was a fun afternoon.  Now I'm back at my computer, sipping a cup of tea, and getting ready to hit the books again!

Posted by relevanttealeaf at 8:59 PM