To get in the spirit for Downton Abbey's first episode of season V last night, I attended a Downton Abbey tea at the Farmington Hills Community Library at 1:30 yesterday afternoon.

A tea friend e-mailed me to tell me about the tea [thanks Laura Lee!] and I registered for the free event promptly.  It was lovely! 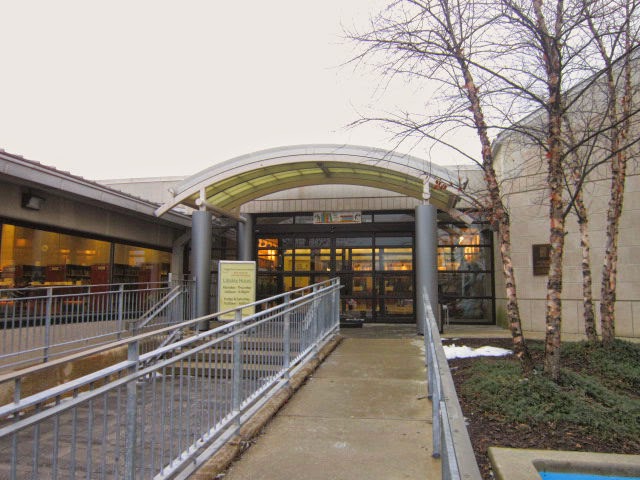 As we entered the library auditorium we heard the theme music from the television series playing softly in the background. 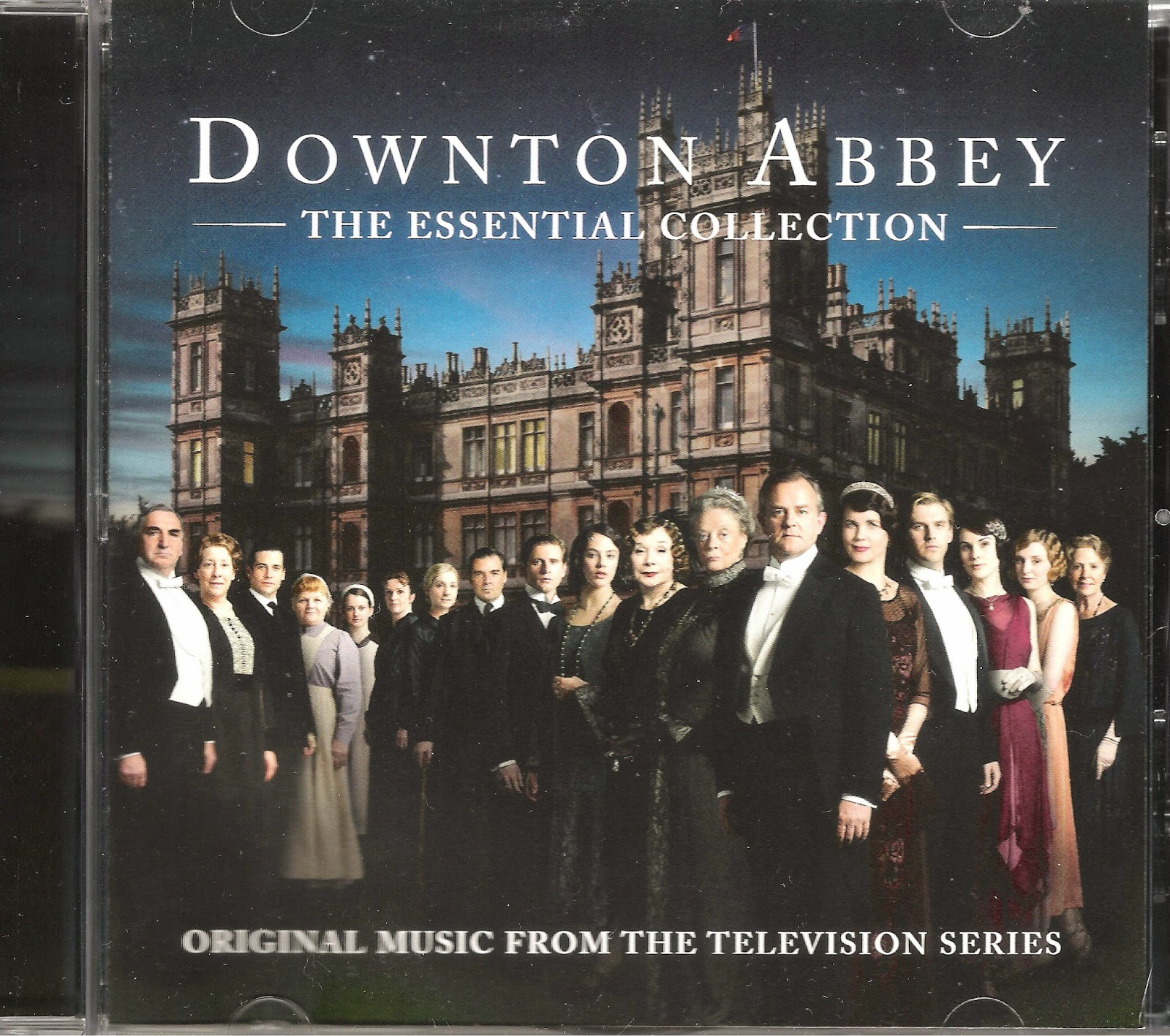 The focus of the program was fashion through the ages [but also included automobiles], and we were encouraged to dress in our historical best.  Several people - including me - did just that!  I got permission to photograph this lovely group of five ladies representing the three Crawley sisters, Lady Cora, and Lady Violet.  How fun! 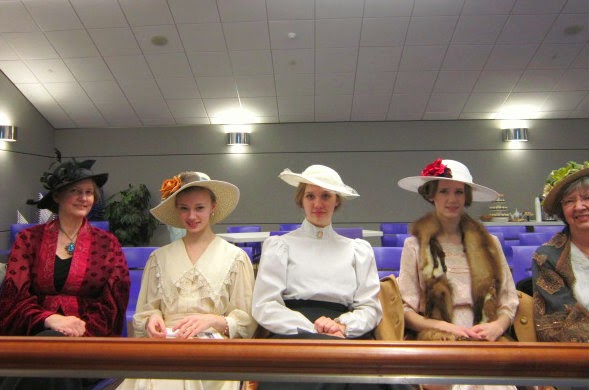 The event began with tea and light refreshments. 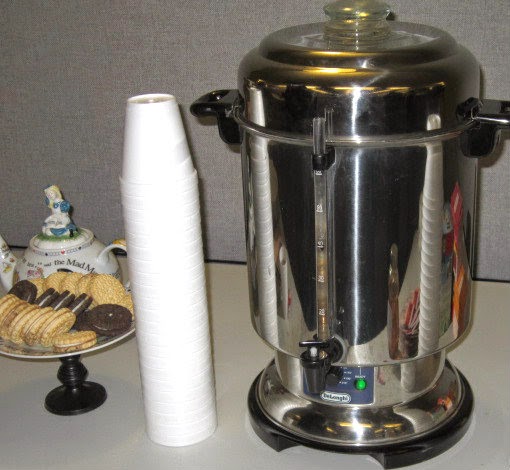 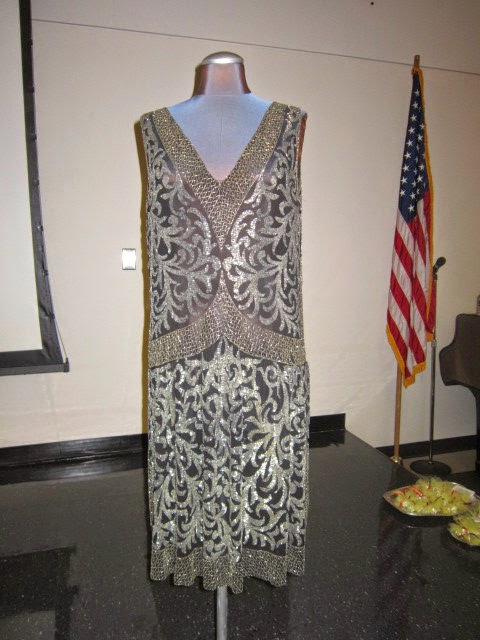 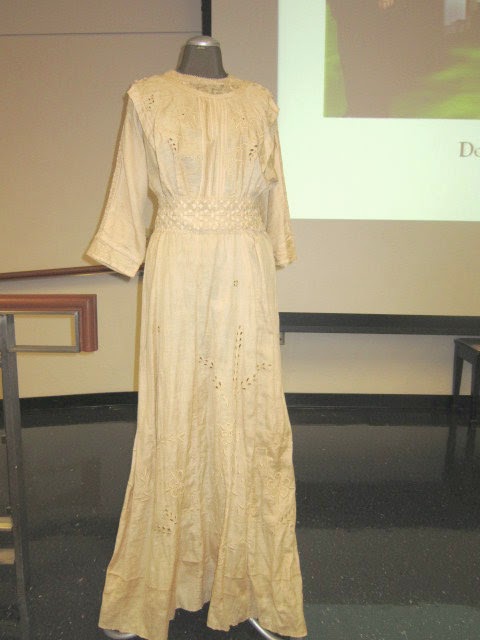 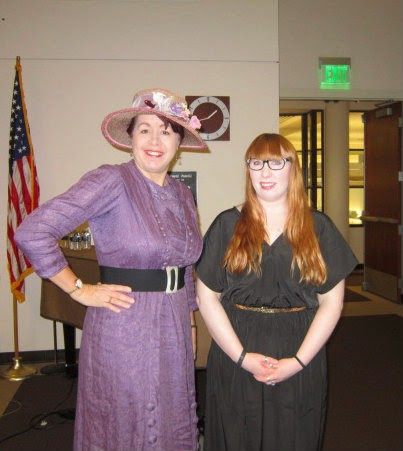 ~ The big screen was ready for the PowerPoint presentation ~ 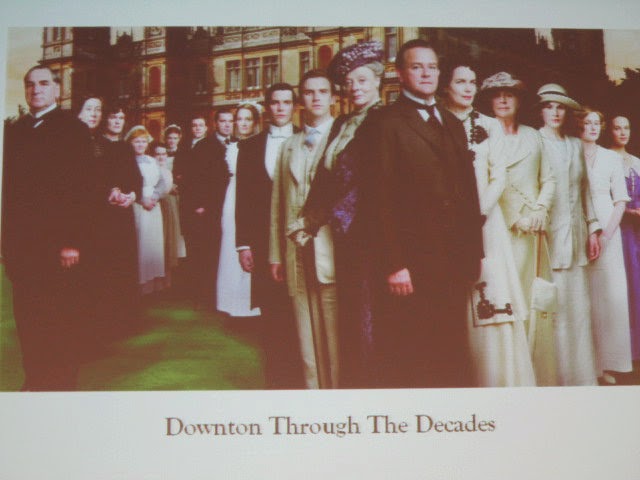 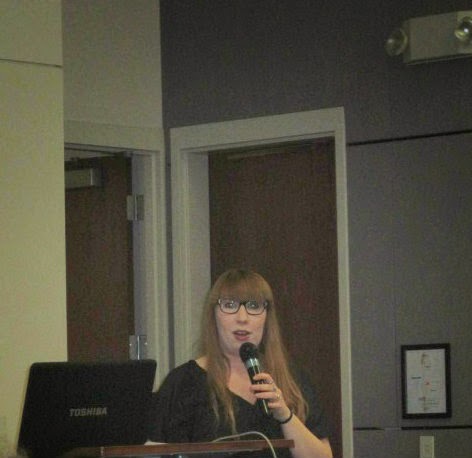 ~ Lynn was excellent.  She was dressed in an authentic Edwardian walking suit and hat. ~ 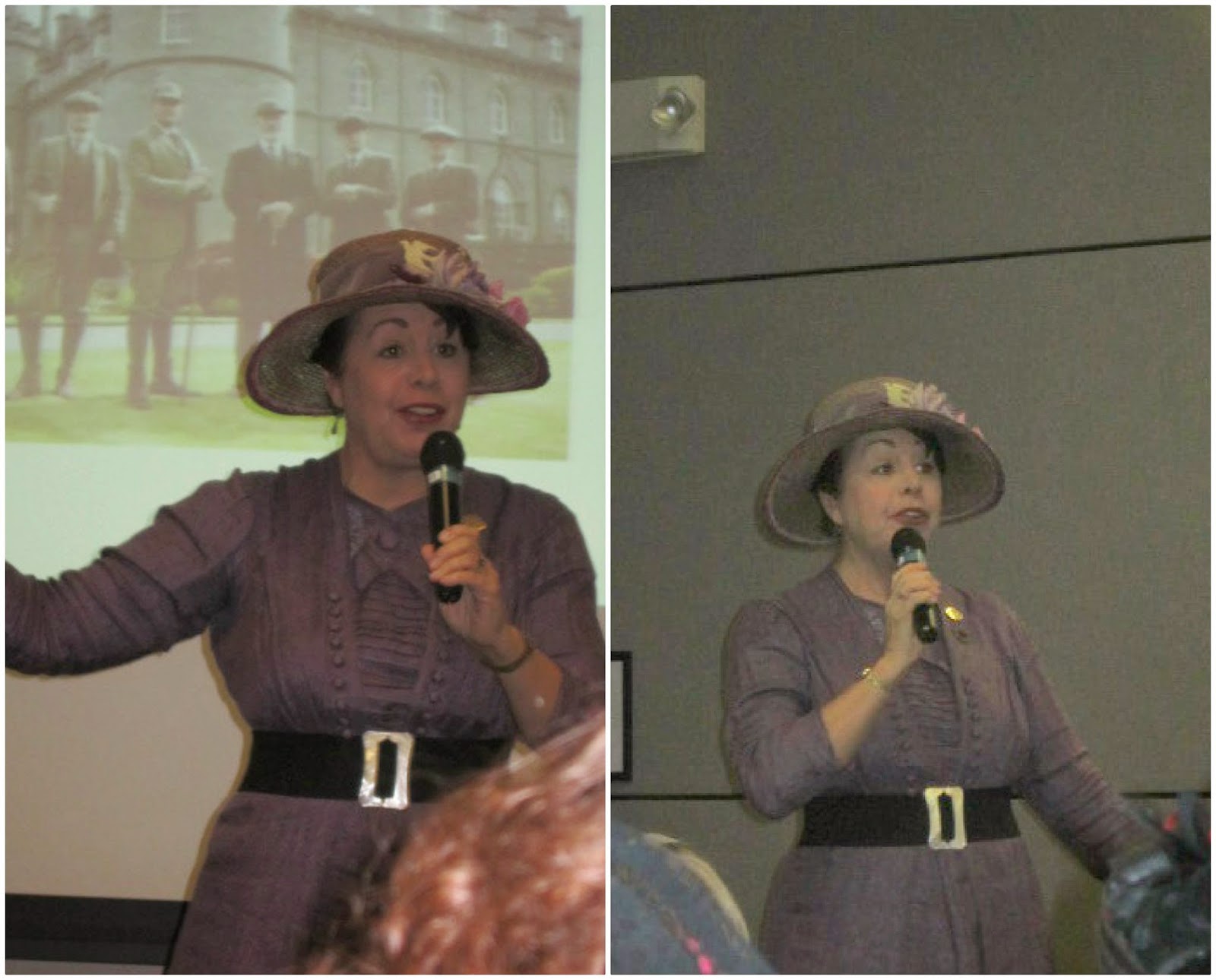 ~ In addition to PowerPoint, there were live models [Lynn's business partners] ~ 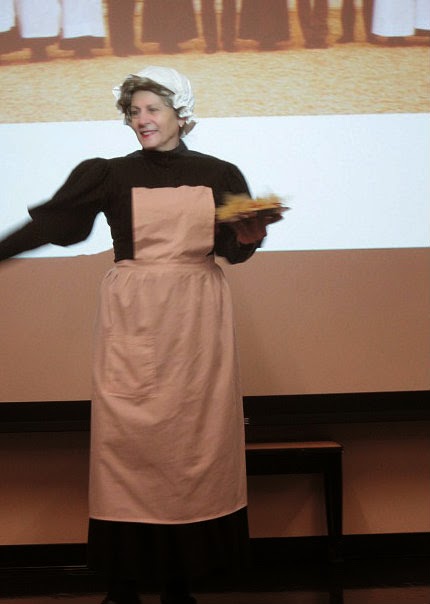 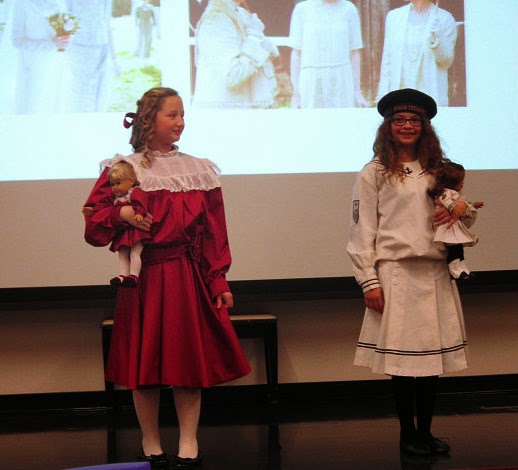 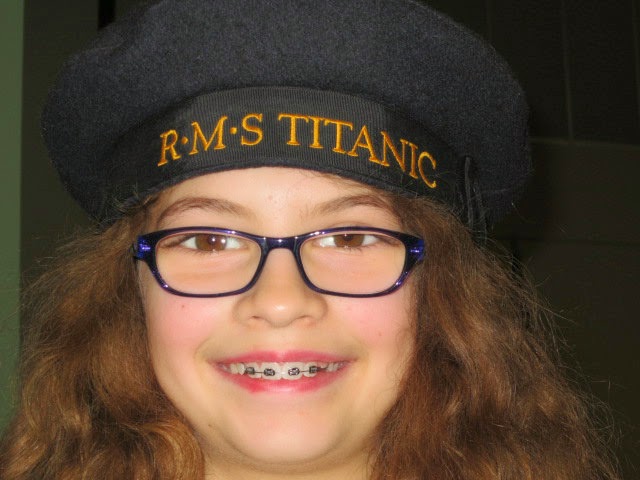 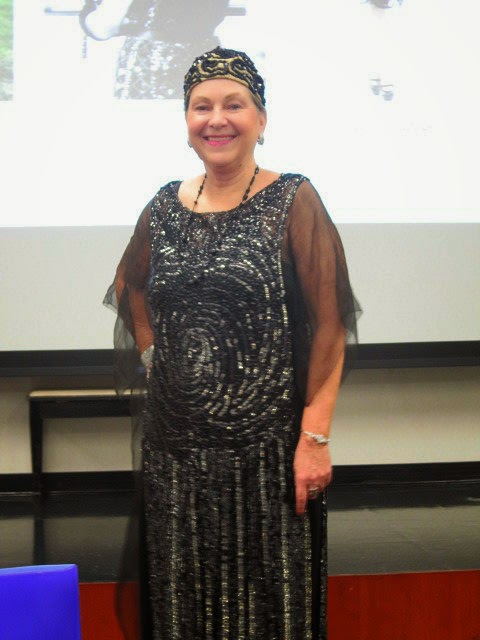 Victoria [on the right below] was modeling a "Piano Shawl" ensemble.  Lynn said in the 1920's women literally wore piano shawls that had been designed to adorn pianos.  I have one of the repro garments, but I didn't know it was called a piano shawl until yesterday. Live and learn! 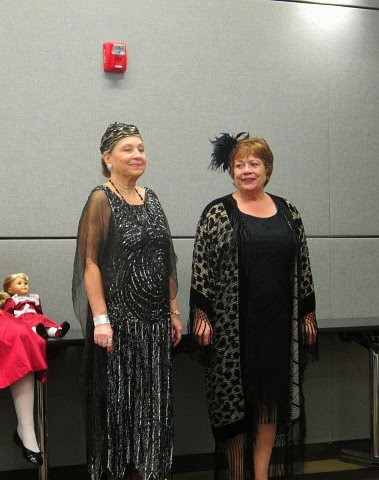 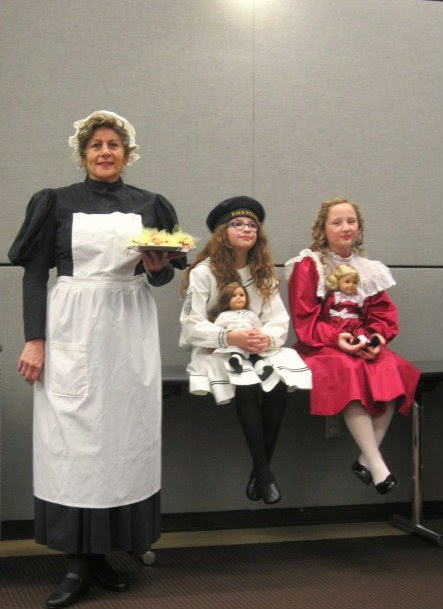 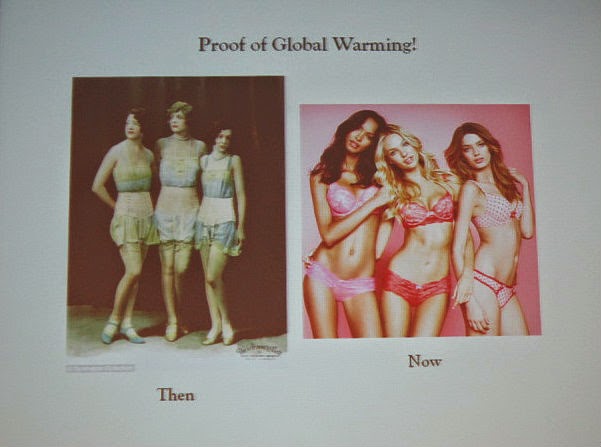 The program was over before 4:00 o'clock, and what a delightful afternoon.  I'm so glad I was able to attend. 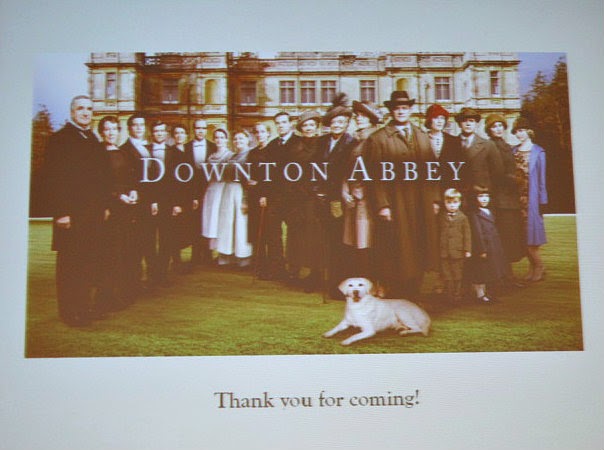 Lynn told us that the Smithsonian channel was airing a new series called, Million Dollar American Princesses last night at 8:00 p.m., preceding  the airing of  season V's  episode I of Downton Abbey.  It was a very informative program hosted by Elizabeth McGovern who plays Lady Cora Grantham, and is about the real women behind the creation of her role - American women who married British aristocrats trading "cash for class."

When episode 1 ended, I watched the 1 hour documentary of The Manners of Downton Abbey, which pertained to both upstairs and downstairs residents. It was hosted by Downton historian, Alastair Bruce and was very interesting.

It was definitely a Downton Abbey kind of a day!  Did you tune in to Season V, Episode 1?