Every so often I like to blog about some of Michigan's "jewels" that I've visited, and today's post is about the Kellogg family summer mansion. 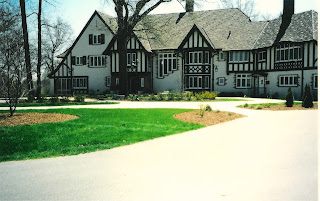 W.K. Kellogg [aka "Corn Flakes King"], selected the highest point overlooking Gull Lake in Southwestern Michigan as the site for his family's summer residence.  The Tudor mansion, which was completed in 1926, sits on 32 acres of what was once an eroded cornfield.  Its official address is Hickory Corners, MI between Battle Creek and Kalamazoo.

Kellogg grew up in Battle Creek, as a staunch Seventh-Day Adventist advocating health by fresh air, sunshine, exercise, and vegetarianism.  His older brother was a physician at the Western Health Reform Institute, and developed it into the Battle Creek Sanitarium ["The San"], which was at one time a world-famous health resort/spa that attracted the wealthy.

The younger Kellogg was hired by his brother in 1880 to, among other things, develop and test new health products.  Kellogg worked in the sanitarium kitchen researching substitutes for bread.  One day, in a failed attempt at making granola, he discovered the process of making wheat flakes. Experimenting further, he flaked corn and created the recipe for corn flakes.

In 1906 W.K. Kellogg founded his company, the Toasted Corn Flake Company of Battle Creek [later Kellogg Company] with 44 employees.  Kellogg cereals have been an American breakfast food for 107 years, and are now eaten in 180 countries. Tony the Tiger has been roaring "They're greaaaaaaaaaat!" since 1951, and Battle Creek has become known as the "Cereal Capital of the World."  I toured the factory in the early 1960's.

The Kellogg family enjoyed the 6,000 sq. foot home [with 6 bedrooms and 7 bathrooms] in the summers until 1942 when Mr. & Mrs. Kellogg vacated to allow the Coast Guard to use it as an induction and training center.  As the war came to a close the house transitioned to a rehabilitation center for wounded servicemen run by Percy Jones Army Hospital.

After Mr. Kellogg's death in 1951 the estate was gifted to Michigan State University.  With a  grant from the Kellogg Foundation, the Tudor mansion was restored to its original grandeur in 2000, and events and tours are now conducted there.

The manor house is about a 2 1/2 drive from where I live.  My mother and I attended one of their Tuesday Teas and toured the mansion in April, 2002. The house was registered as a Michigan Historic Site in 1990 and the marker was erected in 1991.  That's my mom standing next to the marker. 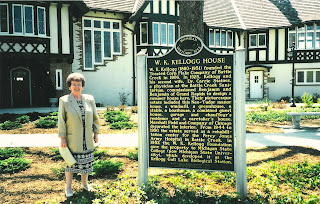 Tables for the 3:00 p.m. buffet tea were set up in the living room. 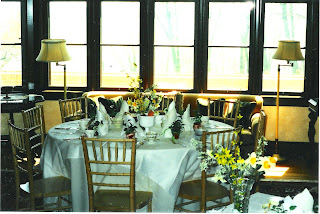 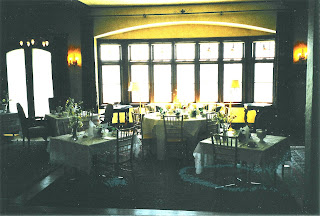 My mom and me in front of the living room fireplace. 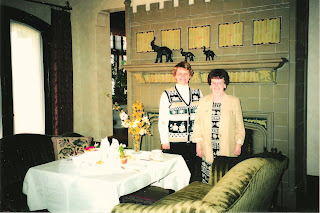 As you can see, the tables were covered with white linen cloths.  The china teacups were mix and match with vintage plates.  Each table had a milk glass container filled with tea bags to choose from, while servers filled individual teapots with hot water.  Fresh flowers [daffodils and forsythia] in crystal vases decorated each table. 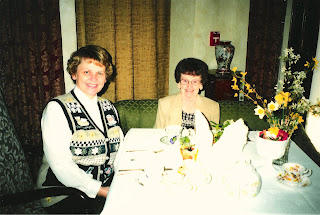 The buffet table was set up in the dining room.  L-R:  a round loaf of pumpernickel bread cut in half and made sandwich style with sliced turkey, thin slices of tomatoes and water cress. It was cut like wedges of cake; a round loaf of sour dough bread prepared the same way; a crystal bowl of strawberries on a bed of greens; and a plate of miniature carrots. 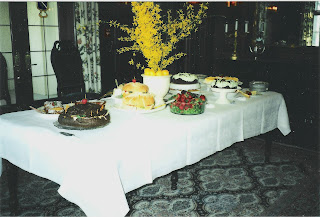 Continuing on the other side of the table:  Mushroom quiche wedges;  plate of Pink sugar cookies; Currant scones with Devonshire cream;  Orange spice tea cake; Creme de menthe chocolate cake; and Lemon Cake.  Everything was delicious.  The price was $18 per person. 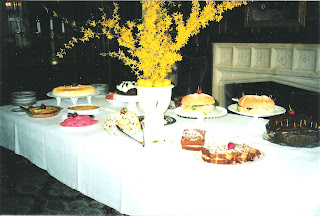 Attendees were given a pansy plant in terra-cotta pots, tied with decorative bows as a favor to take home. 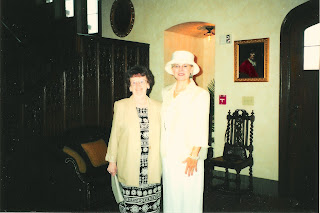 [Tour guide and my mom]

There's a bit of irony about teas being conducted in the mansion because Mr. Kellogg's religion disapproved of drinking tea.  However, with 21st century research extolling tea's healthful benefits, he'd probably approve if he were alive today!