June 11-12 2011, The Amherst Rose Tea Room in Massillon, Ohio hosted another superb event with British tea historian and specialist, Jane Pettigrew.   Not wanting to miss an opportunity to be educated by Jane,  my girlfriends and I made a return visit to North East Ohio.


The Saturday event opened with a five course Afternoon Tea, followed by Jane's presentation, "A Social History of Tea."  [The title of one of her books.]  Jane began with tea's discovery in China centuries ago;  how it was introduced and evolved in Britain; tea's history in the United States; concluding with  tea's growing appeal and trends today.   Jane stated that tea is a "magical drink" because it has the properties to stimulate and relax simultaneously, it's full of health benefits, and most important is its ability to bring people together.  Jane's passion for tea is so engaging that even someone who thought they disliked it would be pursuaded to like it!  I could listen to her teach/lecture for hours.  She is my all-time favorite tea educator/speaker. 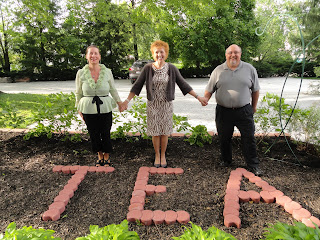 L-R:  Mary Jane Corwin [Tea Room Owner]; Jane Pettigrew; and Carl Corwin [Mary Jane's Husband & Tea Room Owner].  The photo was taken in one of the gardens that surrounds the beautiful 1846 Victorian house where the tea room is located. 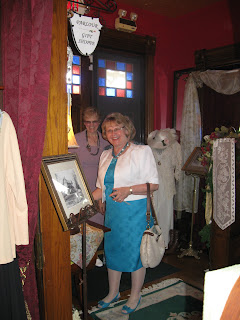 Me arriving at the event. 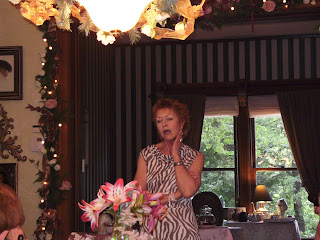 The second day we returned to Amherst Rose for a tea buffet followed by a tea tasting.  We began with a Camellia Joy white "flowering"  peach flavored tea.   The second tea was a Huang Shan Mao Feng green tea.  The third was Dong Ding oolong - Jane used this tea to show the attendees how to properly brew a pot of tea.  The fourth tea was a First Flush Charleston Plantation black tea [U.S. grown].   We concluded with a Tregothnan English classic estate tea.  The estate, located in England, began growing tea in 2005.  This tea was a tribute to Jane, since England is her homeland.

Following the tasting, author and tea educator, Eve Hill [of Cleveland, Ohio], brought a selection of her teapots to view.    I was intrigued by the size of the early teapots.  Since tea was so expensive in its early days, it was served in very small teapots closely resembling a child's teapot.   Those being served only received a few drops, so they really had to savor it! 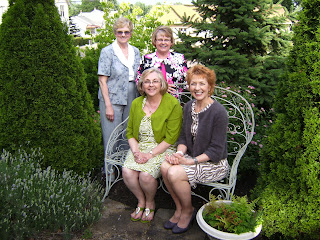 
When the event was over, Mary Jane graciously invited us back that evening for an informal gathering that turned out to be one of the highlights of the weekend!


Upon our return, the long dining table that had seated 14 guests earlier in the day was folded up and moved into the library, and the long area rug was rolled up exposing the oak hardwood floor that soon transitioned into a ballroom dance floor! 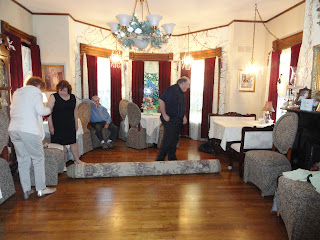 Rolling up the carpet.

Who would have known that Jane, Mary Jane and Carl were excellent ballroom  dancers.   It was a side of them we had never seen before and they were absolutely amazing!  Tea pairs well with everything - including dancing!   Tea dances were [and still are at the London Waldorf] very popular. 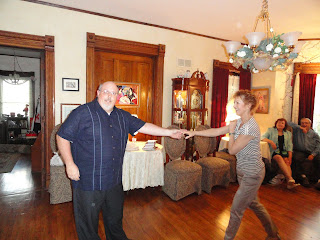 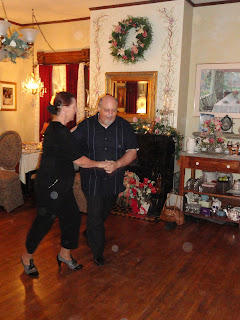 Posted by relevanttealeaf at 6:50 PM