My cousins, Vickie and Kaye, planned great activities to make our time together fun and memorable.   On Friday, July 13th, we traveled to the quaint town of Collierville, TN. a suburb of Memphis, in Shelby County. 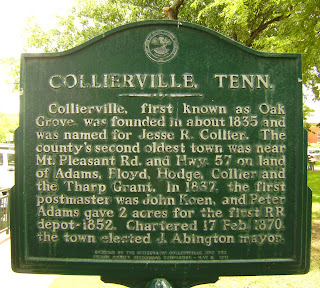 A bit of research revealed:  In 1836, Jesse R. Collier advertised in the Memphis Enquirer, "The town of Collier for sale."  His ad marked the beginning of the town's growth.  In 1851 Collierville was a stagecoach stop.  In 1852 the Memphis-Charleston Railroad opened.  In 1863 the Battle of Collierville [one of the bloodiest Civil War battles in Shelby County] took place.  Collierville's location on the rail line placed it in the midst of several Civil War battles [ten in all], and the original town was burned to the ground and many lives were lost.  In 1872 Collierville's Town Square was established, which was the location of our lunch stop at  The Silver Caboose. 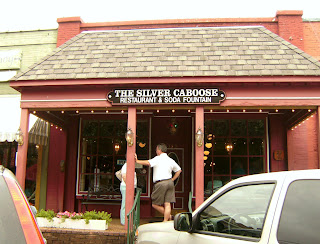 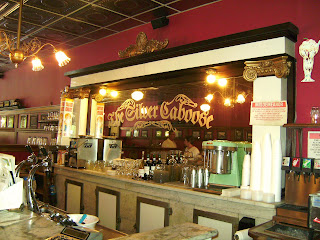 I quickly concluded that Sweet Tea [a highly sweetened iced tea] is served by copious glassfuls in Tennessee.  I ordered the Silver Caboose "Hamburger All the Way" [smothered with sauteed onions, mushrooms, cheese and bacon].  Yummy!  Another thing I noticed is "vegetable plates" are offered on most Tennessee restaurant menus.  [In Michigan I've only seen them on Cracker Barrel menus.]

We were all too full to order individual desserts so Vickie ordered two "tasting" desserts that we passed around:  Hot Fudge Pecan Ball [vanilla ice cream rolled in pecans and covered with rich hot fudge] and Strawberry Short Cake.

Following lunch we went in all the little shops on the town square.

From there we drove the short distance to Sheffield's Antique Mall - the largest antique mall in the mid-south.  The building comprises 72,000 sq. feet and has over 300 dealers.   I saw lots of  "treasures," but my flight home with an already full suitcase, left little room for  purchases. 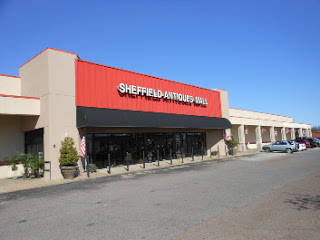 After antiquing, we drove back to Vickie's house for what was to become a wonderful  ritual for three afternoons.   Kaye ordered the Anne of Green Gables trilogy collection for us to watch together.  [I will definitely be ordering a set of my own.] 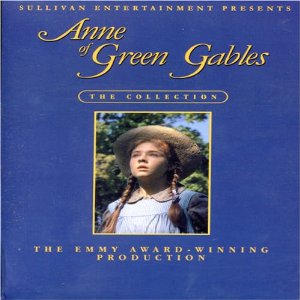 While I knew the book existed, I  somehow went through school [and adulthood] without ever reading it or seeing the movie, but I knew I was in for a treat with these DVD's since three days prior to my trip, several bloggers featured an Anne of Green Gables tea on their blogs.   If you are an Anne of Green Gables fan, you must read the July 9th posts at the following blogs [if you haven't already done it].

We were all captivated by the Anne of Green Gables movie [the first in the trilogy], and were moved to laughter or tears depending on the scene.

Since returning home, I've pulled from my bookshelf the Anne of Green Gables  Reader's Digest edition that I  purchased at an outdoor flea market last summer, and have begun reading it - better late than never!   I noticed the first publication of Lucy Maud Montgomery's enduring book was 1908.  I smiled as I read Marilla's comment to  Rachel Lynde in chapter one, that they were adopting a boy because Matthew was getting up in years, [60] and he wasn't as spry as he once was!   I'm thankful most sixty year olds in the twenty-first century reach that milestone without being too decrepit!  ;-) 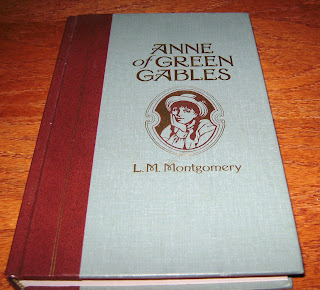 I have moved Prince Edward Island to the top of my "bucket list" of places to visit!