My interest is always piqued by anything pertaining to the J.L. Hudson store, so when Hudson historian and author, Mike Hauser, told me the Junior League of Detroit's 2012 Designers' Show House was going to be the Oscar Webber Mansion [nephew of J.L. Hudson and General Manager and Vice-President of the J.L. Hudson Store], I wrote the touring dates on my calendar. 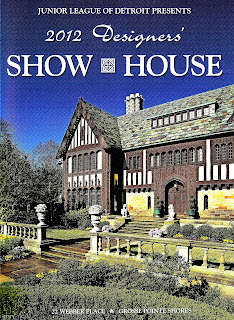 I'm grateful for girlfriends who are always eager to to participate in my adventures, so last Thursday, May 17th, Lori and I set out for 22 Webber Place, in Grosse Pointe Shores, MI. We arrived at noon, and parked cars lined Lakeshore Dr. and Webber Place, by people not only eager to see the latest home design trends, but more importantly - for us anyway - the hand craftsmanship and character of this 1920's home. The fact that it was owned by J.L. Hudson's nephew was a bonus! It was a beautiful day, so we didn't mind parking a distance and walking to the mansion. 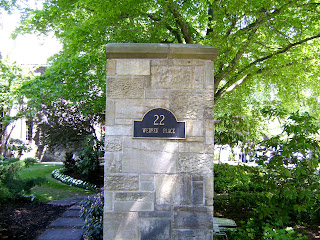 Construction began in June 1925, and the family [Oscar, wife, Marjorie, daughter, Peggy, and father-in-law, John E. Lambert] moved in during the summer of 1927. Originally it was built on a 40-acre tract of land on Lake Shore Dr., but the acreage has been subdivided now.  An Internet article stated it cost Mr. Webber $476,079.00 to build the mansion.   I wondered how many rooms in his new home were decorated and furnished with items available at the grand J.L. Hudson's department store?

Below is the south side of the house visible from the street. Those beautiful lower level, leaded cathedral windows provide sunlight to the living room. The exterior of the house is sandstone with a slate roof. 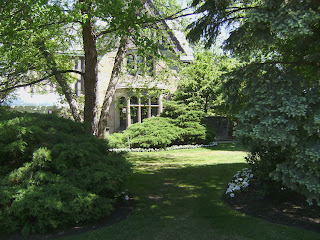 Front, south-east corner of the house. 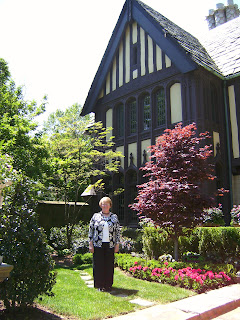 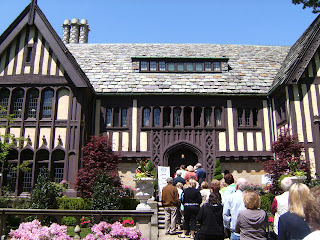 Oscar Webber probably never imagined that 85 years after building his beautiful English Tudor home, a long line of people would be eagerly waiting to tour it [actually for the second time because it was a Detroit Junior League Designer's Show House in 1994 too].


One of the tour guides said the architect, Leonard B. Willeke, designed many churches and some of those characteristics are evident in the homes he designed [windows, woodwork, doors, etc.].

Architectural details: The mansion is 10,304 square feet. It has three stories and a basement. The small row of windows on the roof line is the Grand Ballroom [which was called the Great Room on the tour].  Before makeover photos showed the current owners used it as an exercise/workout room. The house has seven bedrooms, 11 Pewabic tile bathrooms, six Pewabic tile fireplaces, and intricate, hand-carved wood and plaster throughout. The first floor has a "morning room" [located next to the living room], a formal dining room, library, butler's pantry, kitchen and breakfast room. Pocket doors, built-in bookcases in the library, and a built-in dining room sideboard are still intact from the original construction.

Mr. Webber moved out of the house in 1946 after his wife passed away, and his daughter married.  An Internet search revealed the house was once available to rent for $1,000 a night. Now wouldn't that be a fun place to stay! I wonder how many people availed themselves of that luxurious opportunity.   The house is currently for sale.

No photography was allowed inside the house, but designer Margaret Mcavoy, of Mcavoy and Daughters, posted several "before" photos on her website.   Take a peek!   An Internet search will also provide interior photos of some of the rooms that received designer makeovers for the Junior League house tour.


Below is the north side of the house where the staff resided. Notice the unique chimney pots. 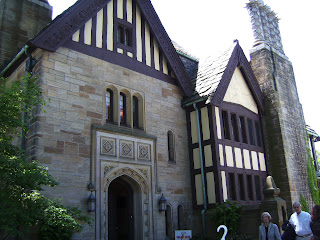 Back [west] side of the house. 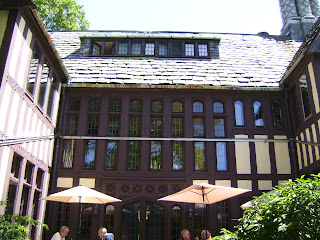 The Terrace Café was established to serve touring guests coffee, tea, sandwiches and baked goods following the house tour if they desired.   Lori and I didn't go to the café, and I thought afterwards we missed our opportunity to say we dined at the Webber mansion!  ;-) 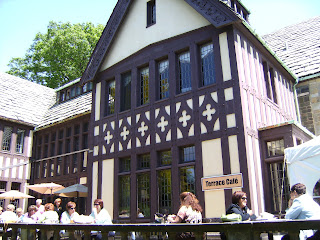 The grounds and gardens were lovely - lots of fountains. 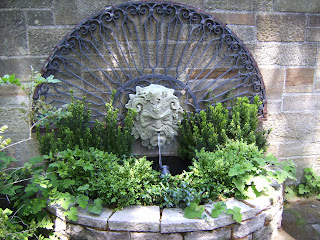 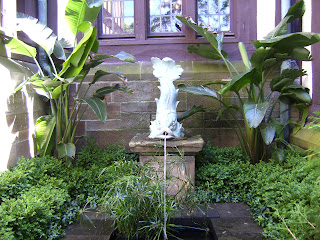 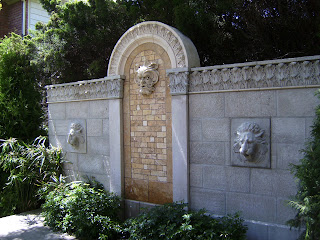 Below is the gate that leads back to the front of the house. 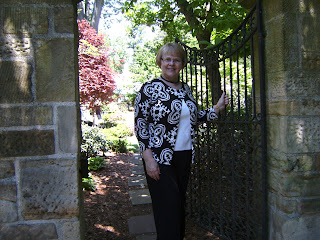 Several of the designers had tea vignettes in their areas. When we entered the kitchen area I noticed a display tray of tea bags packaged by Keep Calm Drinks. It appears the business is located in the U.K., but I've e-mailed them and if I'm able to acquire the teabags locally I'll be sure to post details. Their website shows they have Diamond Jubilee commemorative tea bags too. 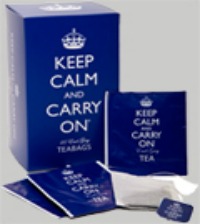 What a fun afternoon.  Thank you to all the designers and the Junior League of Detroit!