I joined a tea-themed e-group, Afternoon Tea Across America [ATAA] in 2003, and blogger Linda J., of Friendship Tea, joined a year later.  That's where we first  became acquainted.  A  friendship evolved in 2007 when we  both went on the same Tea in London [England] Tour.

With Linda's tourism and travel planning background, she mentioned in September 2011 how much fun  a "tea trip"  would be.   We had both been communicating with blogger, Angela McRae of Tea with Friends, who was enthusiastic about a meet-up, so we began discussing suitable locations.  In January 2012 we settled on the destination of Asheville, North Carolina, and Linda started making arrangements.

Digressing for a moment I must say that my blog exists today because of Linda's and Angela's encouragement to enter the world of blogging, and I'm very grateful for their  support.

Now back to the tea trip... I invited my long-time girlfriend to go on the trip with us, and Linda invited a good friend as well.  Sandy and I set-out last Monday morning [April 30] on our 400 mile journey to Linda's house in Kentucky.   The long awaited day of the trip had finally arrived.

Two teapot welcome flags greeted us as we pulled into Linda's driveway, and her  very hospitable and accommodating "almost" 13 year old son served us a glass of mango iced tea once inside their lovely home. 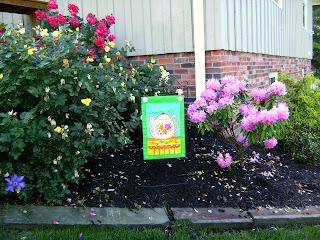 Shortly after arriving the family took us to dinner at the historic Boone Tavern Restaurant of Berea College. 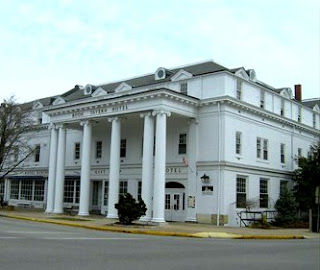 The  tavern/hotel is located on the college square, and the restaurant is situated inside the hotel.  The building was built in 1909 at the suggestion of the college president's wife after she housed 300 guests in her home one summer!  It is named after the Appalachian explorer, Daniel Boone. 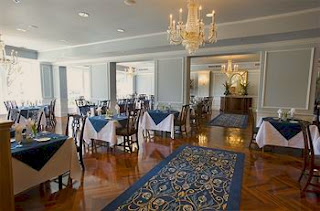 Linda and her hubby, GJ, and son, AJ. 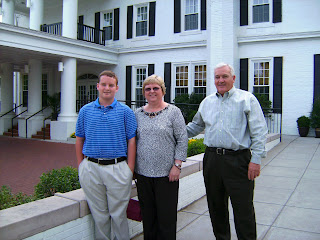 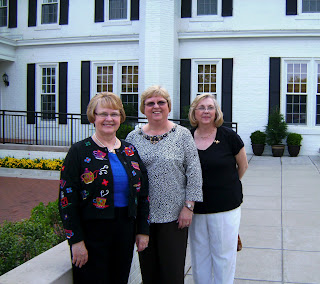 Our meal began with one of the restaurant's most famous offerings - spoon bread.  Yum!  A fried green tomato salad was on the menu, and since I had never eaten a fried green tomato, Linda said it was a "must try."   They were very good!

April 30 - May 5th was Derby Week in Kentucky.  Derby Pie is a registered trademark of Kern's Kitchen in Louisville, but that hasn't stopped other pastry chefs from attempting to recreate the pie under another name.   At Boone Tavern Restaurant it goes by the name of "Race Day Pie."   Linda said this was another "must try" and it was scrumptious!   I've already  searched the Internet for a recipe since I've returned home. 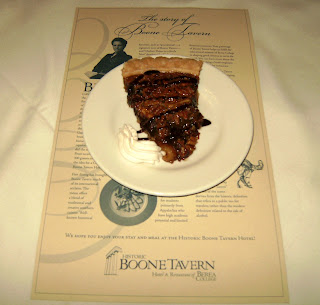 After dinner we returned to Linda's house to  chat and get caught-up on each other's news,  then we went to their guest room for the night.  It is a tea-lover's delight!   The entire room is tea-themed right down to the teapot sheets and pillow cases and teapot quilt!  Linda is definitely "the hostess with the mostess."  She placed a gift bag for each of us in the bedroom, which amongst other things contained a journal to record the details of our trip. 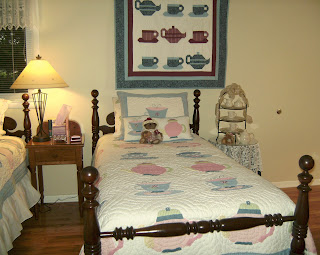 We would rise early the next morning so we could get to Asheville by early afternoon for our first tea reservation and meet-up with Angela and another blogger, Lynn of Frivolitea.