Victoria is a very accessible city, and we  rode the bus, taxied,  or walked almost everywhere during our stay.  There was no need for a rental car.  One of our places for lunch was St. James Bay Tea Room - very quaint and informal. 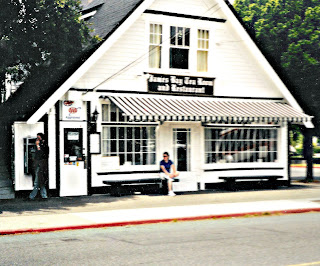 British Memorabilia/Decor Inside the Tea Room 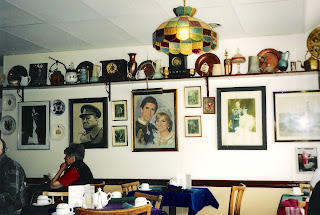 We visited Murchie's Tea and Coffee Shop on Government Street, who  supplied the Empress Hotel with their Signature Afternoon Tea Blend from 1972 to 2001, until the hotel was sold to Fairmont Hotels.   Metropolitan Tea is their current supplier. 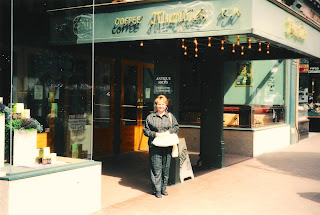 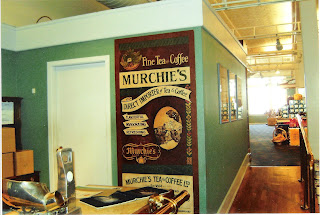 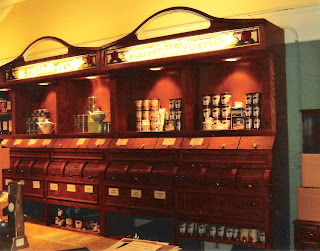 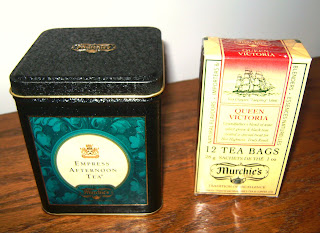 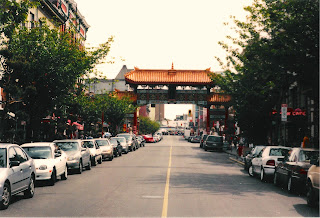 And ordered a "show stopper" Bubble Tea at the Panacea Bubble Tea Bar.   It was an almond/coconut flavor, and very good. 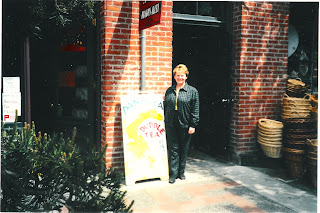 We took a ferry to Point Ellice House.  We toured the house and had Afternoon Tea in the tea area of the gift shop. 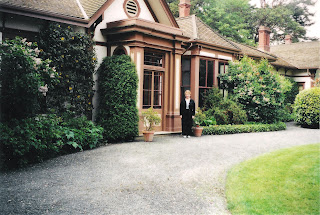 Phyllis [on the right] ran the tea room and gift shop 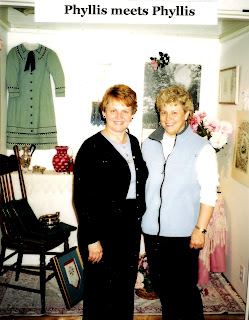 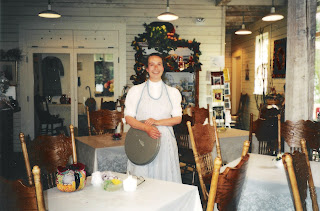 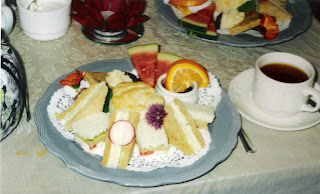 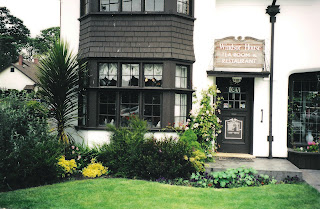 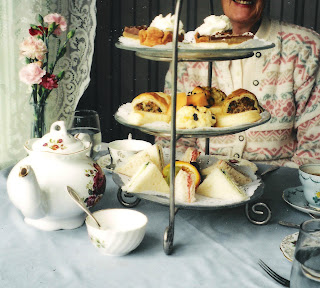 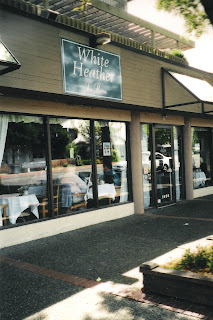 The "Not So Wee" Tea Plate as it was called on the menu.  Tea was the house special - "Balmoral" loose tea.   [The owner was from Scotland.] 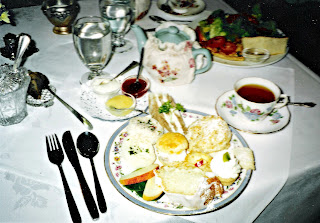 In addition to Murchie's, we visited Special Teas and Silk Roads tea companies. 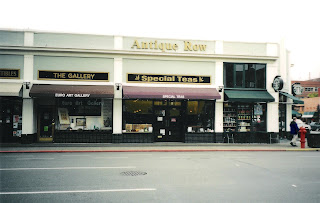 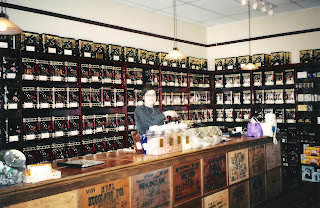 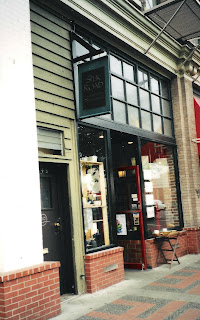 And had our picture taken by an antique photographer on Wharf Street! 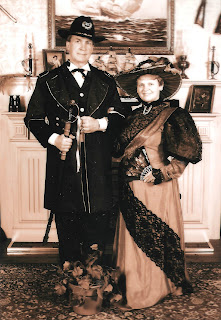 We stayed at "The Grande Old Lady" - The Empress - on our last night in Victoria.  The 520 room hotel was built in 1908 by the Canadian Pacific Railway.   The Empress is the pride of Victoria.  It's what Big Ben is to London, or the Eiffel Tower to Paris - a historic landmark and a distinctive symbol.  Some have even said the Empress is Victoria!   In 1987 a $45 million dollar renovation began to restore the hotel to its original splendour.  The 'Royal Renovation'  was completed in 1989. 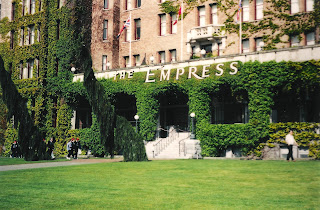 Our room was in the Upper Lobby area, #308  with a beautiful bay view. 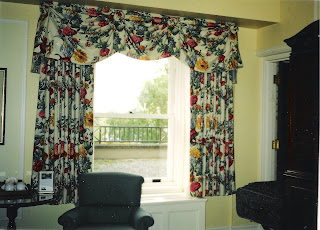 I purchased the book, The Empress Hotel - In the Grand Style,  written in 1997.  The hotel's history is fascinating, and the book includes many references to tea.   The author stated in one chapter, "The Empress turned fifty without fanfare but with 'tea as usual'."   A 1960's renovation was dubbed "Operation Teacup." 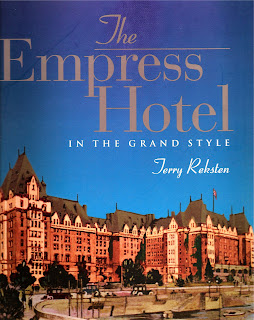 We went on a 70-minute guided tour of the hotel.    One of the floors is said to be haunted - glad my room wasn't on that floor!  The lady in the center of the photo below was our tour guide, and when I returned again in 2008 she was still there. 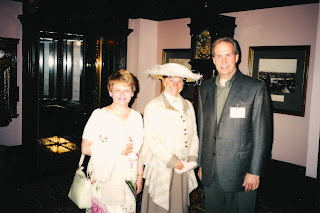 After the tour we had reservations for Afternoon Tea.   Since the hotel opened, they've  served Afternoon Tea  to Royalty, Prime Ministers, Presidents, Dignitaries, Celebrities... and my hubby and me! ;-)   Tea is served in more than one dining area of the hotel, but the 'must do'  is in their beautiful Victorian Tea Lobby. 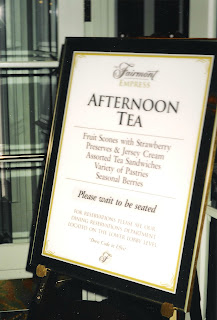 As we sat in the beautiful Tea Lobby with portraits of King George V and Queen Mary looking down on our tea experience [they have been hanging in that same place since the hotel opened],  I found myself wishing the walls could talk!   Imagine what they could say about all the people sipping tea over the last 100 [plus] years!   Maybe it's good they can't talk. English novelist, Henry Fielding once said, "Love and scandal are the best sweetners of tea!"  ;-) 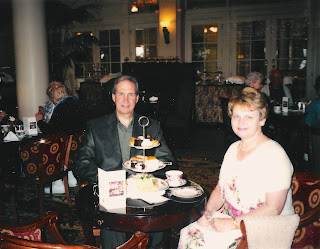 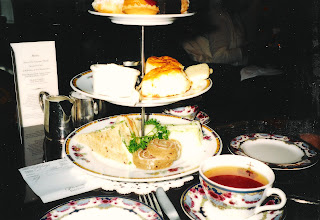 Pictured below is a "trio" [teacup, saucer and luncheon plate] of the Empress 'Royal China.'  It was produced and presented to King George V and his wife, Queen Mary, in 1914 upon the opening of the Booth China Factory in England.  Later, the china found its way to Victoria, and graced the tables of the Empress when the King George VI and Queen Elizabeth came to visit in 1939.  It was carefully stored away and didn't appear again until 1951 when Princess Elizabeth visited.  Eventually most of the china was either lost or broken.  Fortunately pieces of the original china were re-discovered in 1995 in an antique shop in Victoria, and the 'Royal China' pattern was meticulously duplicated by Royal Doulton [who purchased the Booth factory].  It has been gracing the table settings of the Empress Tea Room since Victoria Day weekend, 1998.  It  is sold in the hotel's gift shop, and I purchased the cup and saucer on my 2003 visit and the luncheon plate in 2008. 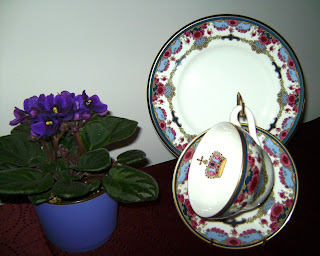 We took the double-decker bus tour of Victoria, a 30-minute tour of the beautiful Parliment Building, toured Craigdarroch Castle, the Emily Carr House [Victoria's artist and author], Madame Tussaud's Royal London Wax Museum, saw a movie at the National Geographic IMAX theatre,  and shopped on Antique Row [Fort Street] and downtown.  There's lots of  shopping opportunities in Victoria.   While it probably seems like we went to every establishment that served Afternoon Tea [eight Afternoon Teas in seven days!], we didn't!  I have brochures of more tea places for future reference.  No two tea rooms were the same, but all were patronized by men and women.

There is so much to see and do in Victoria.    I used eight rolls of film [pre-digital camera days], and I wish I had space to share all the photos with you.   It's been great fun re-reading my travel journal for this post.  I hope you've enjoyed the "arm chair" tour.