The library of St. Clair Shores, MI sponsored a program Monday evening entitled, "Memories of Hudson's."  The presenter was Detroit's foremost historian on the J.L. Hudson Department Store, Mr. Mike Hauser.   The date's been on my calendar for weeks, and my hubby and I were in the audience.  I don't know the seating capacity of the room, but it was full with people ages fifty-something and up.  The younger generations don't remember the flagship store, so seemingly have no interest. 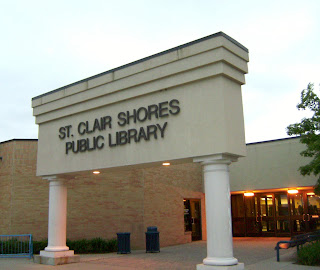 Below is Mr. Hauser.  He is, indeed, a wealth of information pertaining to Hudson's.   His presentation included  a display of Hudson memorabilia - photos and items from the store; three short [5 minute]  Hudson DVD's; an informative lecture; concluded by a question and answer period.   The time flew by, and an hour and a half [7:00 - 8:30 p.m.] hardly seemed adequate.  But as they say, it's always better to stop while people are still wanting more!

Target Corporation holds the J.L. Hudson archives.  At one time they provided a  display of Hudson's memorabilia at Macy's Somerset Mall store.  Then the display was moved to Macy's Oakland Mall store, and after being shuffled from place to place in the store,  the decision was made to send it back to Target Headquarters in Minneapolis, Minnesota.  Regrettably, I never knew the display existed at either store. 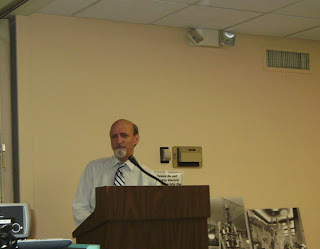 The audience gathered around Mr. Hauser to talk to him informally after the lecture. 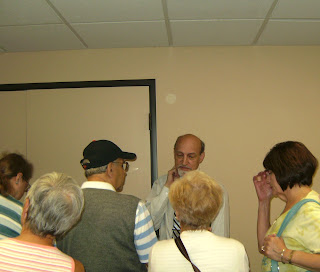 The lady in the photo below is Sandy H. - a former Hudson's employee of 44 years.   She's showing Mr. Hauser her 25th anniversary booklet. 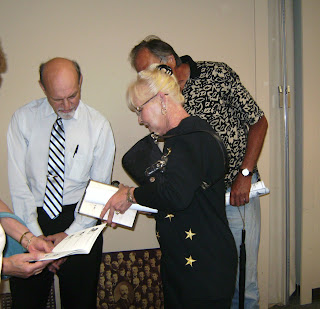 The round zippered case on the floor was issued to her by Hudson's for use  in one of the departments she worked.  Her Hudson's employee I.D. was glued to the inside pocket of the lid.  She carried her Hudson memorabilia in it Monday night, and my hubby took a photo of it. 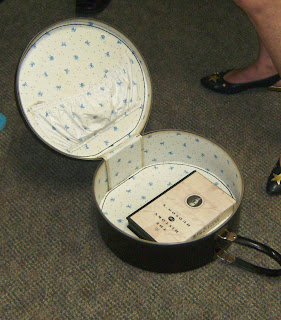 What immediately caught my attention was  the video inside the zippered case.  It was produced in 1992, and I blogged about seeing the video at the Detroit Historical Museum here.   "25 Year Club" is printed on the side of the video case.   Employees who achieved 25 years of service during the 1992 time period were given this commemorative video as a keepsake. 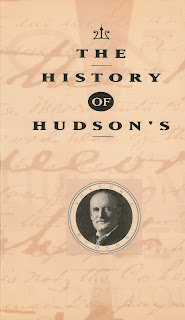 I've searched Etsy and E-bay for the video to no avail.  So I mustered up my courage and asked Sandy if she would be interested in having the video copied for me and I'd gladly compensate her.  To my surprise [and delight] she said, "Do you want it?  I don't have a VHS player, so you can have it."  I was one elated lady!


Sandy and me, with her round Hudson's case. 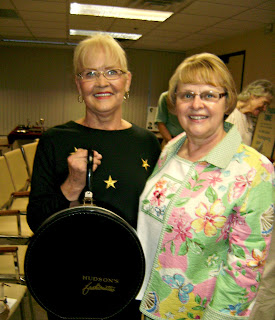 I had the pleasure of meeting Mr. Hauser earlier this year over a Hudson's Maurice Salad in a Macy's restaurant.   He's been so kind to share his Hudson's knowledge and expertise with me for my magazine article, and the recent Hudson's presentation I did for the Ladies' Spring Tea at church.  And he generously gave me some pieces of much sought after Hudson's flatware that was most likely used in Hudson's Mezzanine Tea Room.

Early on I asked him if he was a tea drinker and he confessed to being a coke-aholic.  I had some Harney & Son's Earl Grey tea sent to him in hopes of winning him over to the pleasures of tea.   He told me he drank some of it, and I noticed at the lecture he was drinking Snapple, so progress is in the making!  ;-)

Mr. Hauser and me 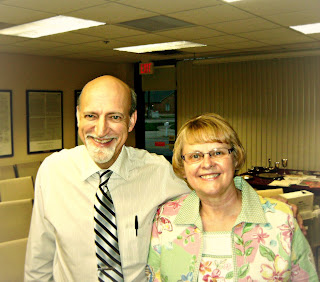 On an entirely different subject... when I blogged about touring the Webber Mansion  earlier this week I mentioned seeing teabags in a vignette from Keep Calm Drinks, blended and packed in the United Kingdom.   My tea and blogger friend, Angela, from Tea With Friends  told me she saw them at T.J. Maxx! 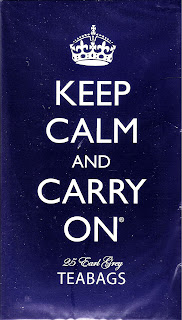 ﻿
I particularly liked the bit of history printed on the side of the box since the Keep Calm and Carry On posters and signs are so hugely popular right now:

"On the eve of World War II the British Government printed 2.5 million Keep Calm and Carry On posters.  The aim of this simple five word statement was to convey to the country a message of reassurance for the troubled times that lay ahead.  The posters went unused and subsequently destroyed at the end of the war.  Some 55 years later a second-hand book dealer in the North of England discovered a copy of the poster in a box of books bought at auction.  That find marked the rebirth and launch of the Keep Calm and Carry On message into the 21st Century."

So to borrow a quote from the legendary American radio broadcaster, Paul Harvey, "Now you know the rest of the story!"