A Fun Afternoon With My Cousins

My three cousins came for lunch yesterday and we had a great time.  A big snow storm was predicted for our area over the weekend, and when I lifted the bedroom shade Sunday morning it looked like the forecast would be accurate.  My cousins had to travel about 40 miles, so text messages began flying across cyberspace as to whether we should postpone the gathering. By Sunday afternoon the snow had stopped, and Sunday night they texted that they'd leave the date as planned.

They came bearing gifts of fresh flowers, Godiva chocolates and a teapot that belonged to their mother [my aunt] as a keepsake. 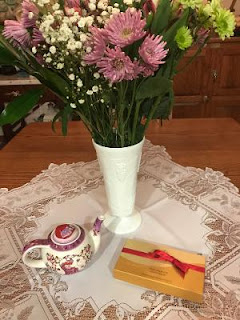 The tablescape stayed the same as last Saturday, only a little fuller since it was set for four instead of two. 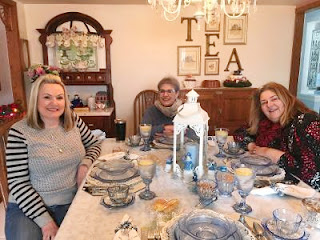 The menu was the same too with the exception of the dessert.  When I thought the luncheon was going to be postponed, my hubby and I had a slice of the Earl Grey tea cake so there was no longer enough to serve on Monday. ;-) Plan B was an Apple Spice Cake made in the crock pot which they enjoyed.  I told them the next time they come I'll use my new charcuterie board.
Sherry had a bit of a scare when her neighbor called and said an EMS truck was at her house. Her husband had just gotten out of the hospital and was home alone, so she called him.  He answered, and assured her he was fine.  Turns out EMS came to their house by mistake.  Her street was very similar in spelling to the one they were supposed to go to.  Yikes! 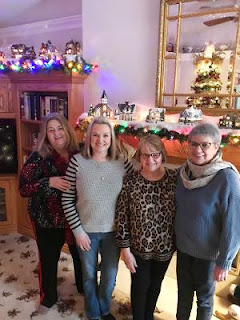 [Sherry, Tammy, Me and Cindy]
The March/April issue of Tea Time magazine arrived in today's mail.  It's their 100th issue and is 100 pages, an expansion that will continue with all upcoming issues.   I'm honored that an article I wrote appeared in their premier issue, but I'm sorry the tearoom is no longer there.  A lot has happened since 2003.  I have every issue of Tea Time and don't plan to part with any.
They have a fabulous trip to England planned in May, but with COVID and its mutations, I can't help wondering if this is the optimal time for traveling across the pond. 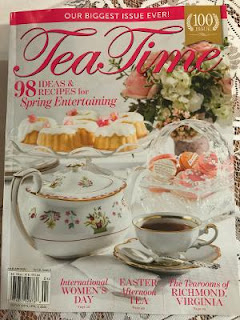 The Whitney reopens this Friday night.  I have a staff meeting tomorrow from noon until 5:00 and return to work to serve 'Mansion Tea' [the new name] on Saturday.  There will be two seatings now 11:00 a.m. and 1:30 p.m.  The special Valentine's Tea on Feb. 14th is sold out.
Punxsutawney Phil saw his shadow this morning, so there'll be six more weeks of winter. Living in Michigan that's no surprise, and it'll probably more than six weeks!

Posted by relevanttealeaf at 6:51 PM