Today is another celebration day in the month of February.  Take your pick as to what title your celebration will be called - Mardi Gras [which is French for Fat Tuesday], Paczki Day, Carnival Day, Shrove Tuesday or Pancake Day.

In Michigan we celebrate Fat Tuesday [the last day to indulge in rich fatty foods before Lenten sacrifices and fasting begins on Ash Wednesday] by enjoying a Polish pastry known as Paczek [singular] or Paczki [plural].  It's a fried doughnut that comes in a variety of fillings and is much richer and tastier than an ordinary doughnut, BUT, depending on the size, they can have as many as 400 calories and more than 20 grams of fat.  Yikes!

I watched a live demonstration this morning on how to make Paczki, and though a bit time consuming, they didn't look too difficult to make.  But my hubby brought two raspberry filled Paczki home from a bakery this morning so I didn't have to give any thought to making them. I did a photo shoot instead!  ;-)

According to the news, COVID-19, cold weather and a significant accumulation of snow didn't stop Michiganders from making their way to bakeries today to get their Paczki. 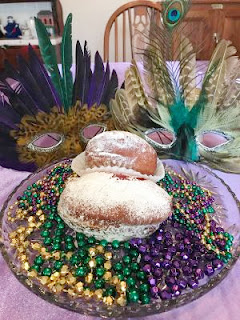 Shrove Tuesday is the last day of Shrovetide preceding the start of Lent.  In Old English the word means "to confess." [The repentance aspect of Lent.] In Great Britain, Christians prepared for Lent by making pancakes to deplete their stock of eggs, milk, butter and fat.  Hence the name Pancake Day instead of Shrove Tuesday.  They not only eat pancakes, but they have outdoor pancake races.

As the tradition spread through Europe it became Mardi Gras in France, where waffles and crepes are part of a lavish feast.

Mardi Gras is a day of revelry that includes parades and parties.  It marks the last day of the Carnival Season which is a six-week period of celebrating and partying. It dates back to ancient Roman festivals celebrating the Harvest Season.  European colonists brought the pre-Lenten festivities to America, and French settlers brought Mardi Gras to New Orleans.  The first recorded Mardi Gras parade in New Orleans was in 1837.  COVID-19 cancelled all the parades this year, so residents decorated the outside of their homes instead.  The King Cake is a tradition and symbol of Mardi Gras in New Orleans.

I've only tried making a King Cake once, and it turned out well but was a bit time consuming. 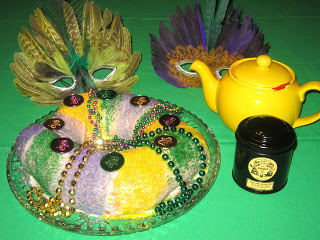 I watched a video today by Delish on a much easier version of the King Cake using Pillsbury Crescent Rolls.  I think I'm going to give that a try.

The King Arthur Flour website has a recipe for King Cake Scones that looks very appealing too. Will report back after I make them.  Wouldn't Mardi Gras be a fun theme for a tea party?  I have a folder of ideas, but haven't executed them yet. 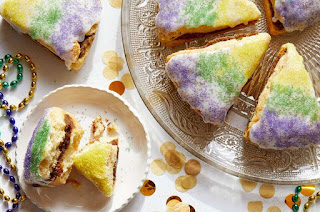 Posted by relevanttealeaf at 10:08 PM