I always say you meet the nicest people over tea, and today was no exception.  I invited the Executive Director of an Independent Living facility to my house for a tea luncheon.  Even though we had never met before, we were kindred spirits as soon as she stepped inside the front door.
Debbie is a tea lover and wants to incorporate Afternoon Tea in the activities for the residents at her facility. Talking about tea was something we both love and the time flew by.  She came at 1:00 o'clock and left shortly after 4:00 o'clock, and it was such a lovely afternoon.  I wish I would have taken a picture of her to share, but I'll make sure to do it the next time we get together.  It was fun sharing our tea journeys.  She grew up drinking tea because her parents are from Canada and it was an integral part of their family life.
Below are a few pics of my wintry tablescape and two of the food courses.  The table looks a little sparse when it's only set for two, but my three cousins are coming for lunch on Monday and I'm going to use the same tablescape and serve the same menu.  Why reinvent the wheel when this worked so well!  :-)  The tablescape will be more filled out then. 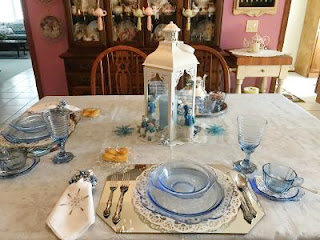 I used my Blue Madrid Depression Glass made by Federal Glass Co. 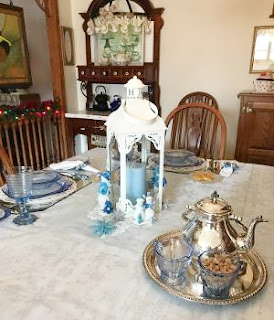 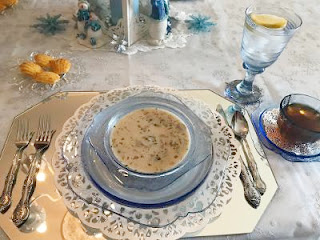 The main course was Ham, Broccoli and Mushroom Quiche with a Spring Salad.  We were so busy talking I forgot to take a picture of it.
Dessert was the Earl Grey Tea Cake that I mentioned in my last post, but hadn't tasted yet. It's a dense cake, but good.  Debbie liked it too and asked for the recipe. The London Fog Latte was the perfect accompaniment.  I didn't attempt trying to make any fancy designs with the frothed milk.  I'll leave that to talented baristas.  ;-) 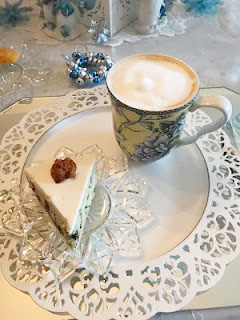 Shifting gears... Do you like to watch cooking shows? A week ago while watching Food Network's Diners, Drive-in's and Dives, Guy Fieri visited Kelly O's diner in Pittsburgh which featured a Polish comfort food - Haluski.  I had never heard of it before, but it looked good and easy, so after the program I Googled a recipe and made it.  My hubby and I really enjoyed it - A head of cabbage shredded and sauteed in butter with onion slices.  Then egg noodles and crispy bacon pieces are added.  Yummy!  Ever heard of it?  I'm not of Polish descent, but I love trying ethnic foods.
Posted by relevanttealeaf at 9:54 PM

Email ThisBlogThis!Share to TwitterShare to FacebookShare to Pinterest
Labels: Tea with Debbie Hall