Yesterday, I journeyed to Adrian, MI [about 90 miles southwest of where I live] with three friends to have tea at the Governor Croswell Tearoom.  Our reservations were for 11:00 a.m.

Al and Phyllis Wilkerson [Adrian natives] also own Sweet Afton tearoom in Plymouth, MI that I've visited and blogged about on several occasions.  The Governor Croswell Tearoom has been on my list of tearooms to visit for awhile, and I'm so grateful it finally happened. 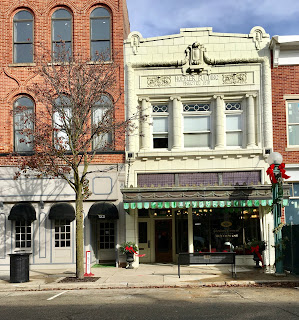 The tearoom is named in honor of the 17th Governor of Michigan, Charles Miller Croswell [1877-1881], who was a resident of Adrian.  His former home is currently the property of the local D.A.R. Chapter. 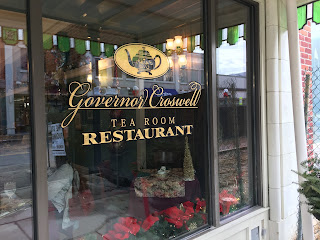 Al, the owner, graciously offered to take our picture in front of the tearoom. 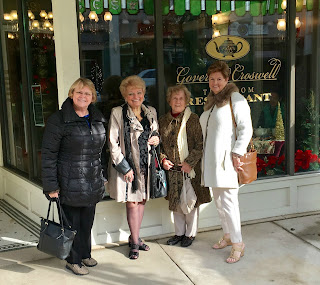 Interior photos of the beautiful tearoom all decorated for Christmas. 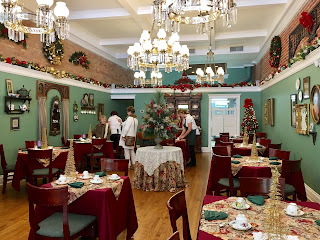 Once we were seated at our table, Al and Phyllis told us about the building's history.  Louis Hoefler, a successful attorney, rebuilt the 1910 building [which had previously been a saloon] for his cousin, Louise Burger, and she opened an upscale millinery shop in it.  [As a side note, Daniel Nathan was Mr. Hoefler's grandson, who wrote detective fiction under the pen name, Ellery Queen.]


Since the tearoom wasn't full when we arrived, I was able to take photos. 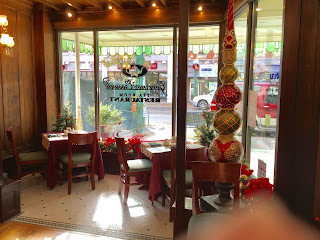 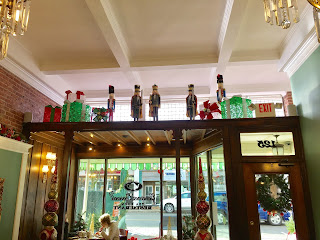 Phyllis aptly described Sweet Afton as cozy and homey, while Governor Croswell's is stately and elegant.

It's difficult to see in the photo, but teacups are intertwined in the garland.  The exposed brick walls, high ceilings, and oak floors are original. 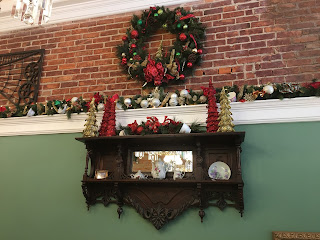 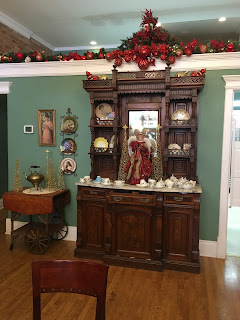 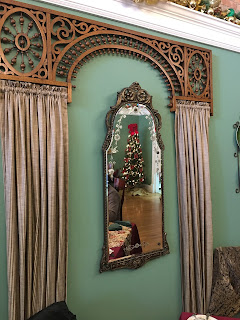 The chandeliers also have a great history - they came from the Dearborn Inn, ordered by Henry Ford.

Several years ago, Mr. Wilkerson said he purchased a baseball signed by Ty Cobb for $1,000 - a sizeable amount of money at the time. A local doctor persistently expressed interest in acquiring the baseball from Mr. Wilkerson, but he held on to it until 2010 when he purchased the Hoefler building and began transforming it into a tearoom.  He saw the beautiful chandeliers at Materials Unlimited - a high-end architectural, hardware, and home antique store in Ypsilanti, and knew they'd be beautiful in his tearoom.  Only problem, they were $40,000! He placed a call to the Dr. who was willing to pay $40,000 for the baseball, and he purchased the chandeliers. 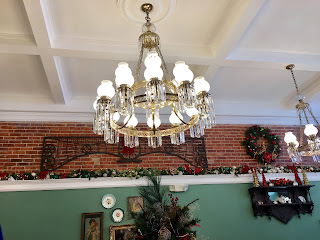 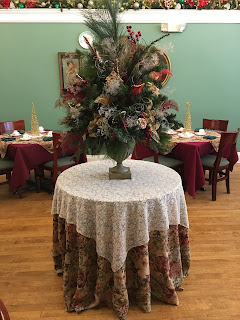 Napkins were folded in the shape of Christmas trees at each place setting.  [After we ate our server graciously gave us a tutorial on how to fold them.]  Phyllis said we could swap our teacup from any unoccupied table if we saw one we liked better, but we all opted to keep the ones at our place setting.  We began with teapots of Wild Cherry Amaretto and Holiday Tea [both black teas], but the Holiday Tea [cinnamon and spices] was too sweet for our taste buds, so we switched to Apricot. 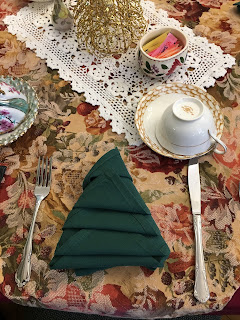 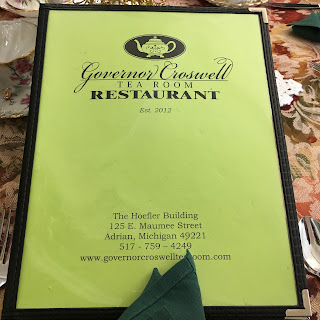 Joanie and I ordered the 'Madam Croswell' [slice of Quiche Lorraine, cheese muffin, and cup of Chicken and Rice Soup] while Linda and Judy ordered the traditional Afternoon Tea. 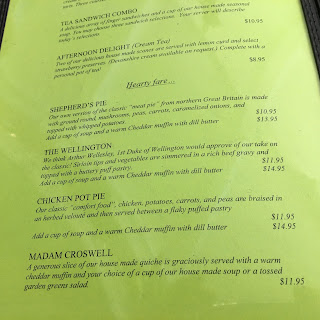 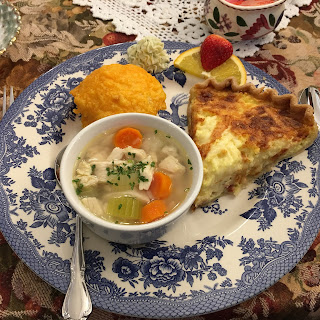 Linda and Judy's Afternoon Tea was brought out in courses.  The savories were on a folding server. 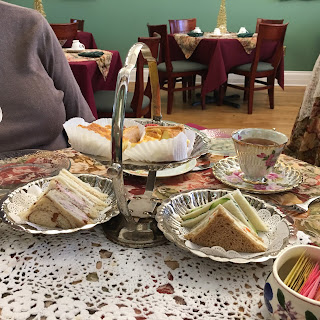 ~ Followed by a choice of scones, and dessert last. ~ 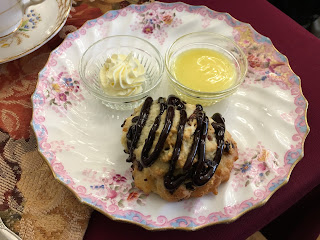 It was a wonderful tea experience, and I highly recommend the tearoom.  From Adrian, we traveled a short distance to Tecumseh, MI, tomorrow's post...

Posted by relevanttealeaf at 4:32 PM