A Day in Port Sanilac, MI

Yesterday following church, we made our way to the family summer cottage of our son-in-law and daughter on Lake Huron in Port Sanilac.  A family outing was scheduled there on July 24th, but granddaughter, Tiffany, came down with COVID, so it was rescheduled for yesterday.  It's hard to pick a time when all family members are available.  Had we gone in July, Steve and Sharon would have missed due to his sabbatical.  Yesterday, Jeremy and his family had to miss because three of them still aren't back from their California travels yet.

Below is a picture Jeremy posted of them at Turret Arch in Utah.  They were making their way to Pueblo, Colorado so Jeremy could show Landon and Izzy where he had his first high school teaching job.  We missed them yesterday, but they were having a fun time of their own.

Yesterday was an overcast day in the low 70's but no rain.  It was too cool for swimming in the lake but nice for walking on the beach.  It happened to be John and Tiffany's 7th Wedding Anniversary. John said he "fell down the rabbit hole" of Ancestry.com and was having great fun researching our side of the family [Jerry's and mine].  It made for great conversation around the table while we munched on a yummy charcuterie tray before having dinner. 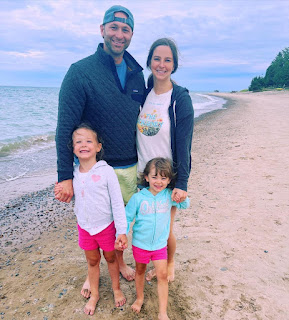 After dinner and a beach walk, everyone relaxed while watching a documentary Steve had seen on his sabbatical and wanted us to see.  It fit right in with John's ancestry research.  It's amazing what can be uncovered simply by testing saliva - a family of three siblings became aware they had 27 half-siblings because their father gave [unbeknownst to them] to a sperm bank.
Steve had a great time on his sabbatical, and it was good to have him back home again and in his pulpit yesterday. 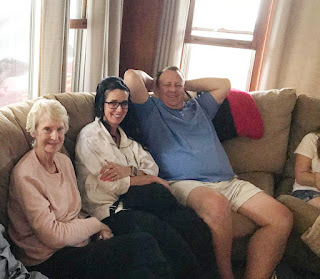 [Sharon's Mom, Sheena, Sharon & Steve]
We headed for home around 10:00 o'clock with happy hearts after spending family time together.
This morning began a new week and the first thing on my agenda was injection #2 for my knee. While I'm experiencing some improvement, the nurse said it's not usually until after the 3rd injection that patients really begin to experience a difference. 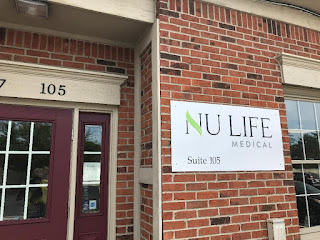 Thanks to 'The Victorian Girl' [one of my blog followers], I became aware of a 1992 movie, Mrs. 'Arris Goes to Paris that was also based on the same book used to film the current movie I recently blogged about, Mrs. Harris Goes to Paris.  The 1992 film starred Angela Lansbury and Omar Sharif.  We subscribe to YouTube Channel so I was able to watch it - twice!  There are similarities and differences in each version, and I enjoyed them both.  If you have YouTube, give it a watch.  It's a light-hearted, enjoyable movie. 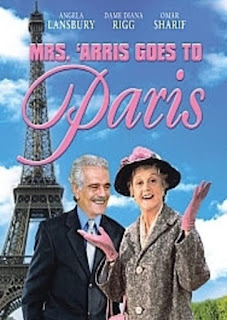 Posted by relevanttealeaf at 1:09 PM