Only one more post after this in the series about my recent trip to Southern California.  I hope you've enjoyed traveling along vicariously.  We had a wonderful time and did lots of fun things, yet  barely scratched the surface.   We have to return. 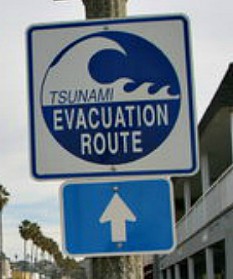 Originally we thought we'd go to Ronald Reagan's Presidential Library and Museum in Simi Valley on our last day in California, but after we checked into our hotel and discovered a StarLine Tour of Los Angeles & Hollywood, we decided to do that instead.

The sign below in our Hampton Inn elevator was a little unsettling [pun intended!]. 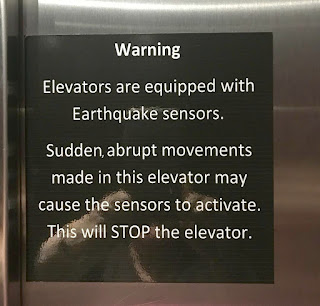 Our knowledgeable and interesting StarLine tour driver's name was Danny. His home country is Croatia, but he's been in California for over 30 years.  The tour was about six hours with three stops: Hollywood, the Farmer's Market, and Venice.  Our day in L.A. and surrounding areas was the only day of the trip that we had overcast skies, but it never did rain and later in the afternoon the sun popped out.

I discovered too late that Jerry should have sat on one side of the bus and me on the other so we would have gotten pictures of everything.  We only got photos of sites on the right side of the bus.

We started out in Beverly Hills - 5 square miles and an independent city with its own municipalities.  We drove past Beverly Hills Police Building - the prettiest police building in the world according to Eddie Murphy [Beverly Hills Cop movie], but no pics because it was on the left side of the bus! 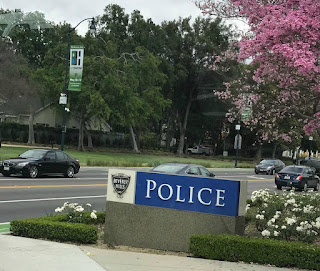 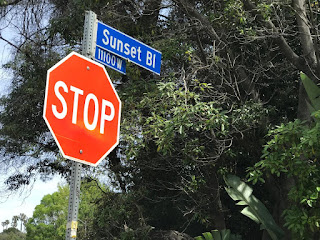 Rodeo Dr. where the rich and famous shop. 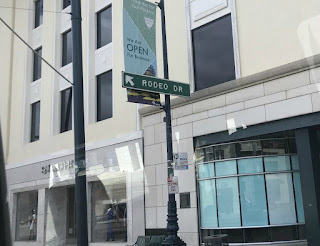 Wilshire Blvd. where the Beverly Wilshire hotel is located [a Four Seasons Hotel] and where the movie, Pretty Woman, was filmed. 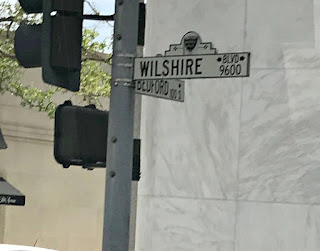 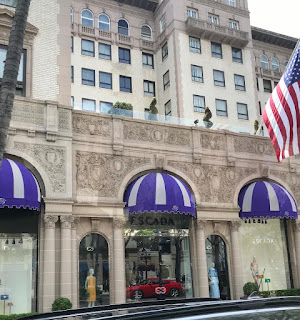 Below is the former Beverly Hills Waterworks Building until 1976 when it was adapted and reused by the Academy of Motion Picture Arts and Sciences in 1991 as a library and film archive.  It is known today as the Fairbanks Center for Motion Picture Study. 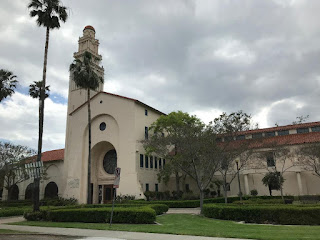 The Motion Picture Academy was formed in 1927 and has more than 5,700 members.  The 1st Academy Awards Ceremony was held in 1929 at the Hollywood Roosevelt Hotel [which Danny pointed out on the tour], honoring the best films of 1927 and 1928. 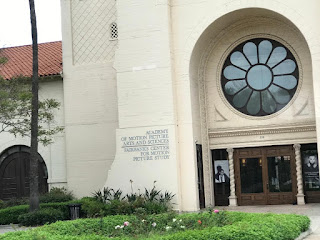 Below is a sign attached to a street light that reads: April is Earthquake Preparedness Month.  Yikes! 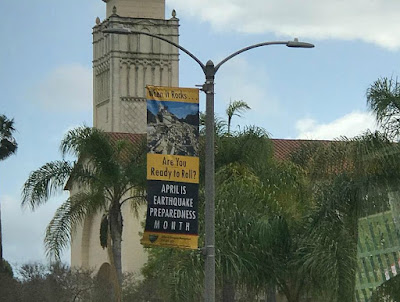 West of Beverly Hills on Santa Monica Blvd. is Century City.  Fox Studio lot is located there, now owned by Disney.  The studio Danny recommended visiting was Universal Studio - the largest movie studio in the world - but we were out of time so it will have to wait until our next visit. 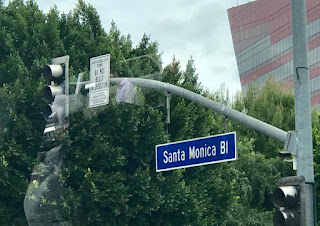 Hollywood High School "Portrait of Hollywood" mural at corner of Highland and Hawthorne. 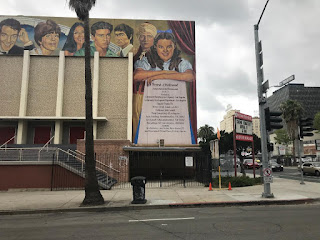 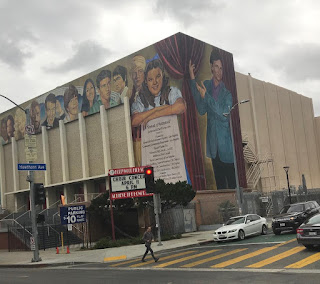 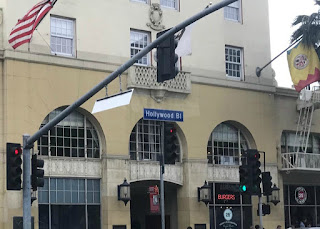 Below is TCL Chinese Theatre [Formerly Grauman's Chinese Theatre] famous for celebrity hand and footprints embedded in the concrete out front, but it was SO crowded I was more concerned about watching where I was going. 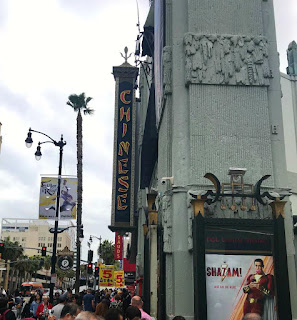 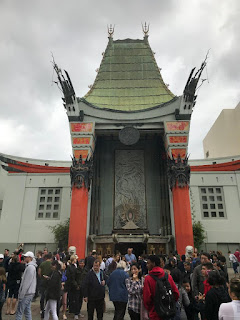 The Walk of Fame is also there - 15 blocks of 2,600 stars embedded into the sidewalk bearing the names of famous people.  We only took two pictures and were lucky to do that: Rev. Billy Graham and Tom Selleck [who was born in Detroit, MI.]  When my daughter was in her teens she thought he was such a hunk - along with countless other girls!  Remember Magnum P.I. from the 1980's?  We thought she'd get a laugh out of seeing his star. 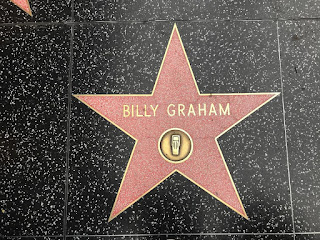 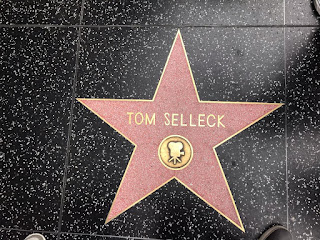 Hollywood & Highland Center is a shopping mall that offers a distant view of Hollywood Hills and the Hollywood sign.  See it w-a-y off in the distance on the top of the mountain behind us? 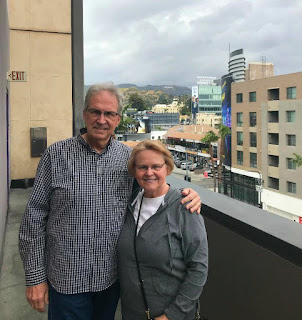 Thanks to zoom capabilities on iPhones, a better view is pictured below.  The letters [known as the Hollywood sign] are situated on Mt. Lee in the Hollywood Hills area of Santa Monica.  They were erected in 1923 and only intended to stand for a year or two for land advertising purposes, but they became an icon and have remained for decades.  Each lighted letter is 30 ft. wide and 43 ft. tall. 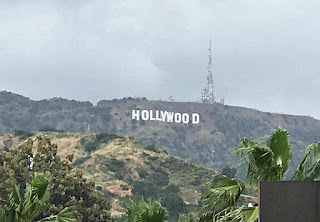 We had less than an hour for shopping and sightseeing before returning to the bus so we had to hurry.  In a souvenir shop we saw Elvis, and got a picture of him for our youngest son, Jeremy.  Elvis did love those Cadillacs! 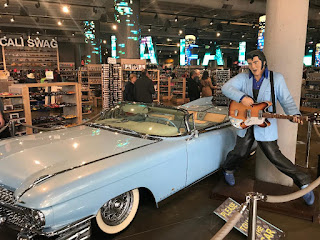 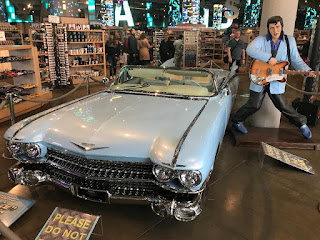 Then we were off to the original Farmers Market at Third Street.  It's been open for 85 years [since 1934].   We grabbed a bite to eat here. 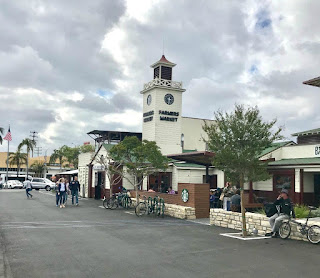 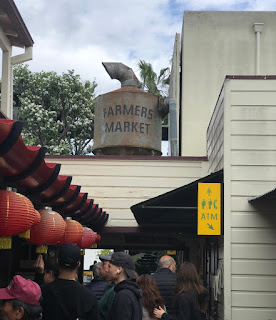 Nonna's Empanadas - the perfect finger food!  They were really good too.  We got the Chicken, Mushroom and Cheese. 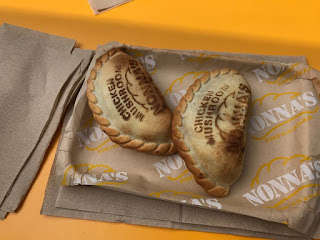 As we rode along Danny shared tidbits of information with us:


I'll complete the StarLine tour in my next and last post of the series.

Posted by relevanttealeaf at 11:30 PM