Did you watch Victoria last night - the last episode [8] of season 3?  I will surely miss the series on Sunday nights now, but Jenna Coleman [who portrays Queen Victoria] says she thinks there'll be another season. We can only hope!  Of all the wonderful tea scenes in the series, below is the only tea picture I could find on the Internet. 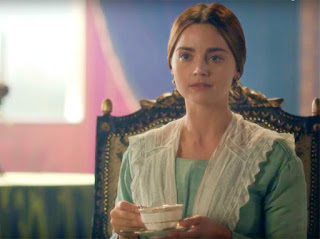 Kudos to PBS Masterpiece for another outstanding series.

While no one could blame Sophie [Duchess Monmouth and Queen Victoria's Mistress of the Robes] for wanting to get far away from her husband, Duke Monmouth, I hope she doesn't leave her son, William, to come to America with Footman Joseph.  In reality the Duke and Duchess of Monmouth are a fictional couple and didn't exist in Queen Victoria's reign, so I guess I won't be too undone if she does.

Feodora, Queen Victoria's sister, plays the role of the person you love to hate.  She's such a bitter, unhappy person and so underhanded.  I won't cry when she leaves the palace.  ;-)

Guess we'll all have to sit tight and wait for season three of The Crown to begin on Netflix. Filming is finished with the exception of some retakes, so hopefully we won't have too long to wait to get our next 'British Royal fix.'

In the meantime, this is the perfect time to finish the official companion book to the PBS  series.  As Daisy Goodwin [screenwriter of the series] said, "The queen was a great deal more than an old lady in a bonnet". 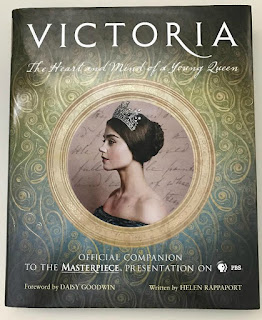 Posted by relevanttealeaf at 9:12 PM

Email ThisBlogThis!Share to TwitterShare to FacebookShare to Pinterest
Labels: Victoria