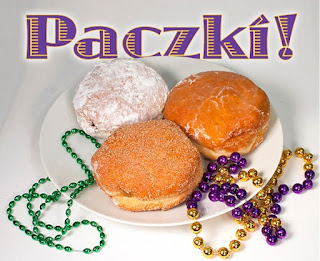 Today is Fat Tuesday, the last day of indulgence before Ash Wednesday ushers in the Lenten Season with its fasting and spiritual introspection.  If you live in an area of Polish descent [as I do], you know all about Paczki [pronounced Poonch-Key].

The tradition began as a way to use up ingredients such as lard, butter, sugar, eggs, and fruit before the beginning of Lenten fasting.  Paczki is Polish for "little packages."

They're more than a jelly donut - they have a much richer flavor because the dough is made with more eggs making them bigger and plumper.  Depending on size, paczki can have as many as 400 calories and more than 20 grams of fat.  Yikes!

I read this morning that one local bakery was making 1,600 paczki today.  I used to eat them every year, but I've passed the last couple of years.

Mardi Gras is French for Fat Tuesday.  Instead of a calorie laden donut, the King Cake is a New Orleans tradition thought to have been brought to the City from France in 1870.  I made a King Cake in 2013, but I haven't tackled one since. 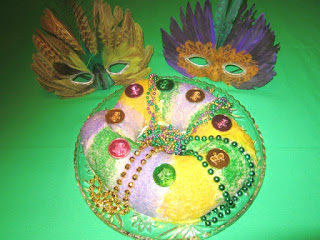 I was thinking food today, but something healthier.  Last month I mentioned a favorite blog, Home is Where the Boat Is, after making a centerpiece featured there.  More recently a Thai Slaw with a Peanut Dressing was shared. It sounded so yummy that I gave it a try for dinner tonight.  You can find the recipe here.

Instead of rotisserie chicken to make it a complete meal, I had some chicken breasts and a recipe for a lime marinade that I was anxious to try, and a new grill pan [courtesy of a recent birthday gift card] with a searing desire to be used.  [Pun intended!  ;-)] 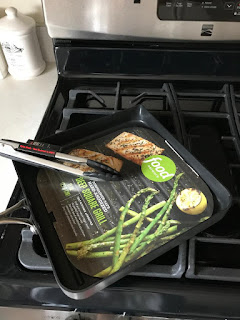 Love this pan!  It's perfect for grilling indoors when it's 19 degrees and uninviting outdoors! 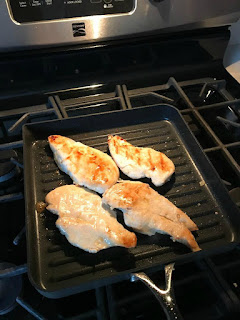 The chicken breast covered up most of the salad, but hubby and I gave both a hearty five stars.  Our daughter stopped by on her way home from work and sampled it.  She liked it too. This will definitely be on the menu again, but probably with a little less Sriracha.  The lime marinade can be found at Epicurious website. 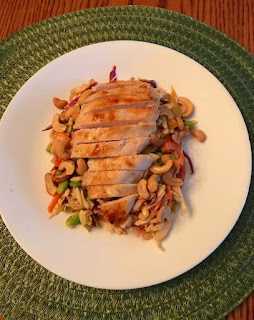 At the risk of being awake all night, a cup of Dragonwell green tea completed the meal. 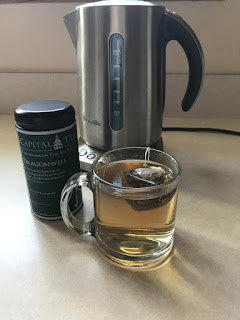 This concluded Fat Tuesday at our house!  How did you celebrate?

Posted by relevanttealeaf at 10:30 PM

Email ThisBlogThis!Share to TwitterShare to FacebookShare to Pinterest
Labels: Fat Tuesday; Paczki; Home is Where the Boat is;