As you know, Saturday was Sweetest Day, so earlier in the week I made reservations to take my Sweetie to The Whitney for a tour of the mansion and dinner afterwards.

The weather on Saturday in southeastern Michigan was anything but desirable.  The rival Michigan / Michigan State football game had to be delayed due to rain and high winds, and temps never got above 50 degrees.  Unfortunately, the team my family was rooting for [Michigan State] lost.

My hubby and I left home around 5:00 p.m. for The Whitney.  We enjoyed the tour of the mansion and then were seated in the Reception Room for dinner. 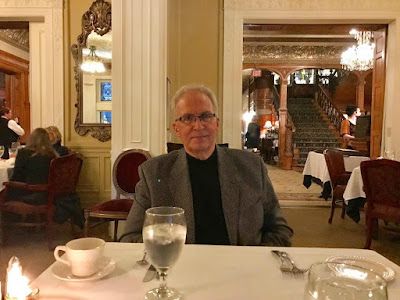 Jerry and I both ordered the same thing - Mansion Specialty, Seafood Sauté: Shrimp, Scallops, and Main Lobster with fresh herbs, chardonnay, and sweet butter served over toasted orzo.  It was delicious!  Initially my taste buds were set on their signature Beef Wellington, but I'm trying to correct a health issue so I decided to go with seafood instead of red meat. 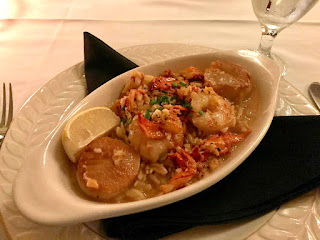 Since it was past the time for drinking tea [so caffeine wouldn't interrupt a good night's sleep], I ordered African Nectar: Rooibos with Vanilla, Mango and Hibiscus Blossoms to go with my meal. It was blended by Mighty Leaf and was very good.  Josh, our server, took our picture. 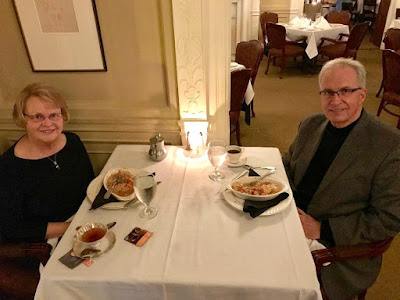 He gave me permission to take his picture and post it.  Josh is also a server for Afternoon Tea, and he served the tea meal my first day on the job as Tea Director.  He was [and is] very kind and helpful. 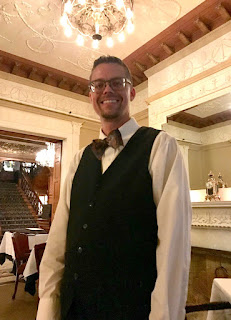 I didn't order dessert but Jerry got a decadent, flourless chocolate cake that he thoroughly enjoyed. 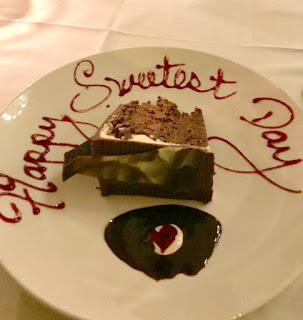 When we left the restaurant, the temps had dropped into the low 30's and there was a light dusting of snow on the ground and parked cars.  Seriously?!  I'm not ready for snow in October, and was glad when it melted quickly.

Sunday was my presentation at Shore Pointe Assisted Living during their monthly tea.  13 residents attended along with two staff members.  Inside and outside were festively decorated for fall. 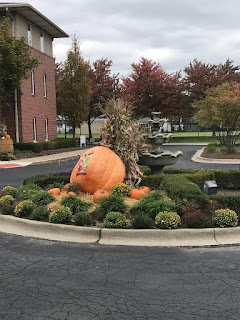 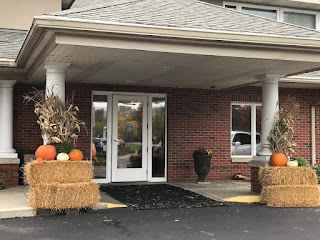 The table was all set up and waiting for the residents when I arrived. 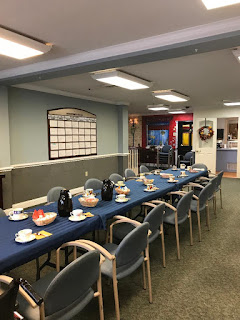 My theme was Special Bears Throughout Time.  I began with how the teddy bear came to be in the United States in honor of our 26th President, Theodore [Teddy] Roosevelt, and his bear hunt in Mississippi in 1902.

It was fun recalling several bears:  Winnie the Pooh; Paddington; Corduroy; Smokey the Bear [the longest-running public service advertising campaign in U.S. history]; Care Bears; Santa Bears; Yogi Bear; and more.  I included well-known companies that manufactured stuffed bears, and one of the residents commented that early teddy bears weren't nearly as 'cuddly' and soft as today's teddy bears.  That's because they were stuffed with excelsior packing materials which made them very stiff.

I took a 1986 Dayton-Hudson's Santa Bear [the first one came out in 1985], and my Raikes Lionel Railroad Bear with carved wooden face and paws.  I also took a Boyd's Bear figurine and a Cherished Teddy figurine [both tea themed]. 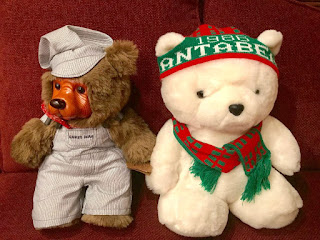 We talked about the 19th-century fairy tale, Goldilocks and the Three Bears written in 1837, and even included Elvis Presley's hit song [Let Me be Your] Teddy Bear in 1957.   It was a fun walk down memory lane for the residents.  I gave them each a bag of Honey Teddy Bear Cookies as their treat. 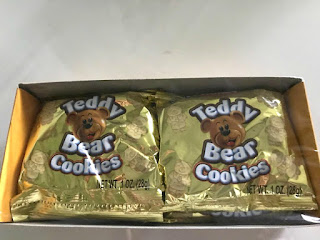 The aides had already started clearing the table, and some of the residents had left to go back to their rooms when I remembered I hadn't taken their picture.  I took it anyway with the residents who remained. 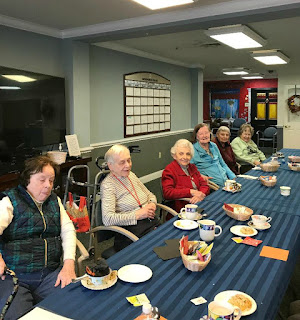 By the time I got home it was 4:00 o'clock and our annual church Harvest Fest had already begun.  I didn't have the energy to change into warm outdoor clothing and drive out to the property, but my hubby said it was the largest attendance we've had to date.  I only have one picture of the bonfire to post, but I know lots of photos were taken of the hayride, trunk or treat, and chili-cook off contest.  It was a fun weekend! 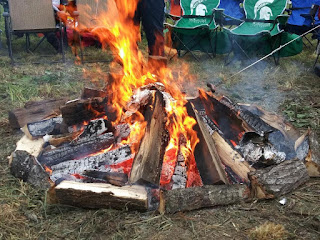