Tea in the Dining Room

Afternoon Tea was served in the mansion's formal dining room today.  I love that it's moved around to different rooms.  It makes tea time interesting, and I enjoy being in the various rooms. 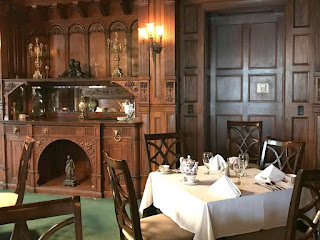 Those who know me well, know I love history.  In the evenings when I come home from work I usually dedicate some time to researching the Whitney family.  How could I work in the mansion without knowing who the occupants were? 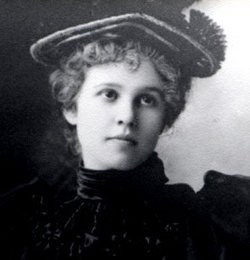 Mrs. Flora Whitney [David's first wife and Katherine's mother] died in 1882, and never lived in the Whitney Mansion.  [It wasn't completed until 1894.]  A year following her death, David married her sister, Sarah Jane, who was 13 years younger than Flora.  Three Whitney children were still living at home - David 15, Flora Ann 13, and Katherine 9.  Grace, 19, had married and was no longer living in her parent's home.  Mr. Whitney needed someone to help with the children who they knew, trusted, and felt comfortable with.

As Katherine neared adulthood, she wasn't content to spend her time in social pursuits with her peers.  She chose to be directly involved in helping the needy in the Detroit area instead.  She established an orphanage and founded a facility to aid young mothers.

In 1891 Tracy McGregor came to Detroit to run the Mission for Homeless Men that his father started.  Katherine met Tracey while volunteering at the Children's Free Hospital, and she and her father gave generously to McGregor's mission.

Katherine loved music and was a pianist. Her friendship with Tracy grew when she volunteered to play the piano and sing at the McGregor Mission services.

McGregor didn't come from a wealthy background, and was reluctant to marry Katherine because of their financial differences, but Katherine told her father she loved him, and Mr. Whitney, fond of Tracy himself, intervened by giving the mission a sizeable sum of money, and sent Tracy to Europe to learn how their social establishments for the poor and disadvantaged were run.

Upon his return, and after the death of her father, the couple married in San Francisco, California in 1901.  Tracy didn't want a Detroit ceremony because he feared people would think he married Katherine for her money. 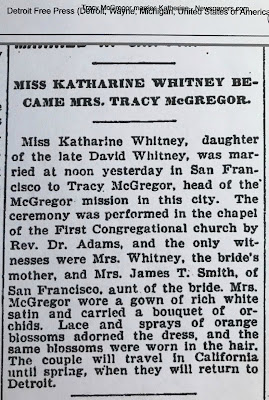 After an extended honeymoon the couple returned to Detroit where they gave unselfishly of themselves to the mission and other charitable causes.  They were great philanthropists and established the McGregor Fund in 1925 - a private foundation organized "to relieve the misfortunes and promote the well-being of mankind."  The McGregor Fund is still assisting organizations serving the metropolitan Detroit area today.

Tracy McGregor died in 1936, and Katherine died in 1954.  She suffered from depression, and was committed to Craig Psychiatric hospital in Beacon, N.Y. where she spent the last ten years of her life.  They had no children. Both are buried in Woodlawn Cemetery.

Posted by relevanttealeaf at 7:27 PM

Email ThisBlogThis!Share to TwitterShare to FacebookShare to Pinterest
Labels: The Whitney Restaurant and Family