There were no reservations for Afternoon Tea today, so my hubby and I headed off to Woodmere Cemetery on W. Fort Street in Detroit so I could continue my research on the Whitney family. Normally graveyards are the last place you'd find me, but I'm on a quest for information! ;-) 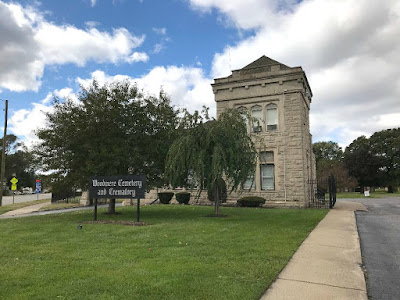 Woodmere cemetery is an old cemetery.  It was organized in 1867 [two years after the Civil War ended] by a group of prominent businessmen who purchased approximately 250 acres to establish a rural cemetery for the City of Detroit.  [It's definitely not rural today!]  Construction began in 1868 and the cemetery was dedicated in 1869.

After checking in at the information office, two cemetery associates took us to section F where David Whitney, Jr.'s vault/mausoleum is located.  There are no exterior markings on the mausoleum to indicate how many members of the Whitney's family are buried inside, but the associate said there were several - some of whom were cremated.

I was given the business card of a genealogist who works for the cemetery to contact for more detailed information. 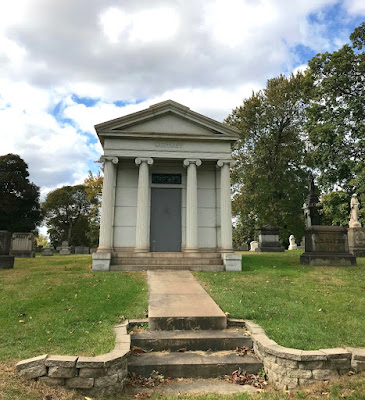 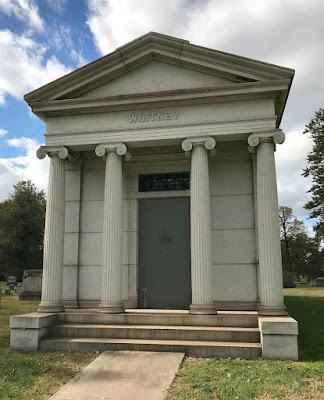 Back view of the mausoleum [below].  It appears the lower half of the stained glass window was broken out and covered with a piece of plywood. 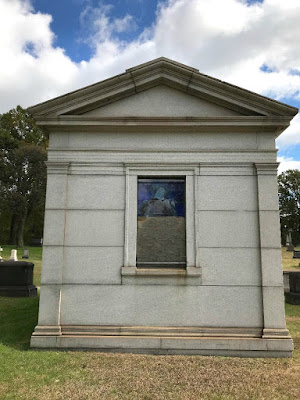 Right next to the mausoleum is Grace Whitney Hoff and her husband, John's, grave sight and monument.  Grace is Mr. Whitney's first-born child. 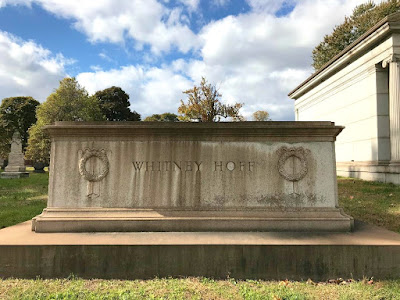 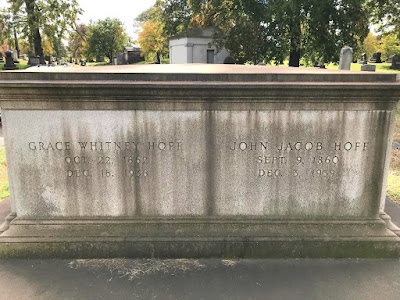 I was saddened to discover that in December 2012 many of the mausoleums were vandalized, and the bronze doors were removed and presumably sold for scrap. Mr. Whitney's mausoleum was one of them.  If you look at the photos I took today, the door to the mausoleum is covered with a large piece of plywood painted gray.  Below is an Internet photo where the bronze doors are still intact.  The overgrown shrubbery has all been removed. 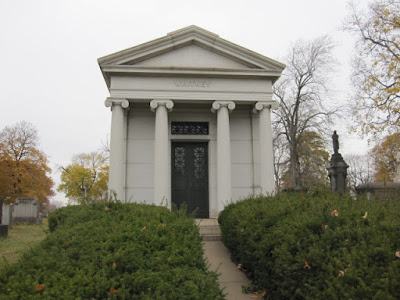 From Woodmere Cemetery, we drove over to Woodlawn Cemetery where Mr. Whitney's youngest daughter, Katherine Whitney McGregor, is buried along with her husband, Tracy.

Woodmere Cemetery sits on 140 acres and is located at Woodward and Eight Mile Road.  It was established in 1895, and attracted some of the most notable names in the City of Detroit.

The reason Mr. Whitney isn't buried there is most likely because his first wife, Flora, died in 1882 before Woodlawn Cemetery was established.  Flora is probably the first member of the Whitney family to be entombed in the mausoleum. 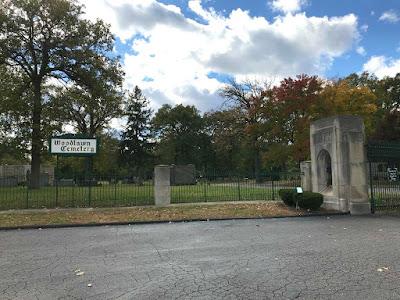 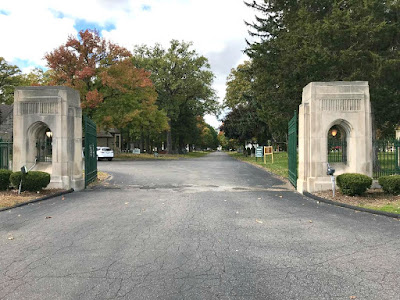 We stopped at the information office to see where the McGregor plots were located, and were told they were in section 10. 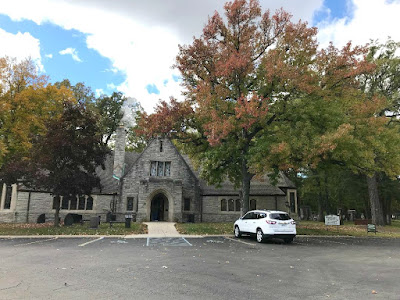 Also in section 10 was J.L. Hudson's mausoleum [founder of Hudson's department store].  Mr. Hudson was a pallbearer at Mr. Whitney's funeral.  I couldn't resist taking a photo of his mausoleum, since I've done a lot of research on him too. 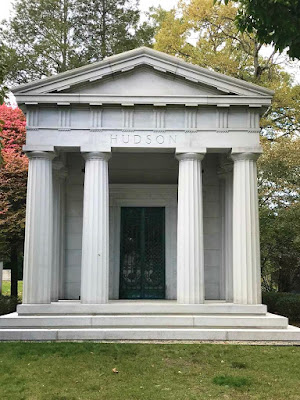 I peeked inside the bronze doors and could see his memorial on the floor.  On the back wall were the names of other family members entombed, but not visible in my photo. 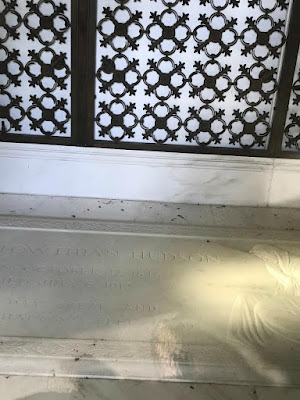 Close to Mr. Hudson's mausoleum was the Dodge mausoleum.  John and Horace Dodge were founders of the automobile firm, Dodge Brothers Company.  Ironically, John Dodge and J.L. Hudson were neighbors while they were alive on East Boston Blvd. in Detroit, and they're neighbors in the cemetery too! 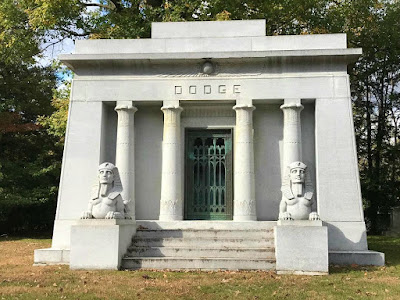 Right next to the Dodge mausoleum was Matilda Dodge Wilson's mausoleum.  Matilda was married to John Dodge at the time of his death and they had three children.  She later married Alfred Wilson and together they built Meadow Brook Hall. 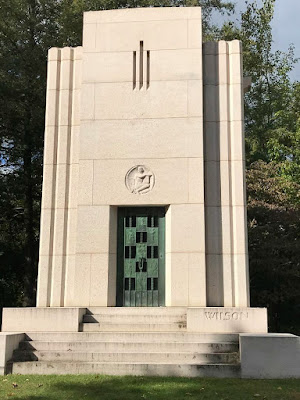 Finally we came to Tracy and Katherine McGregor's tomb. 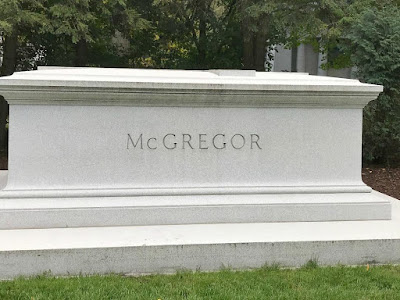 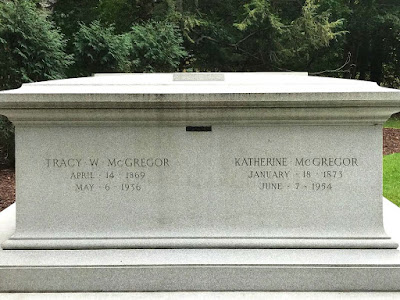 Edsel and Eleanor Ford and their children are buried at Woodlawn Cemetery as well as Diana Ross' parents and most recently, Aretha Franklin.

Two cemeteries in one day was quite enough, so we headed back home.  As we rode home I pondered that it doesn't matter how rich or prominent a person is, it's appointed unto man [and woman] a time to die [except for those who are alive when the rapture takes place]. If the individuals entombed in mausoleums or beneath cement monuments had a personal relationship with Christ, when He returns their bodies will burst forth to be reunited with their souls in Heaven for eternity. The Bible says in I Thessalonians 4:14-17:  "For if we believe that Jesus died and rose again, even so God will bring with Him those who sleep in Jesus... For the Lord Himself will descend from Heaven with a shout, with the voice of an archangel, and with the trumpet of God.  And the dead in Christ will rise first.  Then we who are alive and remain shall be caught up together with them in the clouds to meet the Lord in the air.  And thus we shall always be with the Lord."

What a promise!  Can't you just imagine what it will be like when all the bodies of the "redeemed in Christ" break their tombs wide open and ascend through the clouds to their eternal home with the Lord?

The words the Apostle Paul wrote in I Corinthians chapter 15: 54-57 bring such comfort:  "Death has been swallowed up in victory.  Where, O death is your victory? Where O death is your sting?...  Thanks be to God!  He gives us the victory through our Lord Jesus Christ."

Email ThisBlogThis!Share to TwitterShare to FacebookShare to Pinterest
Labels: Woodmere and Woodlawn Cemeteries; Whitney and other prominent Detroit families