When I was with my Southern Tea Tour friends yesterday, Teresa asked if I was going to get up early again to watch the Royal Wedding of Princess Eugenie and Jack Brooksbank. 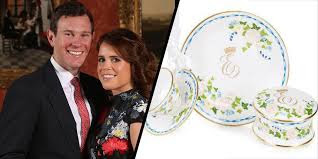 If you recall, Teresa planned an early morning surprise tea party for our group as we watched the nuptials of Prince Harry and Meghan Markle while we were in Charleston last May.


The bride and groom will 'tie the knot' at an 11:00 a.m. ceremony tomorrow morning [Oct. 12th] in St. George's Chapel in Windsor. American Lifestyle Channel [TLC] will cover the event in the U.S. beginning at 4:25 a.m. Eastern Standard Time.  The ceremony will begin at 6:00 a.m. EST.

I have an early morning Dr. appointment, so I'll be up, but I won't be watching TV.  Do you plan on rising early to watch the nuptials?

I'll sip a cup of tea in honor of their marriage, and hope they'll live happily ever after!

Posted by relevanttealeaf at 9:58 PM