I ordered a tin of Harney & Sons Murder on the Orient Express tea, because I've decided to make the Orient Express the theme of the next program at the assisted living tea. Harney Teas has free shipping on all domestic orders right now, so if you're thinking about placing an order now's the time to do it. 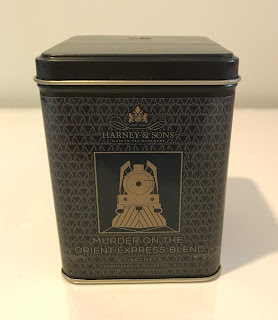 Harney's always includes samples with an order, and this order included a packet of Pomegranate Oolong fresh brew iced tea.  I was anxious to try it.  Directions were to steep the tea packet in 2 cups of boiled water and allow it to steep for 15 minutes. 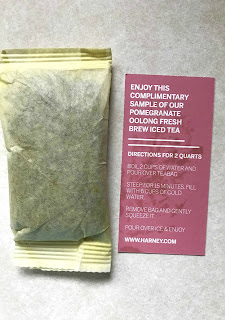 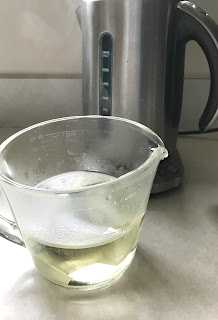 Then pour 6 cups of cold water over the steeped tea.  It's refreshingly delicious!  Because it's an oolong, it has a greenish yellow color instead of black tea's brown color.  This is not a requested review, but because the tea is so good I wanted to make you aware of it. 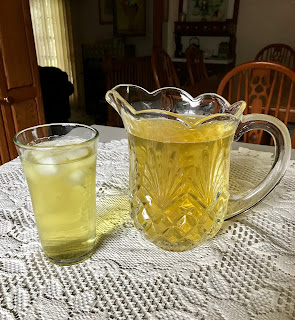 While at Harney's website I discovered two grandsons have made a series of six podcasts titled As the Tea Steeps - How tea shaped the Harney family and how the Harney family shaped tea in 21st century America.

The first episode is titled Memories of a Matriarch in which they interview their 86-year-old grandmother, Elyse Harney, as she tells how she and John [founder of Harney teas] met and married, as well as other memories.  The podcast is 18 minutes long and well-worth the time. 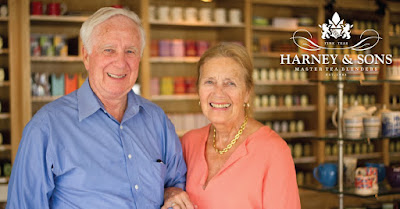 The second podcast is Memories of a Tea Connoisseur in which Norwood Pratt is interviewed along with Elyse.  Norwood states that as recently as 1980 there were only about six specialty tea businesses offering teas that weren't cheap tea bag fannings in the United States.  Hardly anyone in our country was educated about tea back then, but by 1992 specialty tea businesses were increasing and tea knowledge was on the rise.

I've listened to three podcasts so far with three more to go.  To access the podcasts Google 'Harney & Sons As the Tea Steeps Podcasts', or go directly to Harney & Sons website to listen to it by Libsyn if you don't have iTunes or Google Play.

As a update on last Sunday's Rosie the Riveter presentation, it was well attended with 20 residents and guests.  I was delighted to have four 'real' Rosies in attendance who shared their memories.

Grandson Landon comes to spend a few days tomorrow [Thursday] and a visit to the restored WWII Willow Run Bomber Plant Museum is on the agenda.  He and his papa will enjoy the airplanes and I'll enjoy seeing the section devoted to Rosie the Riveter.  I'll be sure to blog about it.


I'm thinking Disney's Christopher Robin [son of A.A. Milne, creator of Winnie-the-Pooh stories] might be on the agenda while Landon is here too. 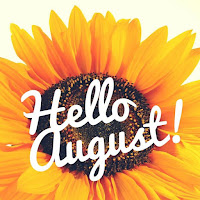 Posted by relevanttealeaf at 10:00 AM