Tea and a Sweet Visitor

Yesterday I cloistered myself in my office to begin some serious study and preparation for my upcoming program at the assisted living facility.  I decided to open the tin of Harney & Sons tea, Murder on the Orient Express Blend, so I could sample it before serving it to the residents. 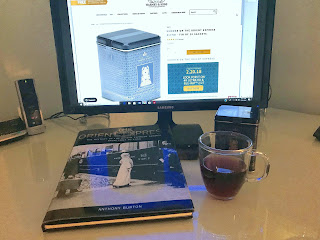 The website [as well as the tin] lists what's in the blend - black tea, oolong tea, jasmine tea, bergamot oil and natural flavor, but doesn't include Mike Harney's rating with details. Normally jasmine and bergamot are very easy to detect, so that's what I was expecting.  I was very surprised to get a mild, smoky taste, but no pronounced jasmine or bergamot.  I liked it, but wondered if my taste buds were skewed, so I went to the reviews to see if other customers had picked up a smoky taste.  Yes, they had.  It's a fun, surprising tea and the mild smokiness is reminiscent of the ancient Orient.  The tea provides a surprising twist just like the murder mystery for which its named.  Out of 92 reviews, 74 gave it five stars.  If you count me, it's 75 with five stars!

While I was at Harney's website I ordered a tin of their Goji Berry caffeine-free fruit tea.  Goji berries grow in northwest China, and have been used in Chinese medicine for centuries.  Supposedly they improve liver and kidney function as well as eyesight.

It's said all work and no play makes a dull person, so I had the pleasure of my daughter stopping by late in the afternoon with sweet little Evie [my great granddaughter]. Lori's babysitting her for five days while Tiffany and John are away on a trip to Boston to celebrate their third wedding anniversary. 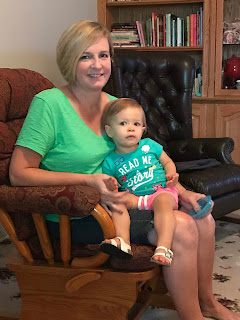 I got rid of the highchair after my 'confirmed' last grandchild, Ellie, was old enough to sit up at the table, not thinking about great-grandchildren who would need it.  Evie's still small enough, and was perfectly content to sit on top of the table while Lori fed her.  We enjoyed their visit. 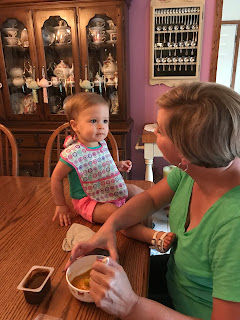 We received the good news from Tiffany recently that another great-grandbaby will be joining our family the end of March 2019.  I love the saying, "Babies are God's way of saying the world should go on."

Posted by relevanttealeaf at 10:24 AM