I receive e-mails from the Whitney restaurant in Detroit when something special is happening, and last week an e-mail arrived stating they were having a charity estate sale to get rid of old dishes, glassware, candelabras, furniture and other miscellaneous "treasures" that had been stored away.  The sale was scheduled for last Saturday morning beginning at 10:00 a.m., with all proceeds going to the Cass Community Social Services.

It sounded like a fun thing to do on a Saturday morning.  The only problem was we had torrential rain showers last Saturday.  I didn't think they'd proceed with the sale, but shortly after 10:00 a.m. I called to inquire, and was told it was being held inside an old storage building behind their property.  So off we went. 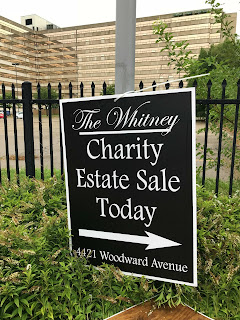 The interior of the building looked like something you'd see on American Pickers.  The windows were all boarded up and the only light was from two open doors.  I'm not a good "picker". I don't like to dig through boxes and crates, or things covered with dust and cobwebs.  But there were several people who were finding all sorts of "treasures" and having fun rummaging.

We were just about to leave when I spotted a box sitting on the floor.  Amazingly no one had torn it open.  On the outside it read 12 oz. Lion Head bowls.  So I opened the box and found three smaller boxes inside, each containing four Lion Head bowls still in their original wrapping, and never used. 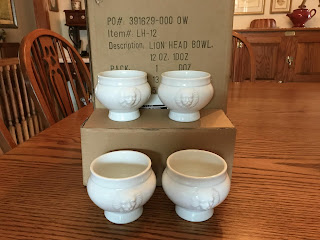 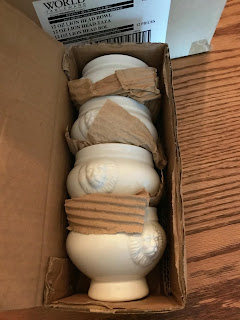 These definitely piqued my interest!  I asked one of the workers how much they were and was shocked when he said $6 for the dozen.  I promptly paid him and walked out happy with my Whitney treasure.  Soup will definitely be served in these bowls this winter! 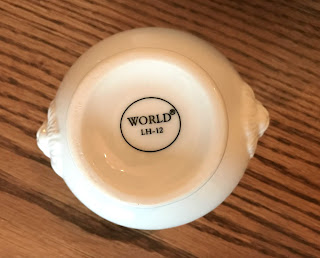 By now the downpour had subsided to a light rain, so we walked around to the front of the Whitney mansion for a few pictures.  Below is the original carriage house at the back of the mansion's property. 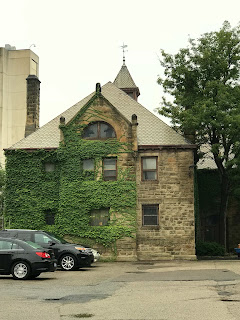 Pictured below is the front of the beautiful mansion.  Construction was completed in 1894 for lumber baron, David Whitney, Jr.

You know how I love history details, so I have to tell you the mansion is 22,000 sq. ft. and has 52 rooms including 10 bathrooms, 20 fireplaces, 218 windows [some with leaded windows crafted by Tiffany's of New York], and it was the first residential house in Detroit to have an elevator.  It was built at a cost of $400,000 in 1894 - about $9.5 million today.  It's one of Detroit's landmarks that thankfully has been preserved. 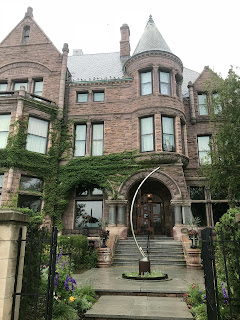 After an extensive restoration it became a restaurant in 1986 and was dubbed "An American restaurant in an American palace."  I've blogged about having Afternoon Tea there five times, with lots of pictures, so if you're interested in seeing those posts you can type "The Whitney" in the search box of my blog.  It's the only place in downtown Detroit that serves Afternoon Tea.

On another subject... I didn't take any pictures at Sunday's tea at the assisted living facility, but the program was well received.  We had three men who attended this month which is unusual - it must have been the subject of a train that brought them out.

Air travel was the demise of the Orient Express.  It made its last run on May 20, 1977.  An auction was held in Monte Carlo for the Wagon-Lits coaches, and American, James Sherwood, purchased several of them.  He realized the Orient Express possessed great nostalgia from a more gracious age.  He formed Belmond Ltd., and restored the luxury trains and steam engines, and staffed the dining cars with Michelin star chefs.

Presently there are designated Sunday trips where Afternoon Tea is served on board the luxury train for £280 per person [departing from London traveling through the English countryside].  That's $357 in American dollars.  Would you pay that to have Afternoon Tea on the famous luxury train?  At the website I noticed all the teas were 'sold out,' so there are people willing to pay that price. 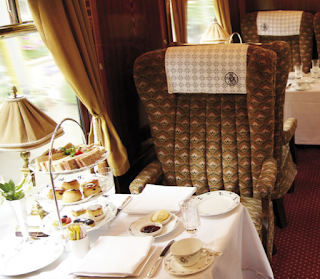 Posted by relevanttealeaf at 11:00 PM