Before I get into Part II, I wanted to share that Angela Renals wrote a lovely post about our time together at Tea Leaves & Thyme tearoom titled Lessons in Grace... You can read her post here.

Angela McRae also blogged about our gathering, and her post can be read here.

After checking in at the Drury Inn & Suites and taking our luggage to our rooms, we met in the lobby at 6:00 p.m. for our 13 mile drive into the heart of downtown Atlanta for dinner at Mary Mac's Tea Room.

Mary Macs wasn't on the itinerary for last fall's trip, but I added it to this one.  The State of Georgia and the House of Representatives officially named them "Atlanta's Dining Room," and Angela McRae gave them a #5 rating [with 5 being the highest].  She also said it was an 'Atlanta tradition' - a piece of Atlanta's history, so I had to add them to the itinerary.  Everyone was glad I did - well maybe not my hubby initially. When he was dodging Atlanta traffic in a 15-passenger van he quietly said to me, "Next time plan a rural tea trip!"  ;-)  Once we were there and he tasted the delicious food, he was glad we went. 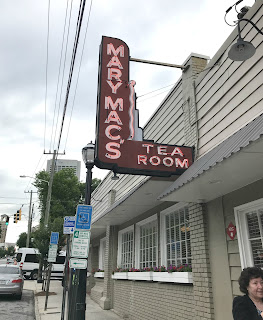 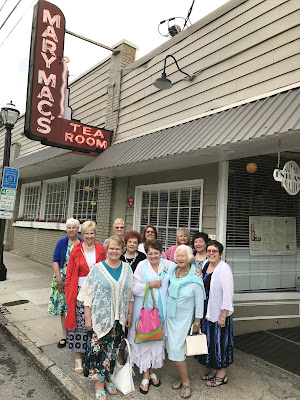 You'll notice there were no hats worn for this tea room visit, because Mary Mac's isn't dainty fare. It's homestyle southern cooking at its finest.

Jan Whitaker's book about the social history of American tea rooms was helpful in providing background on twentieth century tea rooms.  They were run by women, and contrary to what their name suggests some didn't revolve around tea at all.  The name 'tea room' was a misnomer.  They were actually small restaurant dining rooms that served lunch and dinner.  They introduced a new way of doing things to an all-male restaurant industry, and eventually became recognized as a national institution with a stronghold on the main streets of large cities.


I bought Mary Mac's cookbook with its history. 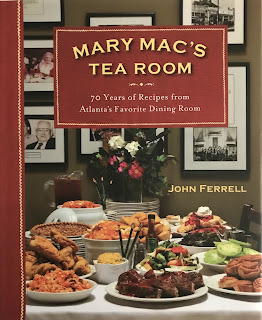 After World War II ended, Mary MacKenzie, was in search of a living and opened her Atlanta tea room in 1945 - along with 15 others!  She sold it to Margaret Lupo in 1962 who insisted no canned vegetables would ever be used - everything was fresh.  Margaret Lupo sold it to John Ferrell in 1994, and he remains the current owner, maintaining the high standards of his predecessors.  Today it's Atlanta's only original tea room-style restaurant that still exists from the 1940's era, serving over 1,000 meals a day. 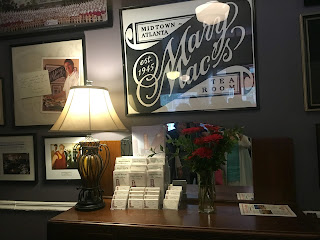 They don't take reservations, but we were fortunate and were seated fairly quick in the Atlanta Room.  The size/seating capacity of the tea room has expanded since Mary MacKenzie owned it.  It's gone from one dining room to six. 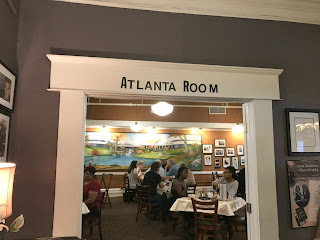 As you can see, at 6:30 p.m. the room where we were seated was still quite busy. 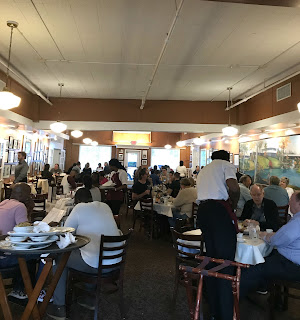 This is Moe, our server. 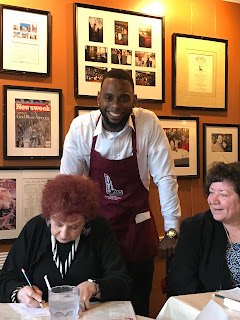 They do things a bit differently at Mary Mac's.   You don't tell the server what you'd like to order.  Order forms and pencils are on every table and you fill out the order form and give it to the server.  Barbara was filling out her order form in the above picture.  Below is my order form. 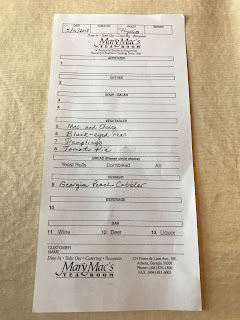 I may have been born in Detroit, MI, but I love Southern food [my Daddy was born in Louisiana, and I lived there for a few years during my early childhood].  I ordered the vegetable plate which consisted of Black-eyed Peas, Tomato Pie [it was a toss up between those and Fried Green Tomatoes], Dumplings, and Mac and Cheese [which they're known for].  Dessert was Georgia Peach Cobbler.  Sorry there's no picture of that.  Jerry and I shared it because we were so full, but trust me it was good! 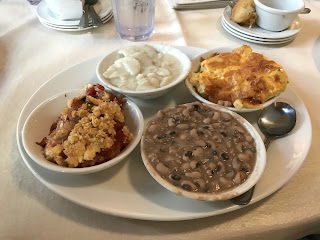 Before our orders came out, first-timers at Mary Mac's are given a small complementary bowl of Pot Likker and a Cornbread Muffin.  The Cornbread is crumbled into the cup of broth.  What is Pot Likker?  It's the broth which Collard Greens have simmered in with a ham bone.  It was so good!  I love dainty tea food, but sometimes you've just got to have real stick-to-your-ribs food!  ;-)   And, of course, there was iced sweet tea - the table wine of the south! 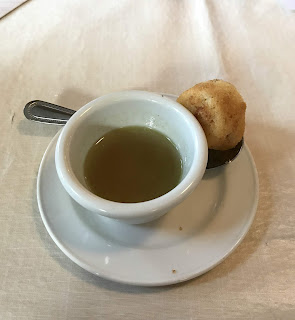 I think our traveling companion, Judy, liked Moe as our server! ;-) 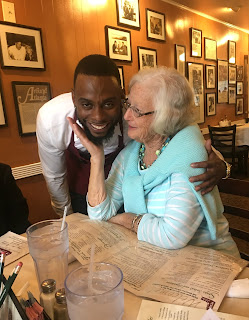 The large picture of Scarlett O'Hara was hanging in the hallway by the Ladies' room, and I couldn't resist taking a picture of it. 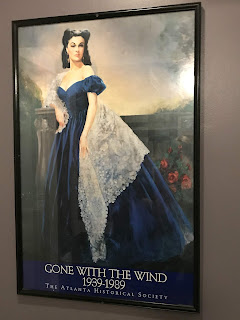 If you're ever in Atlanta, be sure to go to Mary Mac's.  The address is 224 Ponce de Leon Avenue NE.  www.marymacs.com

Posted by relevanttealeaf at 6:52 PM