We arrived in Williamsburg, KY around 7:00 p.m. and checked into the beautiful Cumberland Inn. 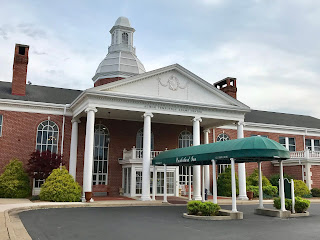 The following message was on the beds in each room.  I highly recommend staying at this inn if you need lodging while traveling in this area.  Thank you, Linda Jennings for recommending it. 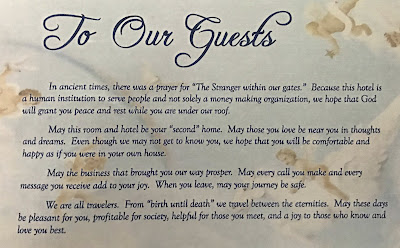 We shouldn't have been hungry, but some of us wanted a bit more substantial food that wasn't as rich and calorie laden as tea party food, so we went to a nearby Mexican Steakhouse.  The longhorn bull we're standing by is actually a barbecue pit! 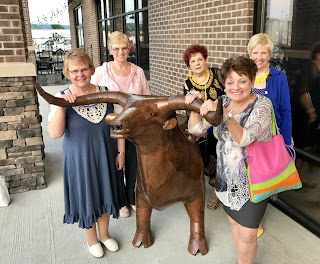 At 9:00 p.m. we all met up on the second floor in the hotel's beautiful sitting area to distribute gifts that some brought.  It was like Christmas!  Judy and her niece, Cheryl H., are pictured on the right, and Rebecca on the left. 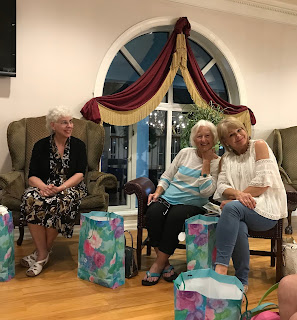 Sisters Ann and Cheryl K. on the left and Teresa on the right. 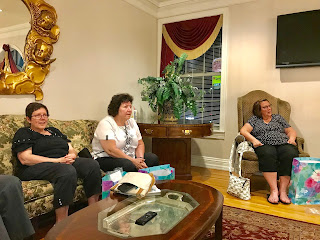 Barb on the left, and Lori on the right. 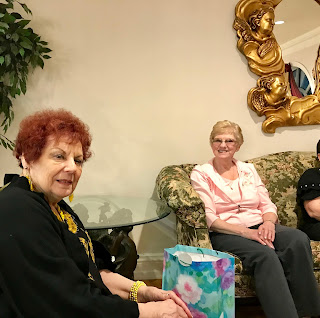 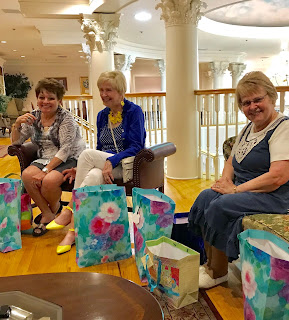 ~ Contents of one gift bag ~ 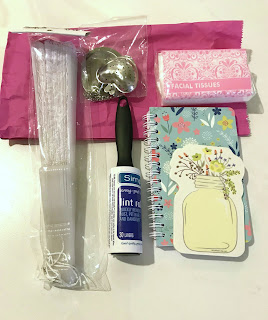 Three gals went together on this lovely gift bag that contained a hanging jewelry bag, a pair of earrings [in a cute teapot box]  a molded teapot sucker, and a bag of loose leaf 'Garden Tea' that is the signature blend of the Whitney restaurant in Detroit [packaged in a cute teacup bag], and a tea leaf shaped infuser. 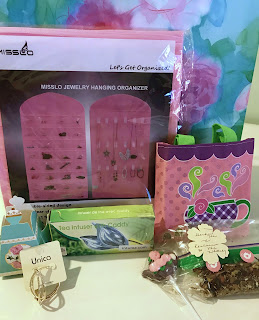 A white porcelain teapot picture frame was from another participant. 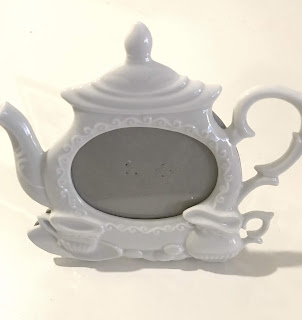 I blogged about the gift bags from Lori and me before we left on the tour, but I didn't share what was in them other than the Moroccan tea glasses.  They also included a Michigan Cherry Scone Mix, Green Tea cleansing tissues, purse-size tissues, and hand sanitizer. Consumable items are not pictured because they were consumed on the trip ;-) - Mrs. Fields White Chocolate Chip/Macadamia Nut Cookie, and items representing the State of Georgia: Snapple Peach Tea, a bag of Salted Peanuts, and a Pecan Log roll. 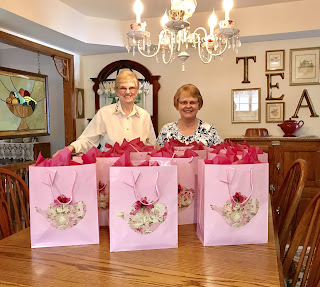 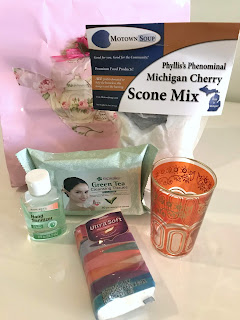 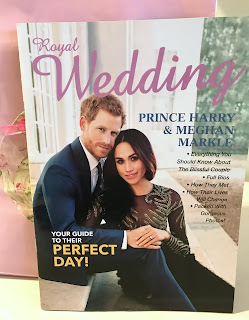 Remember the Stuckey's roadside convenience shops along U.S. highways that sold pecan log rolls? Stuckey's originated in Georgia when W.S. Stuckey's orchard produced a successful pecan harvest, and he began selling them at a roadside stand. He opened his first store in Eastman, Georgia in 1937 and sold his wife Ethel's pecan log rolls and pecan divinity.  A restaurant, novelty section, and gas pumps were added with their trademark teal blue roof.  At its peak Stuckey's had 350 franchises.  Today there are 115 in 17 states, but I didn't notice any on our trip.  I couldn't resist injecting this blast from the past, and the reason for putting pecan log rolls in the gift bags. 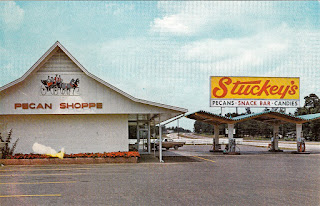 Nancy C. a resident of Michigan's Upper Peninsula, would have been a participant on the trip that was cancelled last fall.  She couldn't go this time, but sent two items that she would have given to everyone had she gone on the trip.  I included them in our gift bag:  a fan, and lilac soap from Mackinac Island's Grand Hotel. 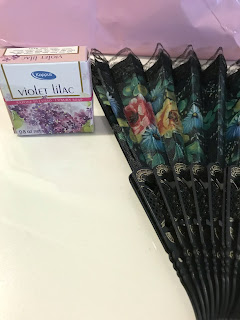 I was given the following gifts from ladies who went on the trip: A tea-themed night shirt with matching mug and a pair of tea-themed socks. 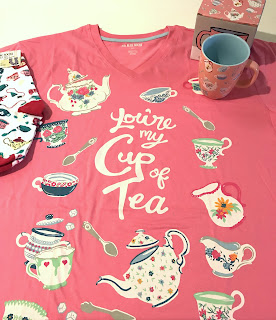 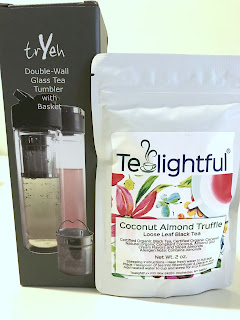 A beautiful hand-crafted, tea-themed necklace.  [This picture doesn't do it justice.]  At the end of the necklace is a teapot tea infuser, and above it is the face of a vintage watch [symbolizing tea time]. 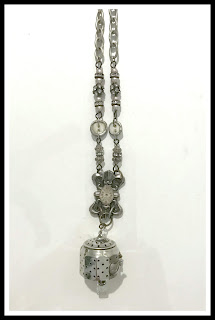 A Gone with the Wind DVD set.  You'll understand its significance in a future post. 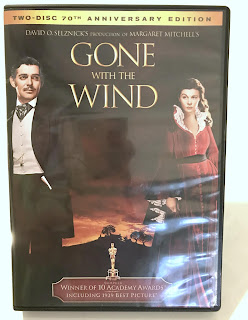 I was also gifted with two generous gift cards to P.F. Changs and Cracker Barrel.  Thanks ladies for your thoughtfulness and generosity!  The best gift of all was that everyone had a great time on the trip!

After our gift exchange we were off to bed.  We loaded the van on Wednesday, May 16th at 8:00 a.m. destined for Woodstock, Georgia, where we had 1:30 p.m. reservations at Tea Leaves and Thyme tearoom.  But before leaving Cumberland Inn we took a few pictures. 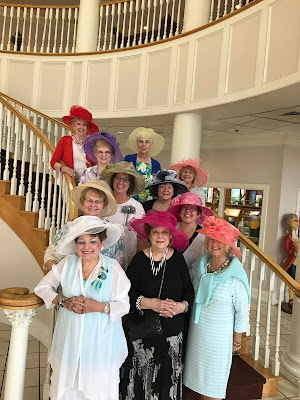 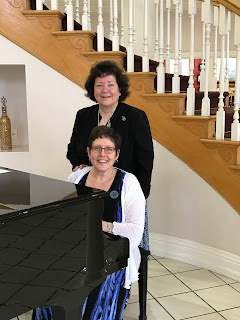 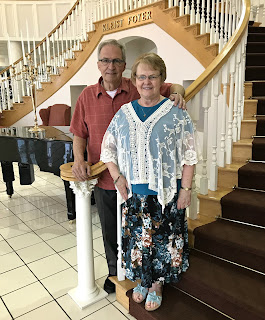 I took the picture below of Jerry at breakfast standing next to an Indian statue - Cumberland's mascot until 2001, then it changed to Patriots. 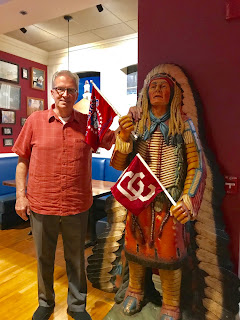 The ladies pointed out the milk dispenser in the breakfast area which was from 'Southern Belle' dairy.  If you recall, our original trip was going to be called Southern Belle Tea Tour, but I didn't want to jinx our trip by reusing the former name twice [even though I don't think of myself as superstitious ;-)], and settled on Southern Tea Time Getaway instead. 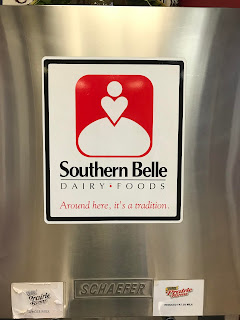 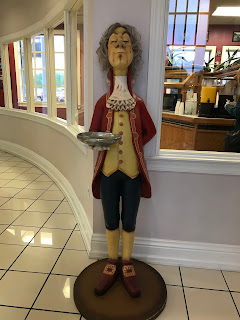 More pics of the Inn's foyer. 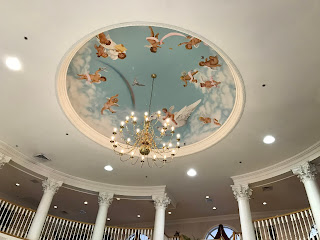 Can't you envision an elegant tea in this room with glistening silver teapots? 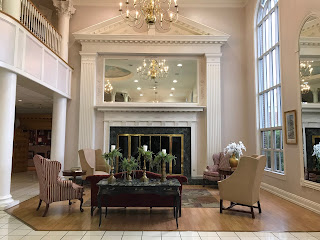 Posted by relevanttealeaf at 1:00 PM