I'm interrupting the Questers Tablescapes series to show you the finished office renovation. I didn't have time to download the tablescape photos and edit them today.  I will get back to the series soon so you can see the remaining 40 tablescapes.

The decorating part of my office is completed, but not the sorting and organizing of paperwork, files, books, and memorabilia. The two large computer desks held a lot of 'stuff' accumulating since 2004 [or earlier] when the bedroom was made into an office. Numerous trash bags have gone to the dump, and the purging [though time consuming] is a sense of accomplishment.  My children will will be grateful someday!

In the "before" photo my hubby and I shared the office.  We both had desktop computers hence two large computer desks in one small room!  When my hubby got his laptop he surrendered the entire office to me [actually I probably overran his space!]. When I couldn't stand the clutter and crowded conditions any longer I decided to renovate.  The project began on March 21st. 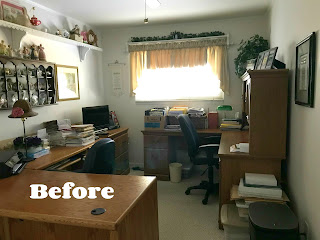 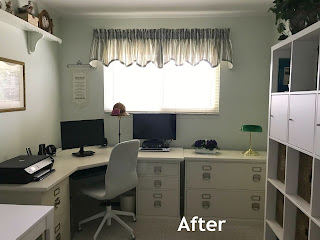 Kudos to my hubby for removing the two heavy/bulky computer desks [by himself and his dolly on wheels], and putting the new furniture in place.  It was no easy task!  I LOVE my new corner desk and lateral file cabinet from Pottery Barn.  The glass desk tops should be ready next week. Hubby painted the walls a light green from beige.  I'm very pleased with the window valance from Wayfair.


Compartmentalized wall unit from IKEA below.  It isn't filled yet, but it will be! 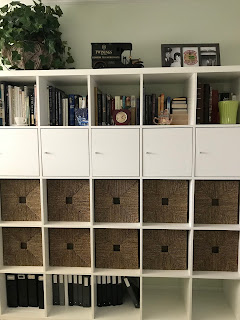 The work table was my hubby's great idea.  It'll be useful for numerous projects - sewing, sorting photographs [my next big project], a place for the grands to draw/color [or whatever] when they come over, and so much more.  It also came from IKEA. 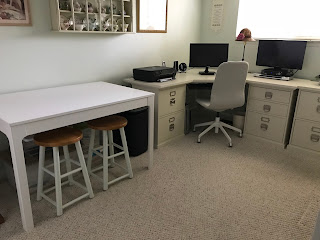 From now on when you read my blog, you can picture me at my new desk, in my renovated office where I'll be writing to you! 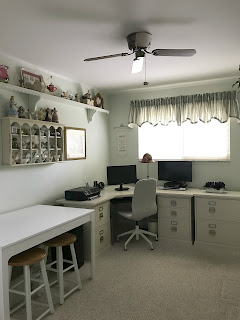