Saturday I attended my 7th Questers Luncheon presented by the Mah-Nah-Be-Zee Chapter. My first one was in their early days when they held the tablescape luncheons in the basement of a church in Mt. Clemens, MI.  They soon outgrew that location, and for several years now the event has been held at Zuccaro's - a large banquet hall.  Saturday's luncheon was their 19th, and they're going to continue one more year to reach their #20th anniversary, and then call it quits.

This year's theme [they're different every year] was "Past, Present, Future" and there were 60 tables.  That's A LOT of tablescapes.  I had to hurry around like a mad woman on a mission to get pictures of every table, while carefully maneuvering around all the attendees.  The doors opened at 11:00 a.m. and lunch was served at 12:30.  There were about 500 attendees.

In case you're wondering what Mah-Nah-Be-Zee means, it's the Indian name given to Detroit's Belle Isle which means White Swan.

Questers is an international organization of study clubs founded in 1944 to educate its members through research and study of antiques; stimulate the appreciation and collecting of antiques and to encourage the preservation and restoration of historical landmarks. 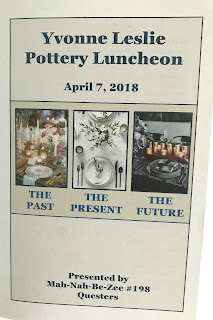 A table was set up in the foyer to whet our appetite for what was to come inside the banquet hall.  Attendees voted on their favorite tables and prizes were awarded. 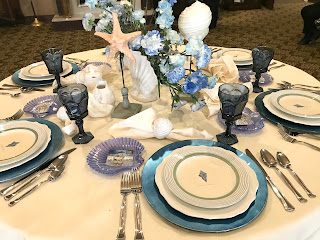 The banquet hall is very large, and even though the photo below is just one row of tables, it gives you an idea of the size of this event. 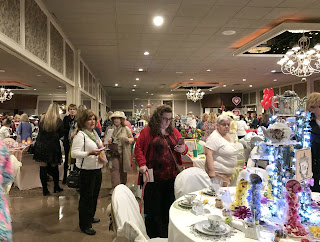 Some ladies wear hats, but many don't.  This is my friend, Linda, [below] who just returned from her winter stay in Florida [but didn't bring sunshine and warm temperatures back with her.  I reluctantly forgave her!  ;-)]. 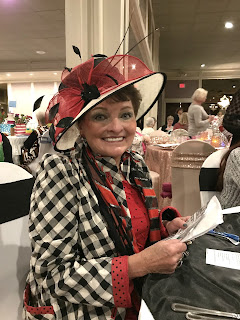 The lady below is Jean.  I met her for the first time last December.  I asked if I could take her picture wearing a jacket she embellished by sewing [not gluing] assorted buttons on the collar and cuffs. The picture doesn't do it justice, but trust me it's beautiful and so unique. Last December she wore a gray jacket like this pink one, sprayed with fabric glitter and embellished with assorted gray, pewter, and rhinestone buttons on its collar and cuffs - a very time consuming task, to say nothing of acquiring the right choice of buttons, and lots of them. 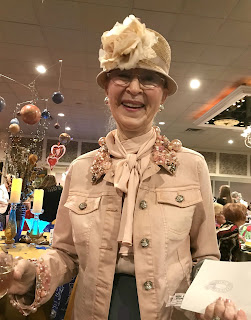 I couldn't resist taking a picture of the shoes another lady was wearing.  She walked very gracefully in them, but I'm certain I'd break my neck!  Each heel consists of a teapot and teacup.  I love all things associated with tea, but I'd have to draw the line here for my safety.  ;-) 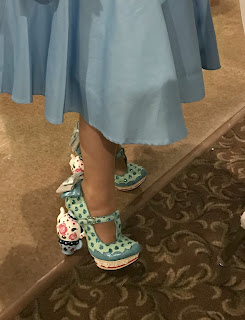 Now for the tablescapes... The #1 winning table was #12 'Industrial Chic - Steam Punk.'  I don't know who the other four table winners were because I left a few minutes early.  If any Quester reading this post wants to tell who they were, please do so in the comments section. 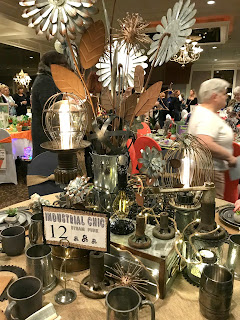 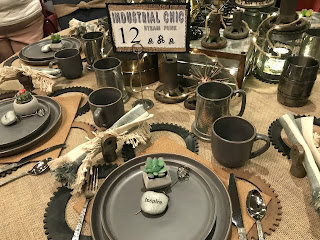 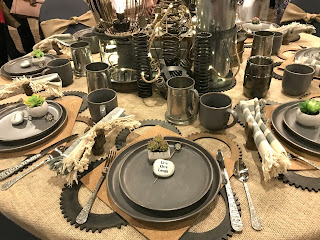 I've met the lady who designed Table #1 - 'A Visit With Old St. Nick' at previous teas.  She and her girlfriend have done many tablescapes for the luncheon over the years.  They will begin working on next year's theme almost immediately.  What dedication! 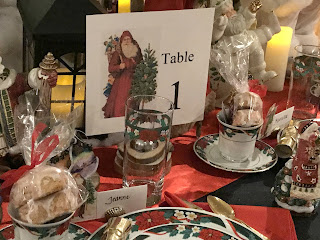 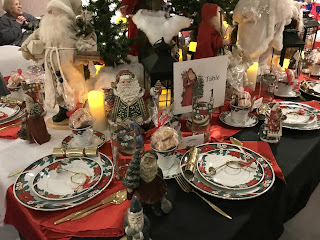 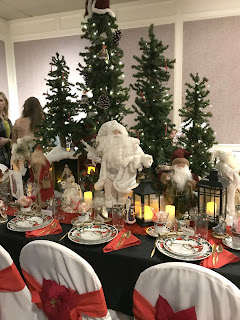 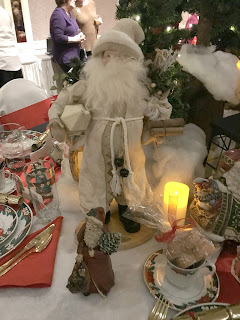 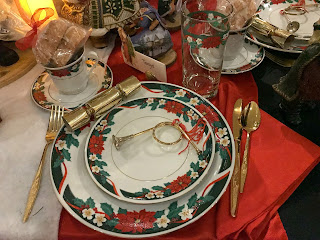 Two tablescapes down, and 58 more to go - tomorrow I'll continue with this great event.

Thank you, Jan, for identifying yourself while we were viewing the raffle tables, and for being a follower of my blog!

I used the majority of my raffle tickets for a basket containing a Lena Liu Butterfly Teapot [among other things], but it wasn't my lucky day! Someday I'm going to stumble across one in a resale shop to replace the one I put in a garage sale! ;-(  Have you ever gotten rid of something and then wanted to kick yourself afterwards for doing something so stupid? 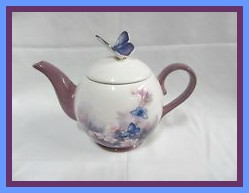