When my hubby brought the mail in on Monday, he was carrying a package he said was for me.  The return address was from my friend, Nancy, who lives in Marquette, MI in the Upper Peninsula.  I hurriedly opened it and found several items inside.  I began by opening the two decorative boxes, and to my delight I found a beautiful 'Crinoline Lady' teacup.

If you recall, the logo for the Southern Belle Tea Tour [that was cancelled last September due to hurricane Irma] was taken from a piece of china portraying a Crinoline Lady. 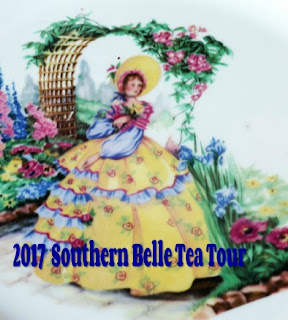 The teacup from Nancy [pictured below] has special meaning for two reasons:  First, it's a keepsake from the trip 'that almost was,' and secondly - most importantly - Nancy gave it to me from her personal collection. Nancy was a blogger until recently giving it up.  Her blog [which can still be accessed] is called Two Cottages and Tea.  I had never heard of Crinoline Ladies until she wrote a couple of posts about them, and shared photos from her collection. You can view her two posts here by scrolling down to October 22nd and July 11th, 2017.  The saucer was in the box with the green gingham lid, and the teacup was in the purple birdhouse style box.  I did a happy dance! 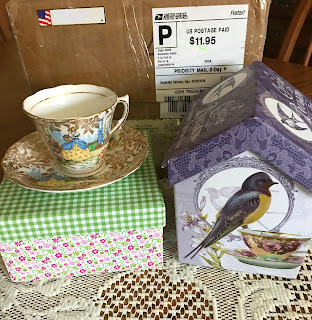 Isn't it beautiful!  It's bone china from England made by Colclough pottery.  The company was founded in 1890 in Staffordshire England by Herbert J. Colclough, who was the Ex-Mayor of Stoke-on-Trent.  It is said he was the man who brought fine bone china to the ordinary people.  Thank you, Nancy!  I will treasure it always. 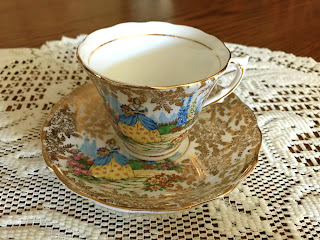 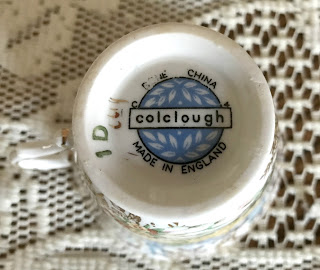 Also in the box were Wild Huckleberry tea and scone mix from the Upper Peninsula. 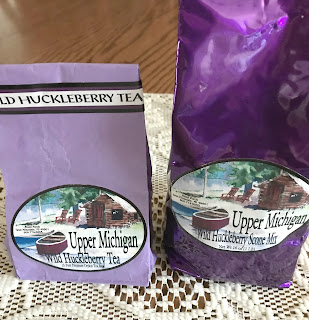 And a tea-themed Heritage Lace doily with a blue teapot drawing by Sandy Clough. 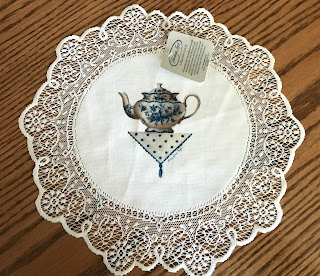 I haven't said anything about the rescheduled trip on my blog until now, but it's rescheduled for May and there are two openings.  If anyone is interested in details e-mail me.  Nancy also enclosed two items to go in the gift bags which I'm not posting because I want them to be a surprise for the participants. She would have been a participant in the first trip, but is unable to go on the upcoming trip.

We'd love to have you join us.  There will be a total of 10 participants [not counting me], and a great itinerary has been planned.

Posted by relevanttealeaf at 10:05 PM