As the week winds down and I take the weekend off from blogging, I have three unrelated things I wanted to share.  The first was a surprise envelope I received in the mail from a local blog follower. 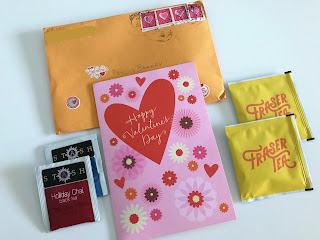 Laura had read about the Valentine's Tea/Luncheon at Samaritas Senior Living last Sunday from a newspaper article promoting it.  She had planned to come until the snow storm made travel foreboding.  So instead she sent a Valentine card with the newspaper clipping, a coupon for P.F. Changs, and some tea bags/sachets.  The newspaper article was actually the same invitation that was placed on each table at Samaritas the day of the tea luncheon.

She mentioned in her note that Fraser Tea was blended locally in Livonia, MI.   I had never heard of Fraser Tea before, so the tea packets definitely piqued my interest. I immediately went to their website at frasertea.com, and found the story of three brothers and their adventure into the world of tea very interesting.  Of course, I had to brew a cup of their tea.  The packet I sampled was Watermelon Oolong.  The steeped sachet produced a pale greenish/faint amber hue, with a wonderful watermelon aroma. The taste was light and refreshing, and was just as good on the second steep as the first.

Their website gives the description "a virtual summer picnic in a cup!"  Watermelon Oolong Organic Tea combines fresh blueberries and tropical flavors [coconut, mango, papaya, and pineapple] with lemongrass, osmanthus and cornflowers to produce a delicate, fruity taste.  I highly recommend this tea, and I will definitely be contacting Fraser Tea.  I couldn't find when their company was founded, but I'm thinking it's relatively new.  Thanks so much, Laura, for introducing me to this local tea purveyor/blender! 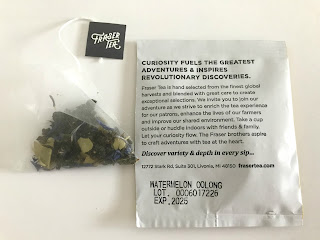 Secondly, I received my DNA results from Ancestry.com on February 8th.  No wonder I love Great Britain so much - it's in my blood! 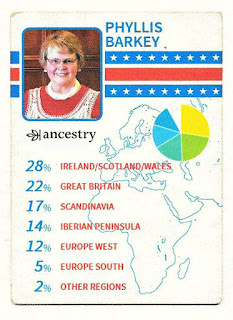 I had always been told by paternal relatives that I had some American Indian and German in my blood, and some French from my mother's side. Western Europe [according to Ancestry.com] stretches from Amsterdam to the peaks of the Alps, and is dominated by France to the west and Germany to the east, so my slight French and German heritage is 12%.  28% Ireland was no surprise since my maternal grandfather's surname name was Sullivan. There wasn't a drop of American Indian!  ;-)  Now I know for certain my earthly ethnicity.  As a side note: even though it doesn't show in my DNA [but I hope it's visible in my lifestyle] when I accepted Jesus Christ as my Savior, I became a child of God. And that ancestry - available to everyone - is the one that truly matters.

The DNA kit was a Christmas present from my son and his family.  Steve received a kit as a Christmas gift from his wife in 2016, and he was anxious to compare his DNA to Jerry's and mine.  Jerry is still waiting for his results to come back. 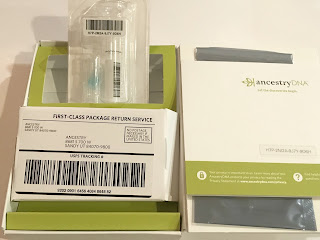 Last, but certainly not least, my daughter went to visit her grandaughter [my great-granddaughter] yesterday, and Tiffany posted the picture below of Evie and Lori on Facebook this morning.  It was so cute I just had to share it.  Evie is 9 months old now and crawling.  A visit to Grand Ledge to see her is on the horizon! Isn't she adorable? Of course, I'm very prejudiced! ;-) 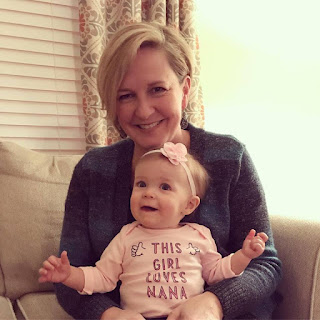 Posted by relevanttealeaf at 1:35 PM