Tea Tasting at The Rendezvous With Tea

Last Saturday I received a call from Naszreen Gibson, the owner of The Rendezvous With Tea inviting me to a tea tasting yesterday.  In going over previous posts I discovered this was my 14th tea tasting at the shop spanning June 2014 until now.

Below is a photo of the shop, but it wasn't taken yesterday.  I parked in back of her shop and didn't want to walk around to the front in the cold to get a current picture, but it hasn't changed much. 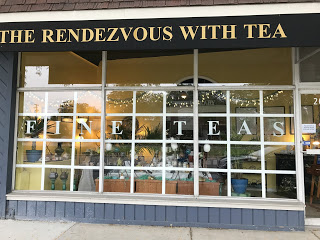 I arrived a little before the tasting began at 11:00 a.m., so took some inside photos of her shop.  She has a lot more tea merchandise displayed since I was there last September. 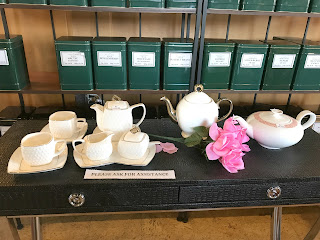 ~ One of the signs displayed in the shop. ~ 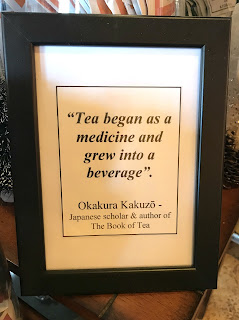 Retail area at the front of the shop.  The snow covered tree is most appropriate for right now. 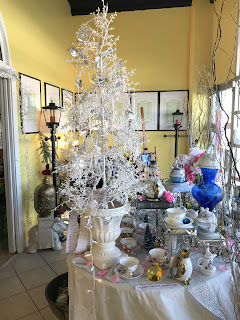 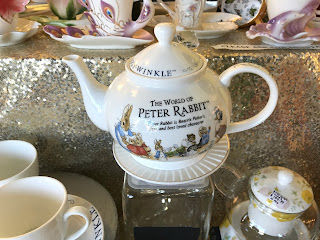 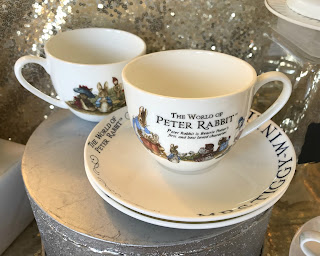 The tasting area at the back of the shop was ready and waiting. 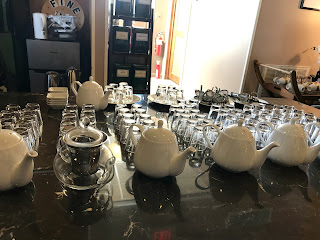 There were nine attendees.  As usual, Nazarene presented eight teas to taste.  One white [called Blush from China]; one  white/green blend [called Silver Leaf  Rings from Sri Lanka]; one oolong [called Champagne from China]; one purple tea [called Purple Reign from Kenya]; two black [Zhen Qu Golden Buds from China and Hot Chocolate - one of Naszreen's blends from Sri Lanka with pieces of chocolate and red chili flakes]; one green tea and herbal blend [called Calm, Soothe, De-stress, a blend of Naszreen's]; and one herbal [Relax Blue also a blend of Naszreen's].

Naszreen showed us a compressed Pu-erh cake, even though it wasn't part of the tasting. 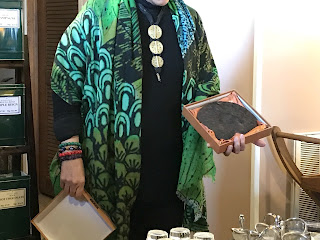 She always gives a very informative presentation telling about tea's history, the different types of tea, how they're processed, etc. 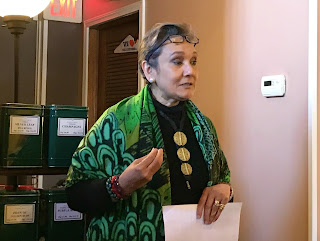 I only took photos of loose tea from two of the teas we sampled.  Silver Leaf Rings because the tea is literally rolled into circles by hand, and Zhen Qu Golden Buds because of its wiry black and gold buds. 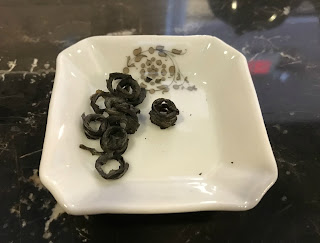 Zhen Qu was one of the teas I had tasted before and really liked.  I purchased some to take home, and wished later that I had done the same yesterday.  It has a very smooth taste, with a lovely aroma. 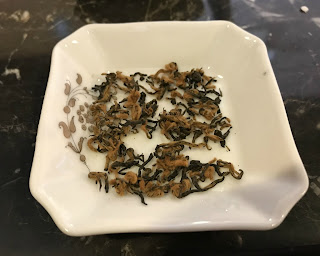 I had also sampled the Relax Blue herbal tea previously.  It's a blend of chamomile, peppermint, lemongrass, lavender and blue pea flower, which turns the infusion into a beautiful, tranquil blue color when steeped.  It's her best selling herbal tea. 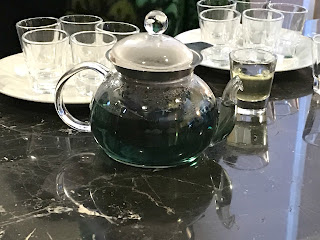 We tasted the Hot Chocolate black tea two ways.  First as a normal infusion without any additions, which was very good.  You could definitely smell and taste the chocolate pieces.  Then as a literal hot chocolate with milk [or half and half] added and a bit of cayenne pepper for an extra bit of heat. 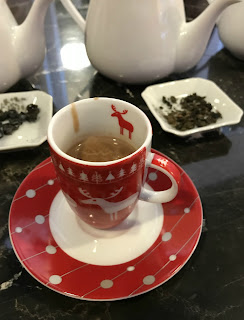 As always, at the conclusion of the tea, Naszreen served some delicious refreshments.  A slice of Smoked Gouda Cheese and Herb Quiche; a Chocolate Caramel Bar on Scottish Shortbread made with green Earl Grey Lavender tea; and a slice of Red Velvet cake made with her own Temasek Splendour black tea blend that contains Raspberry pieces and Hibiscus petals.  The raspberry came through very nicely.  Everything was homemade by Naszreen and was delicious.  The goal, however, is to showcase the fine teas, not the food. 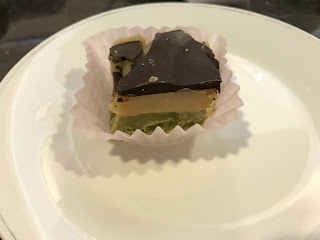 As you can see, I wasn't the only shutterbug in attendance.  The other shutterbug posts her photos on Instagram [TheDtrtr which means The Detroiter.  Her photos are all things Detroit]. 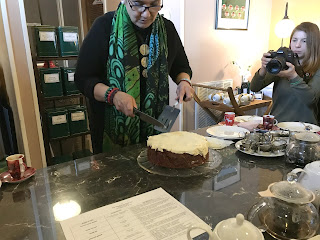 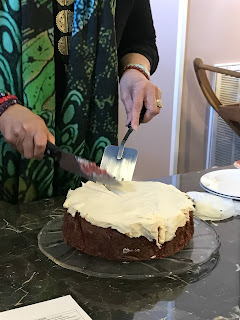 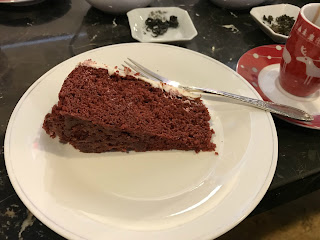 As a take home treat Naszreen made the cake into individual roses and put it into adorable takeout boxes complete with a tea phrase on the back. 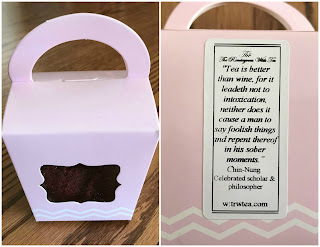 I took mine home to my hubby since I had already eaten a generous piece at the tea shop. 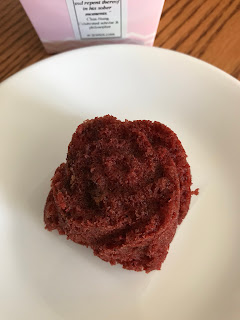 In addition to the two bone china teacups, I also purchased 8 individual sachets of Naszreen's Michigana tea.   Besides enjoying at home, they're perfect for enclosing in a card to someone, particularly if it's someone out-of-state and you're wanting to convey greetings from Michigan.  They are 8 sachets for $8.50. 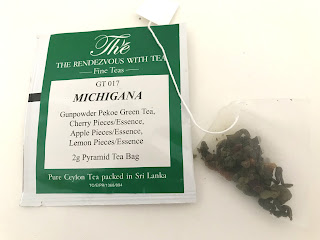 On a totally unrelated subject, Happy Paczki Day!  Have you had your paczki [pronounced PUNCH-kee] yet? It's a Polish jelly [or custard] filled donut that's a huge tradition in the Detroit/Suburban area.  Paczki day is also known as Fat Tuesday, the last day to 'indulge' in feasting before Lent begins tomorrow [Ash Wednesday].  I think I'll pass since one paczki contains anywhere from 300 to 450 calories each and has 15 to 24 grams of fat.  Tea is much better for me!

It's also Mardi Gras - the last day of the Carnival Season [which began on Epiphany, January 6th.] I'm sure things are hopping in New Orleans and other areas.  Below is a picture of a King Cake I made in 2013.  I haven't been that ambitious since!  ;-) 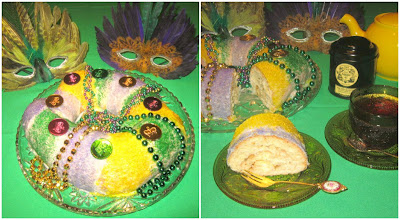 Today is also known as Shrove Tuesday in Great Britain.  A day for eating pancakes!

Posted by relevanttealeaf at 1:36 PM

Email ThisBlogThis!Share to TwitterShare to FacebookShare to Pinterest
Labels: Rendezvous With Tea