One of the nicest things about the Christmas Season is getting together with family and friends.

This afternoon a dear friend - who's like a daughter - drove over to my side of town for 1:00 p.m. lunch reservations.  Mother Nature sent another snowfall, but Ruth arrived safe and sound.  We had a nice time visiting over lunch and getting caught up on each other's family.  Our server loved her British accent [and so do I!].

Sajo's restaurant has a nice ambiance.  They also have a tableside tea chest of Bigelow teas, from which I selected Earl Grey to go with my Pecan Chicken salad.   Ruth ordered a BBQ Korean Salmon salad.   We were so busy chatting, I forgot to take pictures. 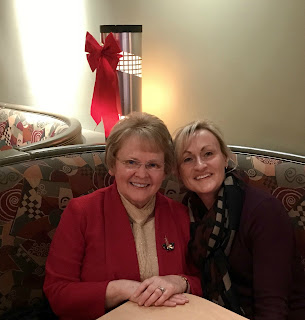 She brought me a beautiful Christmas floral arrangement. 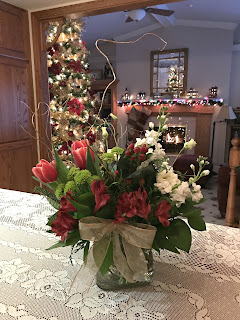 I was home just a short time, then I left for Oakland Mall's Macy's Lakeshore Grill for the annual Christmas gathering Mike Hauser coordinates for former J.L. Hudson Department Store employees, and a few who weren't employees but loved the store [which includes me].  Due to the bad weather, some who live a distance didn't attend this year so Mike will schedule another gathering later in January.

I wasn't hungry after just having a big lunch, but I ordered a bowl of Canadian Cheese Soup [which Hudson's was known for], and a popover came with it. 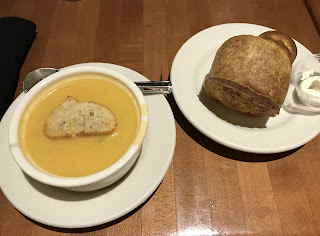 I shouldn't have done it, but I ended up ordering a hot fudge cream puff for dessert.  It was SO good, and I don't even want to know how many calories were in it! 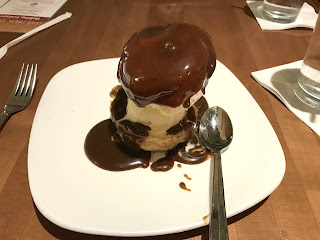 I listened as they shared their Hudson's memories, and the recent ground-breaking ceremony for Detroit's new tallest skyscraper to be built on the site of the old Hudson's store.  Mike Hauser was at the ceremony, and said J.L. Hudson, Jr. [great-nephew of the store's founder] joked that he hoped somewhere in the new building would be a restaurant that would serve the store's iconic Maurice Salad.  We visited until the restaurant was ready to close at 8:00 p.m., and posed for our group picture before leaving. 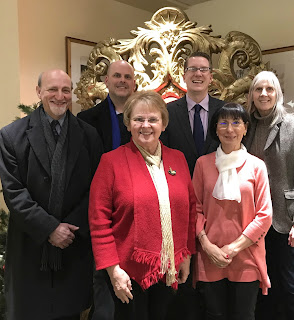 Mike Hauser is on the far left.  The petite lady standing next to me [Grace] was a Hudson's personal shopper - back in the day when there was such a thing as customer service!

Posted by relevanttealeaf at 10:38 PM