After writing my blog post last Tuesday about the Southern Belle Tea Tour, someone asked about the history of Polly Claire's tearoom, located inside the Dent plantation house.  It has a fascinating history that's worth sharing, and will be the first stop on the tour. 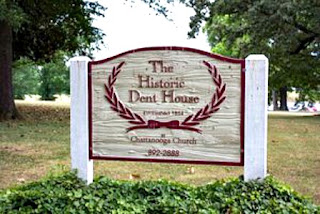 The historic 163 year old plantation house was built on 320 acres and is nationally registered.  It was built by Colonel Jarret Dent in 1854 when he moved to the area to expand the railroad in Chattanooga. During the Civil War Colonel Dent left for Dallas Texas. For his family's safety, he snuck away in the night since he owned 22 slaves.

The house was occupied by "bushwackers" who looted plantation homes across the south to trade or sell the plunder.  It is also believed the house was used as a military field hospital based on the many graves marked nearby.  As an interesting point of trivia, Jarret Dent's cousin was First Lady Julia Dent, who married General Ulysses S. Grant, the 18th President of the United States.

Colonel Peak bought the home from Jarret Dent just after the war ended.  When he saw the beautiful trees he exclaimed, "Oh, the Bonny Oaks!" and the area has retained that name to this day. Upon Peak's death he deeded the house to the city of Chattanooga and it became Bonny Oaks Children's Home.

Rashelle Stafford purchased the house in 2016 from a neighboring church and turned it into Polly Claire's tearoom and a venue for special events. The tearoom gets its name from her two daughters, Polly and Claire.  It's Chattanooga's last surviving plantation.  Isn't it beautiful?  A lovely gift shop exists inside too! 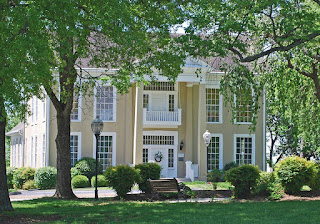 I have one clarification to make about last Tuesday's post.  Originally I directed it to readers who live in Michigan and Ohio, because I thought anyone living any further away wouldn't be interested in attending due to additional travel expenses.  But the tour is not restricted to Michigan and Ohio residents. It's open to anyone who would like to participate, and I have amended my post to reflect that.  Sorry for the confusion.

Posted by relevanttealeaf at 10:50 PM