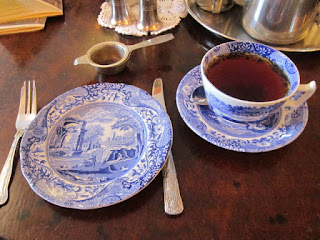 When I opened my AARP newsletter this morning the headline read: "This Beverage May Cut the Risk of Dementia", so of course I clicked on the link to open it.  The article had the subtitle, "Daily Tea for Your Brain", and it made my heart happy!

The article was written by Candy Sagon in March 2017 for AARP.  In it she states people who drank at least a cup of tea a day - green or black - received the most benefits in terms of brain health according to new research by the National University of Singapore.

One cup is good, but three is even better to reduce the possibility of dementia among older adults by 50%!

Findings from the new study were published in the Journal of Nutrition, Health & Aging.  It also showed that those who were genetically at risk for developing Alzheimer's disease, could possibly cut their risk by 86% if they drank tea regularly.

Research in Norway, China, and the United States have linked drinking tea with better cognitive performance and a lower risk of cognitive decline.

Both green and black tea are protective, but they need to be brewed from loose leaf tea. Fortunately, many tea purveyors are putting loose leaf tea in teabags now instead of fannings.  The test results don't apply to fruit or herbal teas.

Now that's news worth drinking to!  Below is a favorite picture of my dear daddy and me having tea together.  He passed away in 2011, but the Lord allowed him to be with us for 93 years. On that particular day I had taken a 'traveling tea party' to him and my mother. 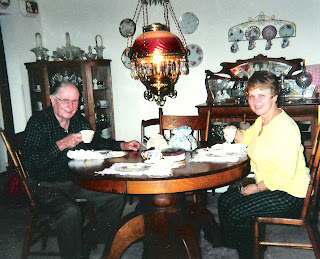 For those who're interested [and even those who aren't ;-)], below is a picture of my sweet great-granddaughter, Evie. Her mommy just posted it four hours ago. She's one month old today.  Is there anything more beautiful than a baby? I'm off to make myself another cup of tea to increase my chances of having a sharp mind while watching her grow up!  ;-) 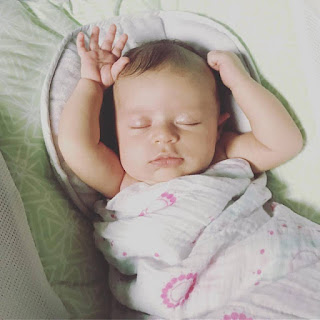 Posted by relevanttealeaf at 1:22 PM

Email ThisBlogThis!Share to TwitterShare to FacebookShare to Pinterest
Labels: The benefits of tea